One of the more underrated rock bands to come out of the Detroit area in the 1960’s Mitch Ryder And The Detroit Wheels released a series of hit singles and three albums in the mid to late 1960’s led by the vocals of Ryder and featuring the incredible work of future Cactus founder guitarist Jim McCarty and drummer John Badnajek.

Especially known for the medleys the group released combining well known rhythm and blues tunes, the band had three consecutive top ten and a total of six top forty singles. RPM Records has compiled the three albums released by the group along with all their non-LP single sides, an album of Ryder singing hits of the day and his first solo LP on a new three disc, sixty five track collection, making it the most complete collection of this hit making quartet and its blue eyed soul lead vocalist.

Disc one collects the two 1966 albums released by Mitch Ryder And The Detroit Wheels beginning with ‘Take A Ride’ which takes its title from the top ten single ‘Jenny Take A Ride’ a medley combining Little Richard’s ‘Jenny, Jenny, Jenny’ and Chuck Willis’ ‘C.C. Rider.’ The rocker features McCarty’s red hot guitar and a heavy beat led by Badnajek’s drums. While best remembered for the single the LP is filled with highlights. The album opener ‘Shake A Tail Feather’ was a staple of the band’s live set and a showcase for Ryder’s blue eyed soul vocals, McCarty’s guitar and Badnajek’s drums. Jm McCarty’s lead guitar work shines throughout with notable solos on ‘Come See About Me’ made popular by Diana Ross and The Supremes, ‘Just A Little Bit’ ‘I Got You’ (the familiar James Brown number), ‘I’ll Go Crazy’, ‘Sticks And Stones’ made popular by Paul Revere and The Raiders and ‘Baby Jane (Mo Mo Jane)’. Badnajek’s drums are especially notable on the album’s opener and ‘Please, Please, Please’. The group’s second long player ‘Breakout……!’ takes its title from the driving rock single that the band expected to be a big hit but topped out at a disappointing #62 on the charts despite fine guitar work from McCarty and Ryder’s gorgeous vocals. The LP’s big hit, the band’s biggest, was another medley ‘Devil With A Blue Dress On/Good Golly Miss Molly’ combining a Shorty Long tune with another Little Richard number. The single reached #4 on the charts with its combination of McCarty’s blazing guitar, Badnajek’s pounding drums and Ryder’s tasty vocals, making the tune perfect for AM radio. The album was originally released without the single and it was only after its inclusion that the LP reached the top 40, topping out at #34. The remainder of the album was mainly covers of well known hits of the day given the group’s distinctive touch. These included ‘In The Midnight Hour’ a smash for Wilson Pickett, Rufus Thomas’ ‘Walking The Dog’ and ‘Little Latin Lupe Lu’ made famous by The Righteous Brothers, which reached #17 when released by Mitch and company as a single. As with its predecessor, the group’s sound was dominated by Ryder’s vocals, McCarty’s guitar and Badnajek’s drums. 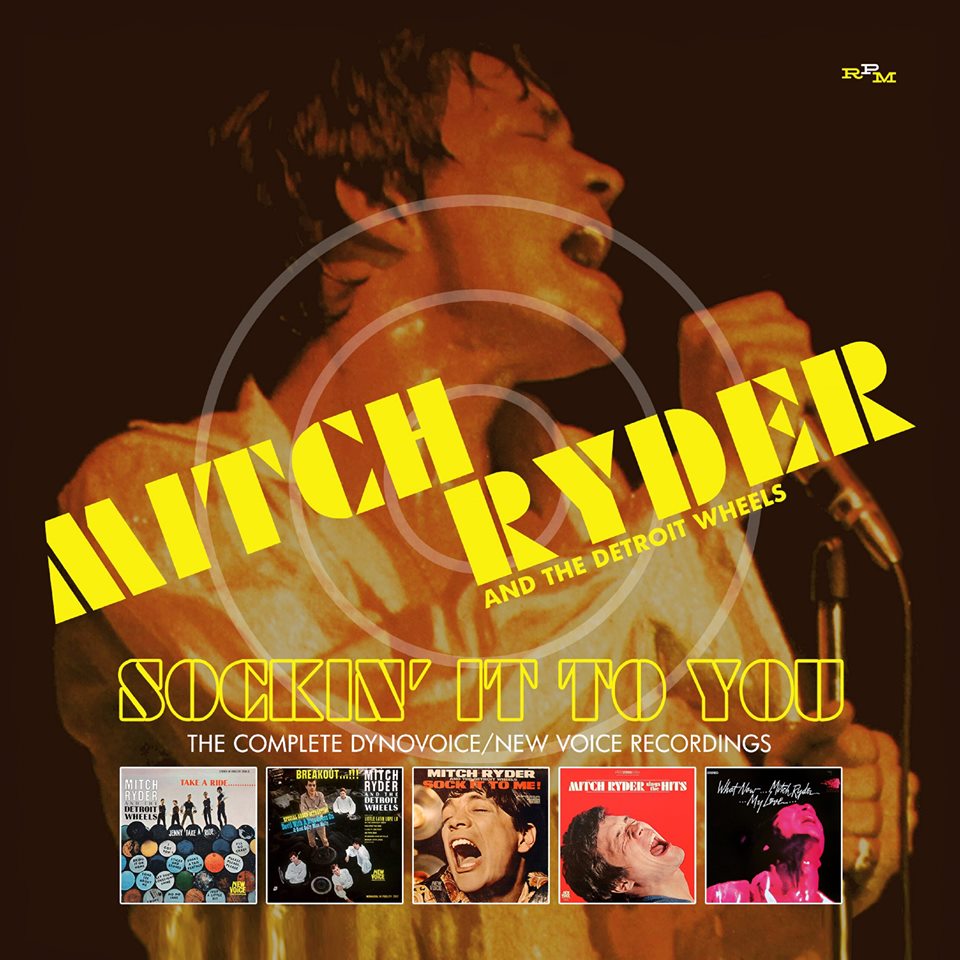 Disc two opens with the 1967 LP ‘Sock It To Me!’ whose opening tune became the group’s third consecutive top ten single reaching #6 on the charts. The album would be the last released by Ryder with the Detroit Wheels and while it certainly has its moments it does not quite measure up to the band’s previous two in the opinion of most. The first track was released in two distinctively different versions, the one included on this set being much more uptempo thanks to McCarty’s guitar and Badnajerk’s driving drums. Of special note are ‘Takin’ All I Can Get’ with its fuzz filled intro by McCarty, ‘Breakout’ featuring a notable solo by McCarty and ‘I’d Rather Go To Jail’ with another fuzzed out intro by McCarty and Badnajek’s pounding drums. The LP was a harbinger of things to come with the cover of Bacharach/David’s ‘Walk On By’ foreshadowing Ryder’s soon to follow solo career as envisioned by band producer and label owner Bob Crewe, although the instrumental ‘Slow Fizz’ did supply a nod to the group’s R&B roots with McCarty and Badnajek leading the way as did ‘A Face In The Crowd’. The album closer ‘Wild Child’ straddled the fence with McCarty’s fiery guitar joined by Ryder’s balladish vocals. ‘Too Many Fish In The Sea/Three Little Fishes’, the final single released by Ryder with The Detroit Wheels, came from a greatest hits album and was yet another medley, reaching #24 in 1967 The tune was a true R&B stomper finale with more impressive guitar work by McCarty. The disc is finished out by an album of Ryder singing hits of the day with studio musicians rather than The Detroit Wheels accompanying him. The songs were re-recordings of tunes such as ‘Walking The Dog’ ‘Sticks And Stones’ and “I Got You’, mainly rhythm and blues tunes well fitted to Ryder’s vocals, with notable exceptions such as ‘Walk On By’ and the old standard ‘You Are My Sunshine.’ The album showcases Ryder’s vocals and is a fine collection in its own right, but does not have the rock element supplied by McCarty and Badnajek and is included for reasons of completeness as much as spotlighting Ryder’s vocal abilities.

Disc three opens with Ryder’s first solo album of material not previously recorded by the vocalist. The LP is a combination of hits of the day such as ‘What Now My Love’ made popular by artists such as Elvis and Petula Clark as well as rock standards such as Jerry Lee Lewis’ ‘Whole Lotta Shakin’ Goin’ On’ and Chuck Berry’s ‘Brown Eyed Handsome Man.’ While the recordings may not be as interesting to rock fans as those done with The Detroit Wheels they certainly document the vocal abilities of Ryder and his appeal as a solo entertainer beyond the rock realm. The album was intended to launch Ryder’s solo career which was not as successful as hoped, but certainly not because of a lack of ability on the vocalist’s part. The disc also contains seven non-LP single sides, including two interesting medleys, one combining the popular standard ‘Personality’ with ‘Chantilly Lace’ made popular in the 1950’s by The Big Bopper and another pairing ‘Baby I Need Your Loving’ with ‘Theme For Mitch’. The disc, and box set, is closed out by a radio promo for Mitch and The Detroit Wheels, a most fitting finish for a most interesting compilation.

‘Sockin’ It To You: The Complete Dynovoice/New Voice Recordings’ comes in a quad-fold digipak and contains a twenty page full color booklet with complete song annotations, lots of photographs and memorabilia and an informative essay by Bob Fisher. The sound quality is wonderful thanks to the mastering job of Simon Murphy. The box set will appeal to fans of Mitch Ryder and 1960’s Michigan rock as well as fans of rock music of the period in general and comes highly recommended. Sadly, RPM Records recently announced it will soon cease to produce new reissues. The label will sorely be missed because of fine quality reissues such as this. – Kevin Rathert