‘Welcome Up: Songs of Space and Time’ by Paul Levinson

‘Welcome Up: Songs of Space and Time’ by Paul Levinson

Welcome Up is a collection of eight songs that beam you up into a creative galaxy where you take on the persona of an astronaut exploring sonic spaces that at times are reminiscent of The Beach Boys on tracks like “Welcome Up” and “Tau Ceti;” and at other times can feel like the MC5 being shot out of a ray gun on tracks like “Samantha.”

Chris Hoisington of Old Bear Records knew of Paul from his 1972 album release Twice Upon A Rhyme that has since been reissued four times (once in Japan and once in South Korea!). Chris felt that Old Bear could make a great album with Paul that combined Paul’s penchant for all things science fiction with Paul’s natural musical bents towards sunshine-pop and psychedelic folk-rock.

Welcome Up is the title of your new album being released on Old Bear Records. Are you excited about it?

Excited doesn’t do it justice! The creation of Welcome Up and its release by Old Bear has transformed my life and smiled on my soul in the deepest way.

“I’m not just a professor and a writer, I’m a songwriter and a singer.”

To give this context. Way back in 1972, when my previous album, Twice Upon A Rhyme, was first released, I was just a songwriter, singer, and record producer. I soon became a writer of articles about music, then a media scholar, then a professor, and then a science fiction writer. And though my music never left me, it receded to a place way in the background. That began to change in the 21st century. Taro Miyasugi’s review of Twice Upon A Rhyme in a Japanese magazine in 2002, Beatball bringing out the album on CD in 2006, Anthony Nyland’s re-issue of the LP on remastered vinyl in 2009, Sundial Symphony’s (Don Frankel & Robbie Rist) recording of some of my songs in the past decade, all brought my music back into my life, but they were more like flares than head-to-toe transformations of my life.

Welcome Up is something very different. As soon as I started preparing songs for the album, and increasingly as I recorded it, and now cresting with its release on Old Bear, I’ve been feeling like a different person. It’s like the person I was in 1972, long living in a room somewhere in my brain, is now back with me. Nowadays, when I walk into a classroom to teach, when I’m on a panel at a science fiction convention, when I’m interviewed about some political issue by the media, I’m not just a professor and a writer, I’m a songwriter and a singer. And that feels incredibly satisfying.

Was it difficult to start? Did you write new material especially for this album?

Welcome Up is all of those. Here’s the story with each of the eight songs:

“Picture Postcard World” (words & music by me) and “Cloudy Sunday” (words by me, music by Linda Kaplan) were both written in 1968.

I wrote the first verse – words and music – of the song “Welcome Up” also in 1968. The song was for Tina, who was then my girlfriend. I put the song aside. We got married in 1976, have two kids, and now two grandchildren. At her suggestion – she was very patient – I finished the song in September 2018, when I was getting songs ready for the album.

I wrote the words, and Peter Rosenthal the music, to “I Knew You By Heart” and “Alpha Centauri” in 2000. Peter played guitar on every song on Twice Upon A Rhyme, and had written the music to one of the songs, “Antique Shop (The Coming of Winter)” (words by me) on that album. We had been out of touch for years. Peter saw me on a television show where science fiction writers were talking about the new millennium, at the end of 1999, and he contacted me. We decided to write some new songs, and that’s how “I Knew You By Heart” and “Alpha Centauri” came to be.

I wrote the first verse to “Samantha” in 2005 – just the words. I finished the song, words and music, in September 2018, when I knew I’d be recording a new album for Old Bear Records.

I wrote the words, and John Anealio the music, to “If I Traveled to the Past” and “Tau Ceti” at the end of 2010. Larry Ketchersid, an old friend whose company had published a few of my science fiction novels, introduced John and me. 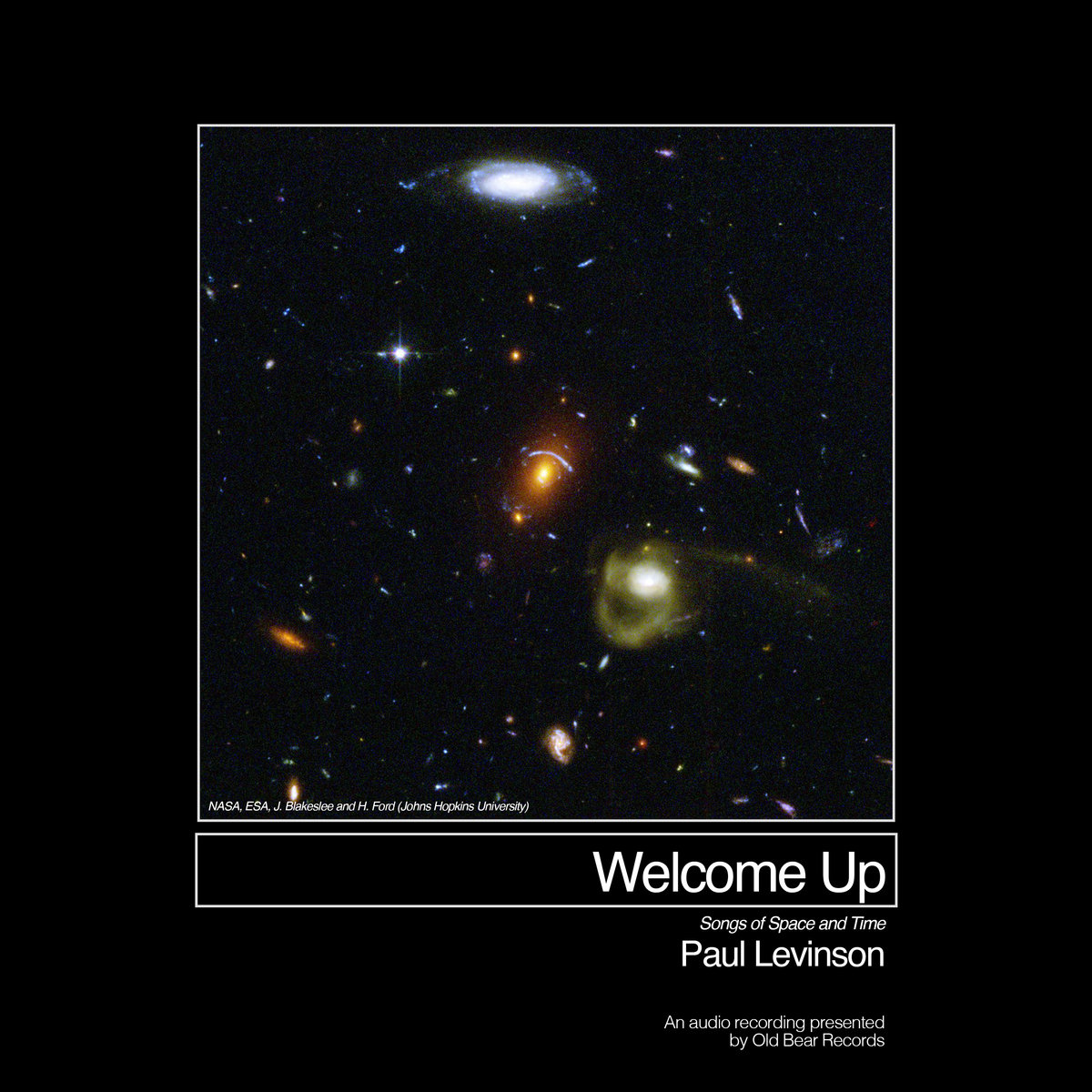 So the provenance of the songs of Welcome Up: Songs of Space and Time is itself a trip across time and space.

We recorded the new album at Old Bear Studios in Batavia, NY – a small, funky, cool town not that far from Buffalo. Tina and I drove up there at the end of October 2018, a great time to do that, because the leaves were turning all kinds of beautiful colors. The studio is located in an old building – the kind you used to find in New York City maybe half a century ago – and on the ground floor was the Moon Java Café, a great little place for eating, sipping, and talking. Chris Hoisington, who produced the album, had assembled a small group of really talented musicians – in fact, just two people, Jeremy Thompson, who played guitar and all manner of electronic instruments like the theremin, and Steve Padin, who played drums and keyboard. And Anthony Hoisington, co-owner of Old Bear Records with his brother Chris, played keyboard. Chris also did multiple harmonies on every track. And after the album was finished, I got Don Frankel, who had played keyboard on Twice Upon A Rhyme (and is now half of Sundial Symphony) to put in accordion tracks on two of the songs, “If I Traveled to the Past” and “Tau Ceti”. And, at the very end of the last track on the album, “Cloudy Sunday,” I did literally one bit of harmony on the word “Sunday” – which is actually something of an amazing accomplishment, if you think about it, singing harmony in 2018 to my 1968 voice, or two voices, from the same person, recorded 50 years apart.

For seven of the tracks, I did home demos of me on the piano, singing the song, and sent them and the chord sheets up to Chris. For “Cloudy Sunday,” I thought the 1968 demo sounded so good that I asked Chris if we could somehow build a new recording out of that. That’s just what we did – the final track on the new album is the original recording of “Cloudy Sunday,” with Chris adding harmonies throughout, me adding a little harmony at the end, and Chris adding all kinds of great sound effects to enhance the mood of the song.

How pleased are you with the sound of the album?

I’m delighted with the sound of the album. Chris and I talked before I went up to Batavia. We discovered that we both had a love of sound effects coming from the most unusual things. Old Bear Studios looks like some Victorian studio taken out of a Dr. Who episode – an episode in the very first series. It has amazing acoustics. We spent three days recording in that studio, and came out with real magic.

The concept is you can use your mind and heart and soul to get beyond wherever you may be on this planet. You can ply time, transcend space, reach into other dimensions. Not everything will go easily. But you can expand your view and purview and realize things about yourself and the world and the people around you. You can take that as science fiction, as metaphor, and mysticism, whatever most pleases you. 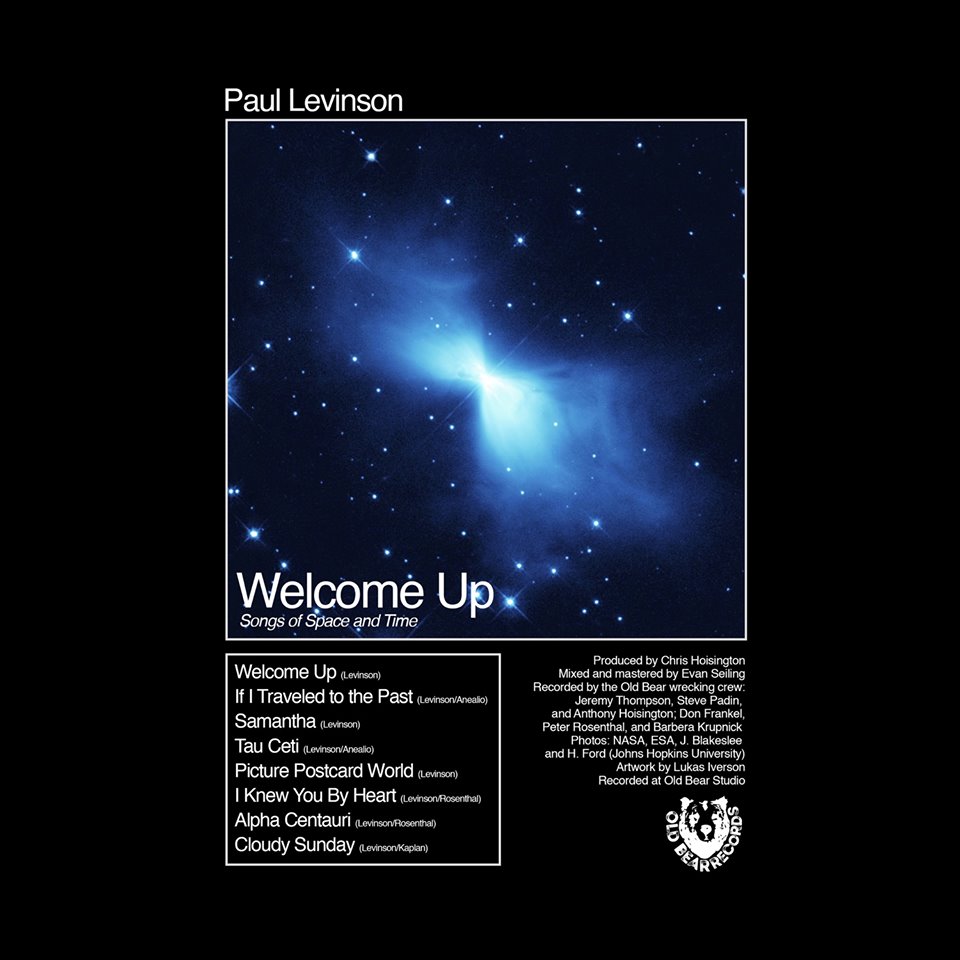 How would you compare it to Twice Upon A Rhyme?

The songwriters are almost the same. There are no songs by Ed Fox or Danny Kaley on Welcome Up. But there are songs by me, writing both words and music, and by me and Peter Rosenthal, and me and Linda Kaplan, just like on Twice Upon A Rhyme. 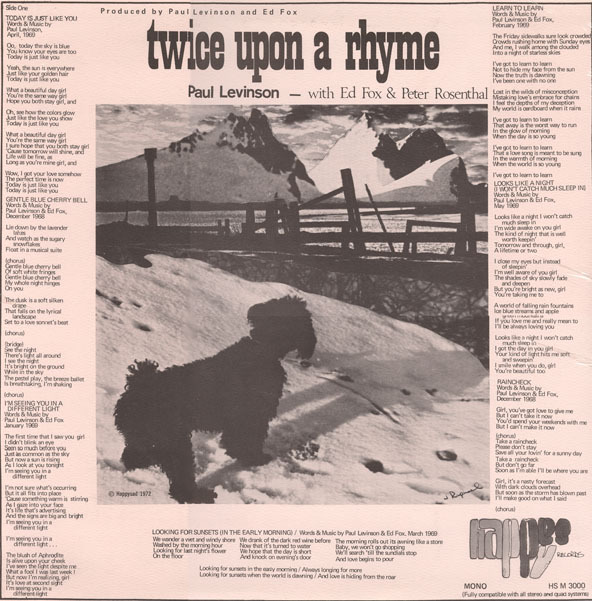 The lead singer is the same – me. Though on Twice Upon A Rhyme I sang lead on most of the songs (Ed Fox sang lead on a few), on Welcome Up I’m singing lead on all eight songs.

But there the similar ingredients end.

Oh, yeah, it’s worth mentioning again that Don Frankel, who played lots of keyboard, including accordion, on Twice Upon A Rhyme, played accordion on two songs on Welcome Up.

But here’s an interesting thing: I think the flavor of the two albums has a lot in common. Not only because of my voice, and the lyrics, and the music I wrote. But I always liked the touch of craziness in some of the productions on Twice Upon A Rhyme, and Chris definitely got that in many of the Welcome Up productions.

Ultimately, I’ll let the listeners decide in what ways the two albums coincide and diverge.

I wrote a new song just last week. I have some lyrics and songs that we didn’t develop for Welcome Up – like “Lime Streets,” which I mentioned in our interview a few years ago about Twice Upon A Rhyme. And I have some old demos of songs I recorded even before Twice Upon A Rhyme, which still sound great to me, and I’d love to bring into a studio and record.

Our grandson is 3 and ½ years old. My son played his son my CD. He didn’t believe it was grandpa who was actually singing. I gave him a copy of the lyrics. He loves to read, and it was an incredible thrill watching and listening to him read the lyrics to some of the songs on Welcome Up. He still doesn’t quite believe that it’s me singing on that CD. This whole trip with my music has been so out of this world, so beyond this reality, I might not be 100% sure myself.