Phil Hayes: I’m originally from England, grew up in the Post Punk era and have played in bands (mostly drums, more recently guitar) on and off since I was about 14. I grew up on the South Coast – not far from Brighton but lived in several different places including Newcastle, Bradford and Huddersfield. My main job has been in theatre and performance, working as a performer and director, but music has always been very important to me and I have continued to make and write songs and music in a variety of groups and situations. I would describe it now as one of the things I do. I’ve been living and working in Zurich, Switzerland since 1998. I suppose I’m known a bit in the independent theatre scene here and at the same time have made music and released records with several groups and individuals. In 2008 I was in a TV show here for a year, so some people know my face a bit from that, but it has no real connection to my reality now. In 2017 -18 I also had a monthly show on Radio Stadtfilter, an alternative radio station in Winterthur.

The Trees consist of Sarah Palin, Martin Prader and you. Can you elaborate on the formation of this lineup?

In Zurich there’s a club called Helsinki which is a converted garage that used to belong to a gas company. It holds around 130 people or so and for some 15 years has been a bit of a meeting place for parts of the local music scene. In particular, every Sunday night the Trio From Hell would play instrumental rock and roll, country, polka etc. It became something of an institution and occasionally individuals like me would get up and sing with them. Sadly the Trio stopped their Sunday night residency at the end of 2019. Anyway, I knew Sarah and Martin vaguely from various Helsinki nights and I’d seen Sarah performing with JJ & Palin there. Late one Sunday night in 2014, probably after I’d sang a song with the Trio, Sarah and Martin asked me if I wanted to have a go at playing music with them. Sarah said she wanted to play drums and Martin would play bass. At first I wasn’t sure if they were joking, we’d had a few drinks and I’m quite a bit older than them, but we exchanged emails and within a week we were already in the practise room.

I had a couple of old songs and we jammed a bit. We quickly discovered that keeping things simple but using our three voices seemed to create something. We worked out 5 songs or so and then played as a surprise act at a friend’s birthday. With Sarah and Martin’s encouragement I quickly wrote a series of simple song sketches which we then worked out together. After about six months we booked two days at David Langhard’s DALA Studios in Winterthur with the intention of recording a 5 Song demo to see what we sounded like and to try and get some gigs. Because we record live as a band, by the afternoon of the first day, we’d already recorded 5 songs or so and so we just kept going. David said he’d like to release it as an album on his DALA Produkte label and so our first album Hooligan Postcards, recorded in just two days and mixed by David, was released in 2015. I’d originally wanted some kind of generic band name like “The Motorbikes” or something, but Martin and Sarah insisted on it being my name plus something, hence Phil Hayes & The Trees.

We played a few times at a bar Martin managed and then started playing at Helsinki Club and then further afield. We got asked to play at a large open-air neighborhood party which I remember at the time felt like we’d made quite a big step. We worked quickly and our second LP Blame Everyone, also on DALA Produkte was released just a year later in 2016. We played played quite a few more shows including some open-airs and the Bad Bonn Kilbi festival and then took a break at the end of 2017 when Sarah and Martin both went away for a while. Martin went traveling in North America and Sarah went to New York for half a year and then played bass with Boytoy.

“Everything gets decided together.”

It’s my name out front and I write most of the basic song ideas, but it’s very much a democratic group. Everything gets decided together. Usually I’ll bring a sketch of a song or I’ll record a short demo and then I’ll bring it to the others. About half of the things I bring get approval or manage to stay interesting for long enough to play. Usually it’s the moment when Sarah and Martin begin to add ideas that the song takes shape or comes alive and then I know it’s probably something we’re going to use. “Anything Everything” is such a song. It has a very simple chord structure and melody, but when Sarah came up with her vocals for it, it completely lifted it. We all play several instruments so we sometimes have suggestions for each other too for what might work. As with anything I do creatively, it’s a collaborative process, which can sometimes be a delicate thing. I’m also not that great a guitar player and usually in a group like ours you would add a lead guitar player or another instrument, but we’ve chosen to keep it simple and use our voices. One or two of our songs I brought along fairly complete with the words and tune finished, but we have a couple of songs that came out of playing together – emerging from a certain beat or a guitar riff or something.

Can you share some further details how your Complicated EP was recorded?

Over the last two years we’ve all had other projects going on, so we knew an EP was more realistic in terms of getting something made after the break we’d had. We asked Ikarus Records if they’d be interested in working with us, partly because we liked some of their bands but also because of how they operate, we felt we would work well with them. We started looking at songs.

“Complicated”, “Anything Everything” and “Don’t Bring Us Down” came together and we recorded them at Yagwud Recordings in Biel Switzerland with Sirup Gagavil. Sirup is the guitarist with Puts Marie and a good friend of Sarah. Sirup set us up in his space and we recorded the songs pretty much live in two days, re-recording the vocals on the second day and adding a bit of percussion and one or two guitar overdubs. Martin’s Bass Amp was in another room, my Amps were covered up with boards but the three of us stood and played close to each other, plenty of eye contact. Martin plays the 4 note guitar solo on “Complicated” because my fingers were useless and Sarah is playing the bass on “Don’t Bring Us Down”. The mix is fairly dry with not a lot of effects meaning that things feel very close. “Here And There” and “Talking Car” we’d recorded a while ago at DALA Studios with David Langhard, but hadn’t released them properly. These songs were recorded fairly loud and live onto a 2-inch 8 Track machine, again with very few overdubs. Recording live to tape also made the mixing process of these two songs quite different. We then sent the five tracks to be mastered together by Adam Gonsalves at Telegraph in Portland.

When I was young I used to have this feeling when listening to a record that you weren’t just listening to a song, that you were listening to a moment in time – to a group of people in a room on the other side of the world in another time and place; and that through the making of the record you could not only listen to the song, you could replay that moment of those people playing and singing together in that room. I hope that our records still have some of that. “Anything Everything” and “Complicated” both got a fair bit of radio play here.

You’re based in Zurich? Do you often play live?

The first three years we played quite a bit. Lately we’ve been trying to organise ourselves to play shows in blocks which is more manageable with other projects. We played a series of shows last December with the release of the EP, but it’s getting harder. Even the small independent scene here seems to have become much more “professional”, much more agencies, much more paid-for promo, showcase festivals etc. I’m not sure how well we fit in this world. We’re playing this week together with Ester Poly who are also part of the Ikarus Records family and we have an open-air booked for early summer too, but I’m guessing more shows will be later on in the year. We’ve never played outside of Switzerland. Manu from Ikarus Records handles our booking. We’re open to offers!

We’re actually just about to discuss them. Whether it’s playing live or recording we’re very much an “in the moment” band. Too much planning doesn’t seem to suit us. But we’d be up for playing more and I have some new sketches of song ideas I’d like to try out.

What other musical activities have you undertaken?

Sarah plays with One Sentence. Supervisor, their latest album Acedia came out last September on Irascible. She also has a new project she’s working on with Sirup Gagavil called Why Dies, they’ll be releasing something this Spring and playing some shows. She’s previously played in JJ & Palin (Meanwhile in Kolin, 2013), and Palin & Panzer and has been involved in many other collaborations including Boytoy.

Martin has his own project, Prader & knecht who just released You’ll Figure it Out on DALA Produkte, plus Martin also plays guitar and sings with Howlong Wolf. He also played in Diebesbande and was involved in a label too.

In England I played in countless bands including The Songbirds and The Hipflasks (A Lovely Scar – Firestation Records). I’ve also played on records and played live with Monomerz, GUZ and Knarf Relloem and I made the Jerry J. Nixon – Gentleman of Rock and Roll album for Voodoo Rhythm Records together with Olifr M. Guz.

I think we’ve said enough. Thanks for your interest. We’re very pleased that our music made a connection with you and maybe through you it might connect with some other people out there too. It’s Complicated…. 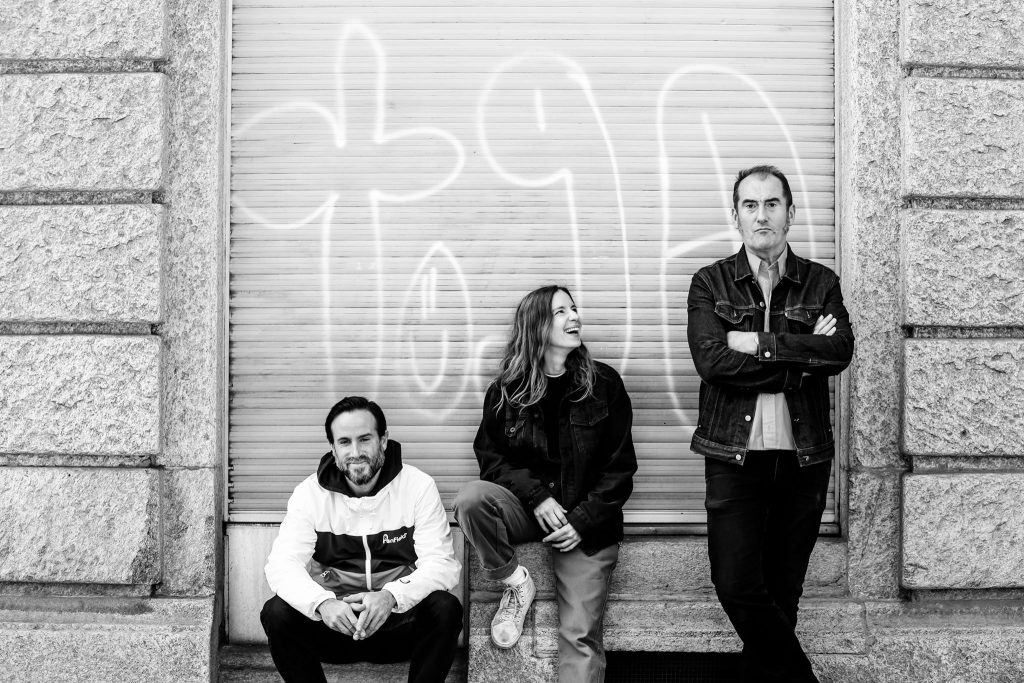