Having concluded their successful tour of the USA in 2018 including a performance onstage with one of their biggest influences from the 1960s music scene (Johnny Echols – Love Revisited), Glasgow (UK) band, The Fast Camels recently released their 4th album Full of Strange.

Drew Sturgeon: I’d say we have quite a distinct but varied sound. The 60s Psych/Freakbeat influences are clear but we’ve stayed true to producing records exactly how we feel at that moment and try not to reproduce a pastiche of our favourite era of music! In this album in particular, we have kept a live and almost raw energy in the majority of the tracks which was our intentions from the get-go! We pride ourselves on melody, harmony and interesting arrangements!

The Camels have been releasing records now since 2007 (The Magic Optician album) when Neon Tetra Records signed us for a one album deal! We started off as a little Glasgow band playing the circuit but that album opened a few doors! None more so than being the only act from the UK to be selected for the 40th anniversary of Monterey Pop! Sadly, our trip was sabotaged by a former member and left the band in disarray for a long sullen spell leading to a chaotic turnover of band members. 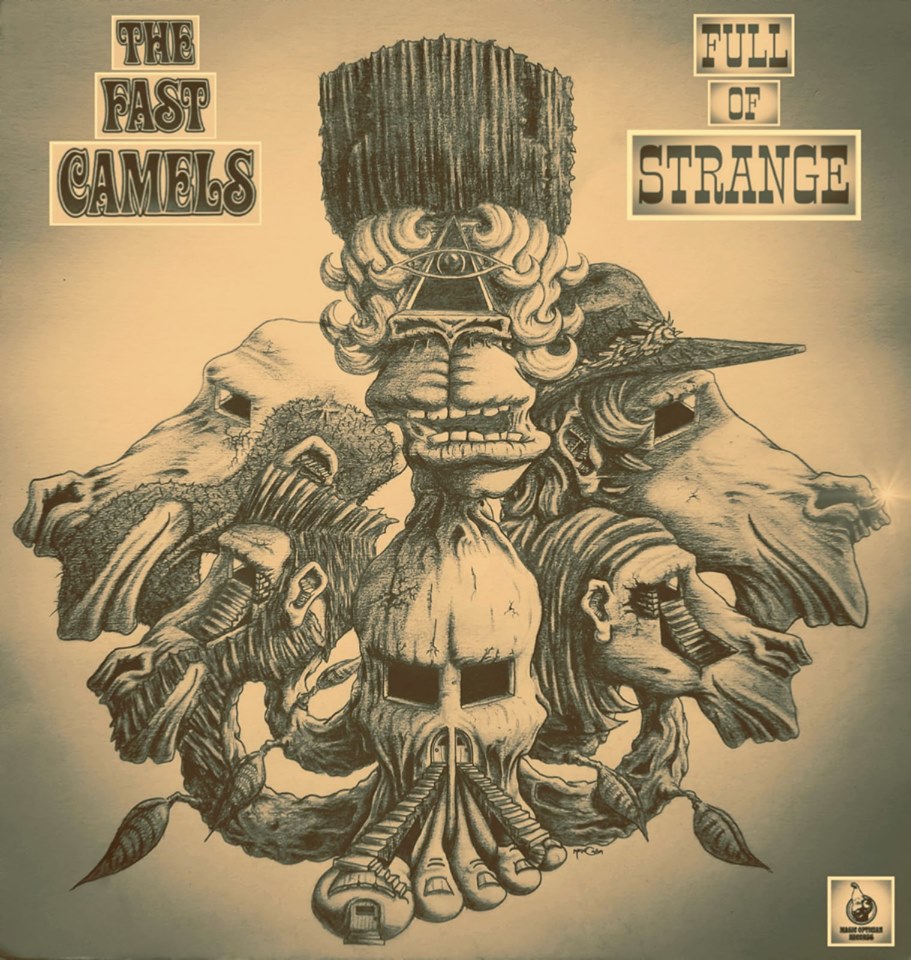 Because of several line-up changes, our 2nd release, Deadrooms & Butterfly Dreams was released 7 years later in 2014! Since then, we’ve been in a real good place with a solid base and the same 5 members. Mark (O’Connor) and I started the band and found an interesting connection through the love of music, humour and drive to create and write together. The Tales of the Expected album (2016) lead us on to successful tours of Mainland Europe and the USA before recording and releasing this LP, Full Of Strange.

“We tend to paint pictures in our heads”

I began writing songs years before ‘The Fast Camels’. My older brother was my main influence musically as he had a tremendous music taste and record collection fortunately for myself! He also taught me guitar and is a fine songwriter in his own right! So, before I met Mark, I did have a fair number of songs in the bank but I also found that collaborating opened up so many doors and has many more advantages. We tend to paint pictures in our heads lyrically for our own enjoyment whilst performing and there’s a real fun factor in our writing hence why we’re still at it!

What does the name “Fast Camels” refer to in the context of the band name?

Ha, that I’m not exactly sure? I know the reason why we’re called The Fast Camels but not sure you’d understand even with my explanation! Just think of Camels eating sand to save someone…

There are 3 main procedures in my eyes and all songs take different routes. Probably around 90% of them begin with Mark or I having an idea, meaning melody, chords, a riff or a lyric. Sometimes a bit of everything. We then jam the idea out in one of the houses, my on acoustic, Mark on electric and pen the song in a session to the point where we have a decent arrangement. The 3rd part of the procedure is the most satisfying when you enter the studio with the band and you hear it all come together! Everyone has pretty much a free reign to put their own parts and ideas down and we’re always open to suggestions. Mark and I write the majority of the songs but Joe and Andy both contribute also.

Can you share some further details how your latest album Full of Strange was recorded?

Yes, the album was recorded in 3 batches over a 2 year period in Glenwood Studios, Glasgow with Paul Gallagher, Producer of our previous 2 albums! We opted to record as much of it live as possible but kept in mind certain tracks which needed to be built up from acoustic guitar. Obviously, overdubs were used in every song but it was vital to keep that tight live feel for the final mix!

How would you compare it to previous albums?

Hand on heart, I believe this is the best and most consistent set of songs we have released collectively to date. There aren’t any filler in my eyes and ears on this record and I like to think I’m very honest and sometimes even harsh when it comes to judging our own music. Having said that, there’s a lot to be said for living with the album for a year or so before looking back and comparing from experience. Deadrooms, our 2nd album is of a high standard for me also but other members may prefer our debut! The last LP, Tales now looking back has a fantastic side one but is really lacking on the 2nd! It’s all opinions but I really rate Full Of Strange and I’m completely satisfied with its content!

On me, there are so many! Love and Arthur Lee are an obvious influence and it was dream-like to perform with their guitarist Johnny Echols (interview here) in the States! Was a mind-blowing experience not only covering songs of Love but our very own on stage with the man!

More recently, I’ve discovered the album Scott 4 (Scott Walker) which blew my mind and I’m still hugely into all the 60s scene bands from The Who, Kinks, Beatles, Stones, Byrds, Jefferson Airplane to artists such as Neil Young and Syd Barrett.

Yes, we like to play Glasgow at least once a year and like I say, travelling is a lot of fun with this current line-up, so we always find ourselves playing Liverpool, London and other locations in the UK. No doubt, plans will be in place for another trip abroad! We probably should play more festivals to boost popularity but we are very much an indoor band in my eyes. Those are the best gigs to attend anyway.

No, and never been interested to be honest. I love being a Fast Camel and they take up all my time!

We have already started writing the fifth Camels album which is pretty exciting. I went through a crazy writing spell between Tales of the Expected and Full of Strange leaving an over-hang to songs to finish, complete and arrange with Mark and I believe he’s in the same position. Hypnotic Bridge Records have asked us to write and record a 7″ single also which excites the life out of us, so we have a busy old 2020 ahead of us even out-with promoting the new album! 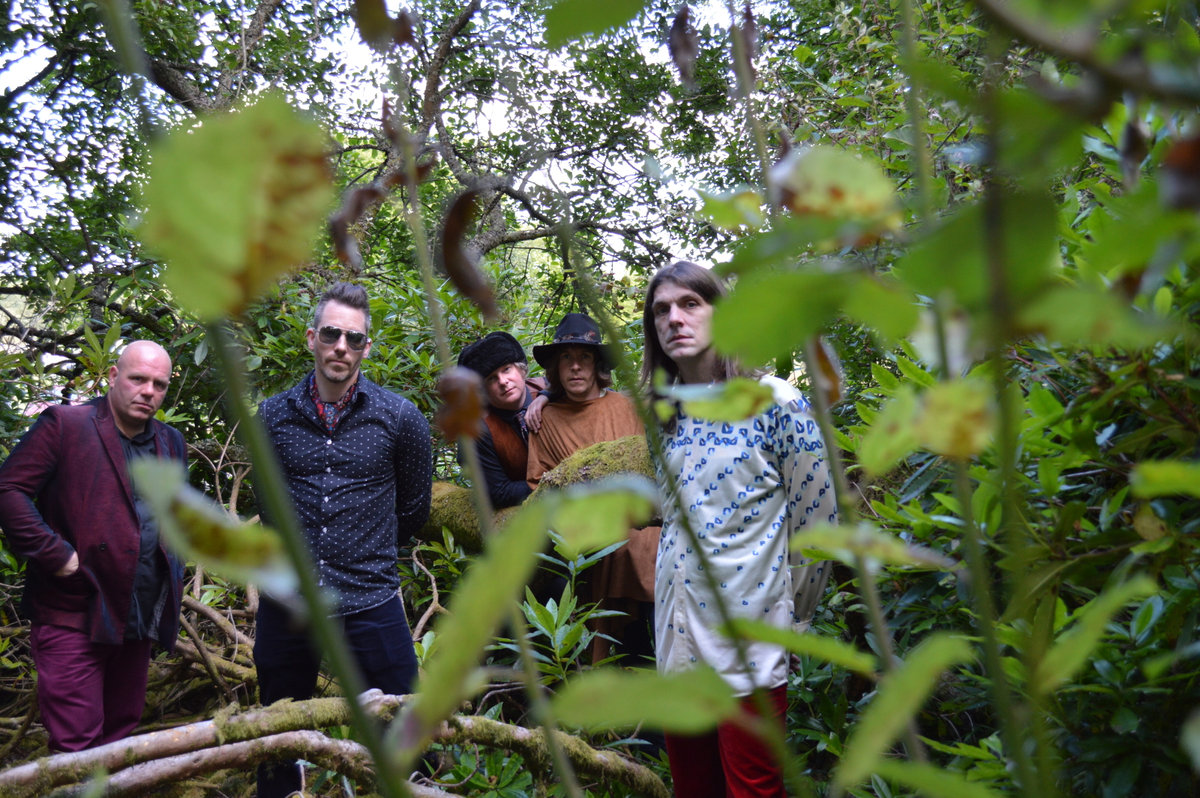 For something new, I would recommend, See You in the Next World – The Vapour Trails and watch out for fellow Glasgow band, ‘The Poachers’ who are currently recording their first album!

Thanks for your time Klemen. Absolute pleasure and I wish you a peaceful and cool 2020!