Paul Toohey, the man who went out shopping and came back 16 years later.

You recorded a 7″ for I Dichi Del Barone. Why are there 16 years between the last K-Group release from 2003 and this new 7″?

Paul Toohey: I don’t know. I could say family life, work, going to the shops. A lot of spare time got used up on house renovations, playing football, that sort of thing. But I kept recording all through that period, and I was trying out some new ways to make sounds and record with a computer. It was only moderately successfully and even when I made something I liked, I was in no hurry to release it, because I was out of touch with the music world. But I knew the time would come again so I never really went away. I definitely missed playing with Surface of the Earth. When I moved to Auckland Rosy Parlane and Torben Tilly encouraged me to resurrect K-Group for some live shows so the last two years have been quite productive. A few shows, lots of recording.

Can you tell me, in your own words, what am I listening to when I listen to this 7″?

Side A – processed guitar. The flip side came about after applying a computer effect to a sound that I can’t quite remember the source of. Possibly some synthesiser that has been pitch shifted and had its tempo dramatically altered.

Do you think the 7″ format fits your kind of drone music? Because one of the things I like about your drones is that they don’t go on forever.

When we had our label World Resources one of the ideas that appealed to me was making abstract, experimental music and presenting in a ‘pop’ format – the 7″. I’m still interested in that idea. Same thing with albums really, 8-10 tracks around a 4-6 minute mark. Trying to work with the format of music I grew up listening to in the late 70s and 80s. Sometimes it’s possible to do longer tracks but in general I prefer short ones. Live I think it can be a bit challenging for the audience because the music sometimes ends just when people seem to be drifting off with the sound and getting comfortable. 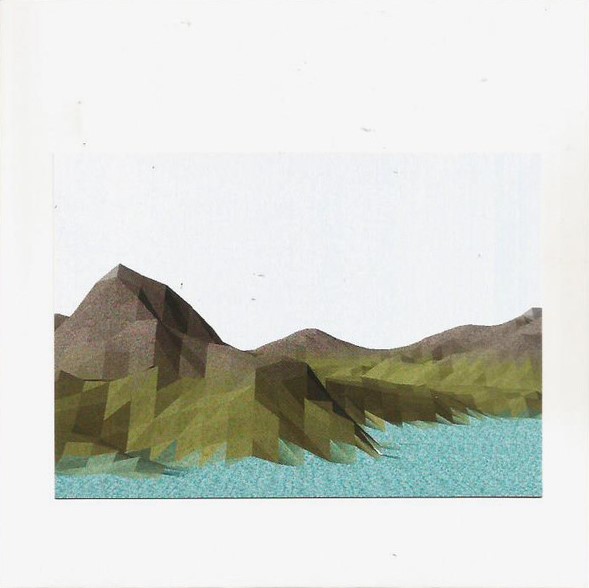 “Most of the stuff I really liked when I was kid had some kind of drone element.”

How did you get into this kind of music? Was it a record? Or an artist? Or an instrument?

Most of the stuff I really liked when I was kid had some kind of drone element. I was listening to the obvious stuff so guitar players like Bernard Sumner, Bruce Gilbert and Johnny Ramone made their mark on me when I was in high school, particularly the sound of their guitars and the economy of it all. I liked the synthesiser too and remember ‘Autobahn’ on the radio. I loved it, and of course much later discovered all the German music like La Düsseldorf. Back in the mid 80s I was making recordings with Tony from Surface of the Earth and also on my own. Some of the drone elements were already there, and largely because of my limitations as a guitar player. Some of the classic New Zealand Flying Nun 80s bands always had some kind of drone going on. I’m going to see Michael Rother in Berlin in three weeks in Berlin, I can hardly believe it.

What is it that attracts you in drone music?

I don’t think I can say I listen to a lot of drone music, but I like hearing people using drones in rock or pop music. Someone like Dean Wareham has been doing it for years and he’s very skillful and I already mentioned the German stars. I suppose the idea of getting lost in sound appeals to most people who love music. As for playing it, I think it’s all I can do really, as I am limited as a guitar player.

Which gear do you use, for making your music and for recording?

The K-Group CD on Corpus Hermeticum was a guitar album, recorded to cassettes, like Surface of the Earth. It took me ages. In the last few years I’ve been using the computer a lot, but not really in a high tech way. So now I generally I record guitar drones – using the overdrive pedal I’ve had since the 80s, a basic practice amp and a little reverb – onto a little handheld recorder. I transfer the sounds to computer and process them. I sometimes layer a couple of tracks, but because the recordings are quite low fidelity, there’s already a bit of texture and there’s a lot detail missing. This is generally a good thing, as it gives me something to work with. I don’t like too many layers – overdubs stress me – so I try to keep it as sparse as possible.

Did the music of Surface Of The Earth influence your solo work?

Well I play a similar role in K-Group to the one I have in Surface. I’ve really only got a couple of moves on the guitar so it’s difficult for me to come up with something different, but I still try. Some recent K-Group recordings are probably not drone music so I’m finally branching out a bit. One of the enjoyable things about Surface of the Earth is we don’t talk about anything, we just record. Because of the guitars of Donald and Tony, Surface recordings are more detailed. In K-Group I spend hours and hours over things and often end up nowhere anyway. K-Group is more ‘controlled’ and ‘constructed’ I suppose but it definitely contains less elements.

Why did you want to do K-group as a solo thing?

Mainly because I moved from Wellington in the mid 90s, and because I’ve always recorded on my own anyway.

What does the name K-Group refer to?

You tour Europe this autumn. Is this your first European tour?