Doom metal royalty, Acid King, recently finished up yet another US tour in celebration of the 20th anniversary of their classic album – Busse Woods. The band was then invited to join the Austin, Texas based Levitation Festival to headline the Riding Easy Records’ showcase at Barracuda in downtown Austin. Founding member, as well as guitarist and vocalist, Lori S. agreed to be interviewed before taking the stage on Saturday afternoon in front of an amped up crowd.

Hi Lori. Thanks so much for talking to me before the show.

Lori S: You are welcome.

Acid King has been playing music since the early ‘90s when doom music was all but unknown. What were those early days like for you and the band?

Lori S: Yeah, the only Doom that I knew of was British doom labels Rise Above and Peaceville. It didn’t really exist as a genre of music at least in the U.S.A. back then. So, there really wasn’t a community of bands. There wasn’t a group of bands to play with. When we started Sleep was around, Hawkwind were touring, Melvins, Neurosis, Buzz Oven, Eyehategod were regulars in town. We played with some of those bands in the early ‘90s.

This was before “Stoner Rock” was born.

Would they have just called you “metal” back then?

Lori S: Yeah, metal or psychedelic. I honestly don’t even remember having a genre name. This was before “Stoner Rock” was born.

People weren’t as over the top with genres and sub-genres and trying to put a sticker on everything?

Lori S: For sure there are a lot more now. I mean, there was grunge back then but not much else! And then everybody kind of got lumped into that and that sub-genre. But yeah, there definitely wasn’t stoner rock, stoner metal, heavy-psych-stoner and all the other millions of names that are now honing in on whoever made up these names to specifically label you according to themselves!

Are you from San Francisco originally?

When did you move out West?

When did you notice that doom, or rather not calling it doom but this style of music, was beginning to get popular and musicians starting to form communities around this?

Lori S: Man’s Ruin was kind of like the first label that would get these orphan bands that didn’t fit in the generic metal label and started putting them together. And that was the first time I think I felt a little community. And then from there, we had Small Stone Records which honed in this specific genre. Which kind of started again going another step further and having the label consist of those kind of like-minded bands and I think that’s when somebody started the stonerrock.com website and honestly, I don’t even know where the term “stoner rock” came from – I thought it came from someone in Italy. It became a thing whoever made it up. Once there was stonerrock.com that is this online web forum, it became more popular. It was like a place where everybody that started liking this kind of music went and shared info on bands in their towns. Once the internet was around and before Spotify and social media, you could go on the forum and say “Oh, if you like Sleep, you’ll like this.” So, I think that was a place where a lot of people congregated on the internet to swap stories about music and life. For me, that’s where it kind of started to get popular.

Sure. I can see the internet playing a major role in that. Before then you’d have to be in a certain location or know the right people or whatever.

Lori S: Well, yeah. Everything was harder to find because you’d have to get a magazine, you have to read about it, you’d have to see what the interviewer or reviewer said about the record, then you’d have to go to a record store and buy it, then you’d have to ask the record store person, “hey, you know who sounds like this that you could recommend?” It was a way bigger process and obviously took longer. So, definitely, social media plays a huge role in the expansion of this kind of music because it’s so much easier to find like-minded bands now. It’s in your face. You’re not shopping for it anymore in the same way.

These kids got it too easy these days! On that note, there is a lot of young fans out there that weren’t even born when the first half of your discography were released – 16/17 year old kids. (Right Miles?) What do you think draws these younger fans to your music and to the genre in general?

Lori S: That’s interesting. I don’t know. I wish I had an answer for that but I really don’t know. There’s not a lot of younger fans at our shows because most of our shows are 21 and up, unfortunately. I barely get to hang out with younger fans but it’s always really cool when I do. When there is one and I am so happy to talk to them, I actually never really thought to ask them what it is about our music but I will next time!

You recently finished the Busse Woods 20th anniversary tour – how did it go?

Lori S: It was good! It was something I wanted to do just to celebrate the amount of years that record has been out and it was three weeks across the US and it was a really challenging tour with long drives and only 2 days off in 23 days! Glamorous life in showbiz! 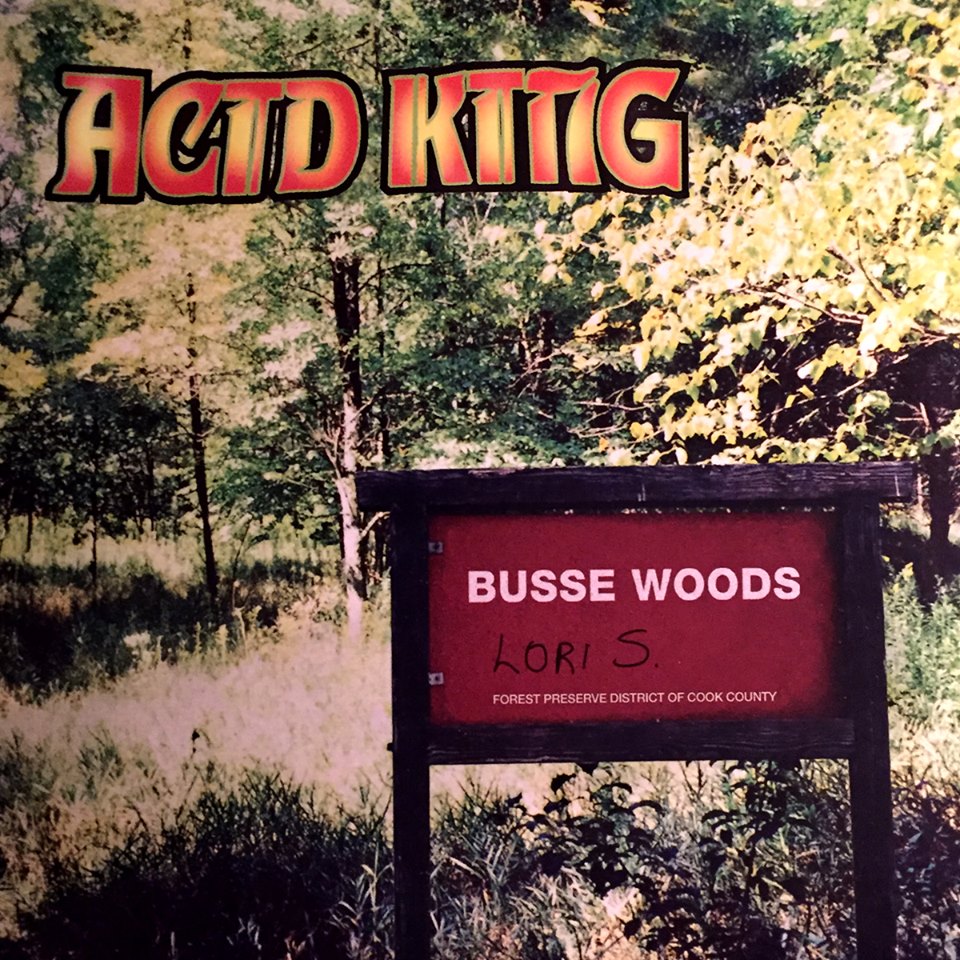 Lori S: It was fun getting to know the other bands. Warish was traveling in a rental RV. After our Dallas, show we had the next day off so we decided to go out after the show. All 3 bands: Acid King, Wizard Rile, and Warish piled into the RV and went to some random local bar on Monday night. 10 people walk in out of nowhere. It was pretty funny. Riley Hawk (interview here) from Warish was a big fan of one of our songs, “Blaze in/Out”, so I taught him “Blaze Out” and we played it together in Arizona and LA.

Were you able to catch some shows here at Levitation last night?

Lori S: I went to Mohawk last night and saw Kikagaku Moyo from Japan. Then I went to a goth stage to see David J of Bauhaus play but only saw the opening bands. It definitely had a late 1980s vibe to it.

I don’t see any future tour dates on your website – does that mean you get to go home after this weekend?

What do you like to do when you’re not writing or playing music?

Lori S: I have a career in Video Production and I also teach group fitness classes but the band keeps me busy even when we’re not playing. I’m the manager, the webmaster, I run the online store, and the social media poster!

Well, it seems like we are being blown out of here right now! Any last words for our readers?

Excellent! Thank you again – looking forward to your set!