Humming Dogs use the framework of a rock group to structure improvisations. Les Borigènes is their first album on the always great Bison label.

“Naivety is a way of being”

Where, when and why did you start Humming Dogs?

I’ve worked alongside the actors from the Oiseau Mouche company since 2010. Over the years I organised several workshops, which resulted in various collective performances. After a concert by Harry’s in 2015 at the Malterie in Lille, organized by Muzzix (a collective that I’m part of), Stéphane Frimas, the director of the Oiseau Mouche company, asked me to organize a concert-performance. The idea was to work with six actors from the company over four days of creation, and then have a concert at the end. The work was based on improvisation within the framework of a “rock” group, and ended up on stage in March 2016, also at the Malterie. Franq De Quengo, the director of Sonic Protest, liked the concert and offered to book the group for the next edition of the festival in March 2017. We had a year to prepare for this momentous date. We organised new workshops in order to meet the company’s newly arrived actors. The other point of these workshops was also to replace the two people who didn’t want to continue the experiment. That was how Florian Spiri and Mathieu Breuvart joined the project. The commission was for a 40 minute concert so I recentered the project on the format of a rock group, and Mathieu in particular developed a real talent for drumming. New songs like “Ha Ha Ha” emerged from these rehearsals. So thanks to this fabulous concert at Sonic Protest, the Humming Dogs became a real group.

What inspired you to start Humming Dogs?

It’s a vast blend of diverse influences and improvisation practices.

Humming Dogs remind me of Flaming Dragons Of Middle Earth, or free folk music from Finland or the US from 15 years ago.

I’ve been feeding on experimental music discoveries for the past 30 years: Fred Frith, Franck Zappa, Karlheinz Stockhausen, The Residents, Sonic Youth, Jimi Hendrix, John Coltrane, John Cage, Pierre Henry, Tom Waits, Marc Ribot, Jim O’Rourke and many others, the list is long. But I didn’t have any preconceived vision aside from mixing all kinds of instruments and improvisational approaches. A desire to find modes of playing in which even non-musicians could find some satisfaction from making sounds and listening to them together.

Where does the band name Humming Dogs come from?

We needed a name for the concert. We were trying to think of something in English… Oiseau Mouche in English is humming bird, and my name is Bausseron which is pronounced like Beauceron, which is a breed of dog, so by crossing Oiseau Mouche and Beausseron, which sounds like the name of a dog, we came up with Humming Dogs.

How do you remember the recording of Les Borigènes?

We recorded it in February 2019 in the cellar of the Oiseau Mouche theatre, which is a place I like for the atmosphere produces. We had five days to set up the group and record it all live, in a very friendly, joyful and creative atmosphere. We were able to experiment with different acoustic sound materials in addition to the planned songs, and we kept some excerpts of this on the record. We also came up with new songs during the recording, like “Le Mariage” for example. The conditions were not ideal with the monitors and we couldn’t hear every sound that was being made. Listening back revealed some nice surprises!

Is this improvised music?

Both… improvisation remains the main thing. The songs are born from improvisations and I extract a framework so that we can play them again. For example “Ha Ha Ha” has a defined structure, “Un Payasage” is driven by Chantal’s zouk drumming. But what happens within the songs remains improvised, with a defined role for each person. The lyrics evolve with progressive versions of the song. In one case, I discovered that Floriant had come up with new story, which gave the song a new title (before it was called “T’es où?”) The words to “Les Passants” are improvised every time by Valérie: he always talks about the journeys undertaken by the Passants, but his imagination takes it in different directions. For each track everyone has a specific instrument that changes with each song. Some people keep the same instrument for several songs. Some tracks were born from a riff proposed by Mathieu on drums or keyboard, like his themes from carnival music. “The Wedding” was born like that, he came up with an unusual rhythm and I asked him to play it again, everyone took the instrument they wanted, and we defined a few modes of play. Chantal and Florence took the microphone and it was done in a single take. Thierry is very creative and proposes a lot vocal ideas that we mix together and use to solidify the structure of songs like “Ca m’énerve”, “Ma tête à New York” or “Twin Peaks Waraka”. 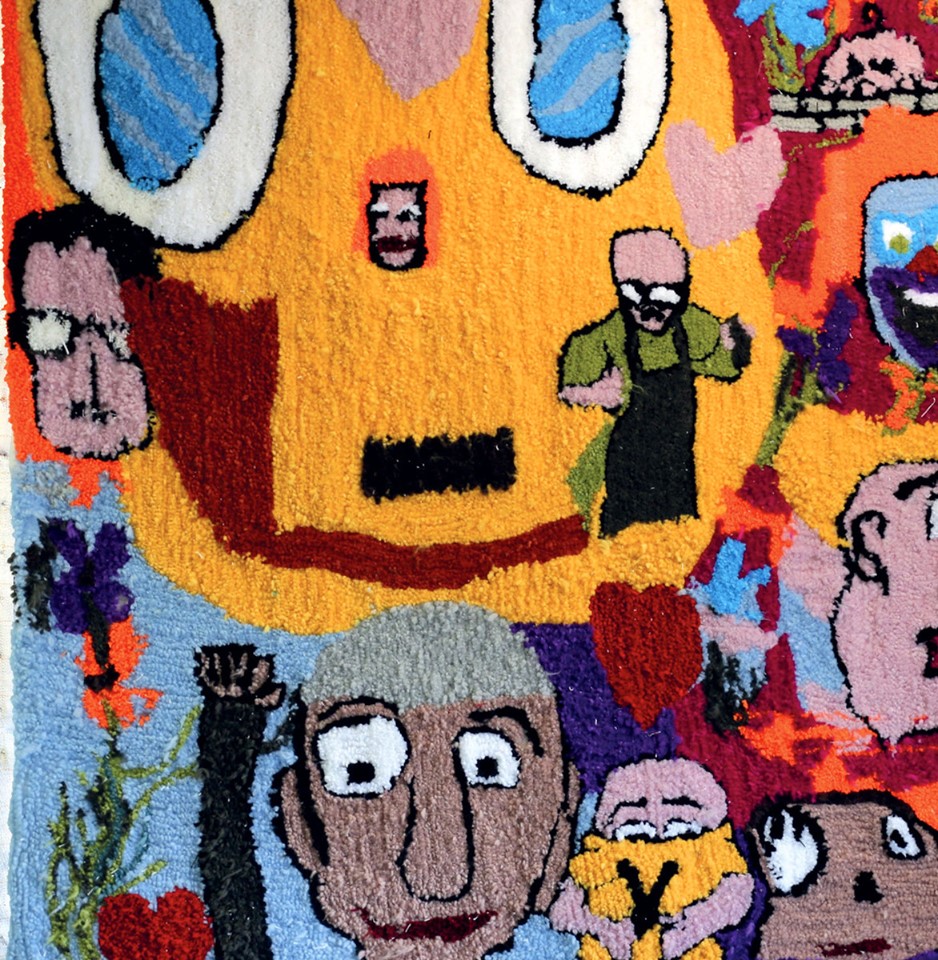 Does humor play a role in Humming Dogs? Does humor belong in music?

Yes, because humor plays a role in the meaning of life!

There’s something naive about the music of Humming Dogs. Can one decide to be naive, you think?

You can decide to be humble and attentive. For us naivety is a way of being, not some artifice or posturing.

How did a French band end up on a British label?

Playing at the Sonic Protest Festival gave us a certain visibility. So Alasdair Campbel from Counterflows Festival contacted us to book the group. We were looking for another date in Great Britain. Naturally we came in contact with Cafe Oto, and Abby Thomas was very interested in our music and proposed to make a disk. Everything happened naturally without any premeditation. We were really lucky!