El Gran Temor (“The Great Fear”) celebrates its 15th birthday this year, but despite being active for such a long time, this Chilean band has only two full-length albums in its discography. Their second album Lágrimas De Acido was released in June 2019. There are nine years between new album and the debut Jugando Con La Muerte, but El Gran Temor keeps same fresh vivid spirit of psychedelic stoner doom metal.

Hi Jorge! How are you? What’s going on in El Gran Temor camp?

Hi Aleksey I’m fine thank you for this interview.

I guess we didn’t talk for about nine years or so, and I see the band was split for two years since 2011 to 2013. What did happen back then?

Yeah, we spoke 9 years ago, and to be specific we have 3 years with no activity at all. What happened? Well I suppose “life broke through” and things changed for the members of that line up. Francesca went to live in another city with her new family and Christian, the drummer left the band to play with Los Peores de Chile, so I was left alone with my project.

And what did make you to return El Gran Temor back to life?

It never really died. I was searching for the right musicians to continue. Sadly I didn’t find anyone here in Santiago. I met an old friend Fernando Cares who has played with me in the 90’s when we were learning to play in my hometown of Temuco. We always has been kinda waiting for the time to play together again, he liked the first record a lot and told me that he would love to play with me. Then one thing leads to the other and Francesca Pennacchiotti (bass player) called asking for a jam. We got back together.

Jorge, there are nine years between Jugando Con La Muerte and new album Lágrimas De Ácido. How long did you work on these songs?

As a matter of fact, we are not in the same city, so we jam when I can travel south… We started in October 2013 trying to recreate the vibe of the old band and started to compose and arrange, then in May 2016 we did a recording, a preproduction demo of 5 songs, 4 ended on the album, after that we ended the composition of another 4 songs and we went to Estudio Lautaro to make the real recording, mixing and mastering.
But we didn’t release it until 2019 because of instrument robbery that we suffered in January 2018, so it took a while to recover from that. However, it can be done in 2 or 3 years I think (in a perfect world.) So took your 9 years – 3 years hiatus – 3 years of bullshit = 3 years to make it.

You have to obtain good motivation to continue keeping the band active in these circumstances. What does drive you to keep El Gran Temor move further?

I love to play this music and it’s all I want to do. I also enjoy doing everything that involves, design, artwork, write lyrics, producing, mixing, every step keeps me motivated. I don’t need extra motivation.

Speaking about technical side: in which conditions did you record it? Did you work in a same studio as with Jugando Con La Muerte?

We went to Estudio Lautaro and worked with Pablo Giadash who is a record producer and guitar player on ‘The Ganjas’ and other projects. He had made a lot of great records with bands of other styles so we try to experiment a little bit with the dynamics this time, so we needed to sound a little bit more organic, more analog, more sixties rock if you will… We used vintage gear. Everything that you need, mics, hardware (mixing board, preamps, equalizers, compressors), tube amps, Ludwig drums, etc.
They have a very good room with lots of space and that gives you natural reverb so we didn’t have to use post production effects, just an old Roland Space Echo, you know that Tape Delay is amazing… We did it live just like the first time. All the music in one day and the next day the vocals. Two more days for mixing and mastering, and we did a remastering after that so… 5 days of work.

Oh, it should be expensive to record in such well-equipped studio!

Yeah it is, and we are low budget as always ha ha ha… but it’s also a challenge to do it like Black Sabbath did… maybe if I had more budget I will do a double album but in the same kind of approach because I don’t like to tweak stuff like the other guys do today. I prefer to do it live, one take and after the vocals and that’s all, then mix and master, this record has no overdubs it’s all live recording like The Beatles or Hendrix did.

How would you value the band’s progress on new album?

We progressed a lot as musicians, for example Francesca now has a different role. The bass is featured on the songs as a separate element that gives me more space to do different things with the guitar, the vocals, Fernando is a great drummer he can do improvisation sometimes it makes the shows more interesting and arrangement is more easy.
We change things like the tuning for example now is E standard or drop D. That makes me sing better than before and I can use other instruments more easy like keyboards. We did a song with mellotron and it’s called ‘2019’. I think that is the most far we got in this record.

How would you sum up your personal musical influences?

As Always Black Sabbath, Pescado Rabioso, Jimi Hendrix Experience, Led Zeppelin, Deep Purple, Feetwood Mac, The Beatles, this time maybe a little more of prog rock of the 70s I have been listening bands like this the last 9 or 10 years… Curved Air, Osanna, Yes, King Crimson.

As I understand Lágrimas De Ácido is only digital release. Any interest from labels?

We recently get signed by Interestellar Smoke Records from Poland, to do limited editions of our material on CD and vinyl. For now Lágrimas De Ácido on CD ecopack is ready to order; there are 300 pieces.
So yeah we are on all digital streaming services like Spotify, Apple Music, Google Music, Tidal, Deezeer, Shazam, Youtube Music and Bandcamp… 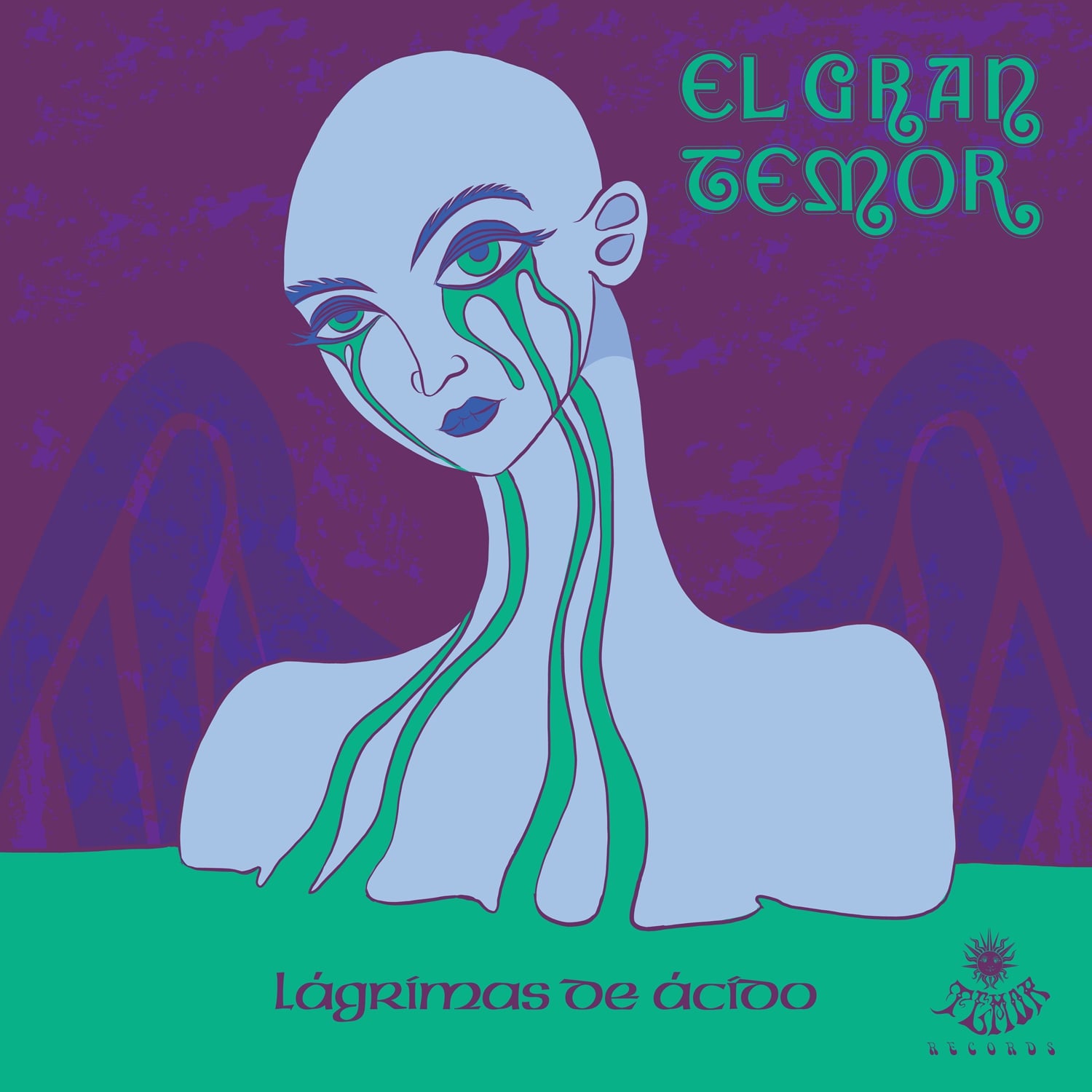 How often does the band play live nowadays? How is the situation with gigs organization and venues?

We performed 21 live shows in this second round of the band in different cities of Chile: Santiago, Curicó, Concepción, Temuco, Pucón, Punta Arenas, Copiapo and we play at festivals like Merken Rock 2014 y Woodstaco 2015 and 2017.
Now there are more rock festivals, production companies. I think it’s way better than it was. The crowd changed too. Now is a new generation of kids going to the shows, it’s crazy how it grew, but we still do little shows in bars.

Did you have an opportunity to play in other countries?

There are some conversations with producers from Argentina and Mexico. I hope we can do some shows next year.

From the first glance new songs keep same energetic and refreshing vibe as songs from your debut. What kind of feelings did you put into it?

Well we love what we do, you know… I think it’s passion for what we do, and yeah we play songs live first and then we do the recording. That way we tested the reaction from the audience.

Your lyrics are Spanish as usual, may I ask you to comment songs’ texts?

‘Lágrimas de Ácido’ is a song about betrayal, but it has a psychedelic element that reminds on my own real life experience with mind expanding chemicals.
‘La Vida es un Viaje’ is a song about a man that hits rock bottom. He doesn’t have another option and is wandering around the land. I think it is better to go away.
‘La Iglesia que Dios Abandonó’ is about the Catholic Church and how it is falling apart. It’s a little bit sarcastic.
‘Advertencia del Destino’ gives you a little bit of advice, some philosophical themes, a little bit of Arthur Schoppenhauer, Emile M. Cioran… those pessimist.
‘2019’ is nostalgic tune that reminds me of lost love, but I set it in the same year as Blade Runner, maybe we will do a re-recording of this tune in the future with other sounds.
‘Viaje Místico’, this is the rocker of the album, it’s an old lost song, it tells the journey of a kid who left home and went searching for destiny but ends in dissolution… I don’t know why, maybe it is a prophecy.

You’ve mentioned mind expanding chemicals, is that a problem in Chile?

No it’s not a problem. I think everybody needs to expand their mind.

Do you still see the band as a sort of a tribute to hard rock music which could exist in 70s Chile, but was choked by Pinochet’s regime?

Yeah I think we still have that mission, because here no other band is doing this kind of crazy shit. We want to create our own blend of rock & roll like the bands from the 60s or the 70s did, with our own personality, expressions, combining all the styles of music we have listened over the years, and some people get it, I think.
We are not thinking about Pinochet, we are reflecting on things that affect the reality that surround us now. So yeah, maybe it’s not a tribute but it has elements of those bands that are lost in time.

I recently saw a movie trailer. It was Trauma by Lucio Rojas, a very ugly, violent and bloody film exploring and exploiting consequences of Pinochet’s crimes. I didn’t watch the movie itself, because after watching this short trailer I already wanted to take a shower. In his interview, Lucio said that he wanted to show all this violence to remind people of that terrible period of Chilean history and to get rid of torturing feelings he bear inside. What’s people attitude to that period nowadays?

It was a very violent regime that include genocide. The name of the movie really fits the regime. It’s really great that films like this are being released, but there’s almost no publicity. The last one that got a bit more publicity is Colonia, but that was because of the actress Emma Watson. New generations just want to forget about the past, but I don’t think that’s a good thing, because there are lot’s of new right wing politics happening around the world and they want to do it “the democratic way”, but the final goal is the same.