Italian The Ossuary consists of three members of old and honest local death metal band Natro. Max Marzocca (drums), Domenico Mele (guitars) and Dario “Captain” De Falco (bass) formed it in 2014 with the help of Stefano “Stiv” Fiore (vocals) from prog / power metal band Twilight Gate. The Ossuary recorded absolutely killer debut ‘Post Mortem Blues’ in 2017 – it was energetic blend of traditional doom and classic rock, and it rocks! Two years after they return with new full-length ‘Southern Funeral’ which serves as development of the debut. Together with Max Marzocca we try to find roots of the band’s addiction to Italian burial rites.

Hi Max! How are you? What’s going on in The Ossuary camp?

Hey Aleksey, I’m good, thanks! We’ve been touring Italy after ‘Southern Funeral’ release during the spring and in July we’ll return to Rome to play this stoner doom festival with American legends Coven, Demon Head, Misantropus and a few more, and one more gig 100 km away from home. Last May we released a video clip for the title track and we’re working on a new one for “Walk Into Sepuchral Haze” to be hopefully out in September, so keep your eyes open on YouTube! We’re also writing a bunch of new songs, so yes the band is pretty active these days!

The band’s second full-length ‘Southern Funeral’ was released in January 2019, do you already have your portion of praise for this work? It seems that you didn’t lose moment and keep on moving after ‘Post Mortem Blues’ release without stop. Do you feel that charge still?

Common opinions on this album are very good so far, so we’re happy with it! After the first album was recorded and mixed – apart from playing some shows here and there- there was not too much to do until it was released. We immediately started to work on new ideas so by the time ‘Post Mortem Blues’ was out we had already 5 or 6 songs for the new album. I think there’s nothing better than using dead times at your advantage and when inspiration is there you have to catch it! 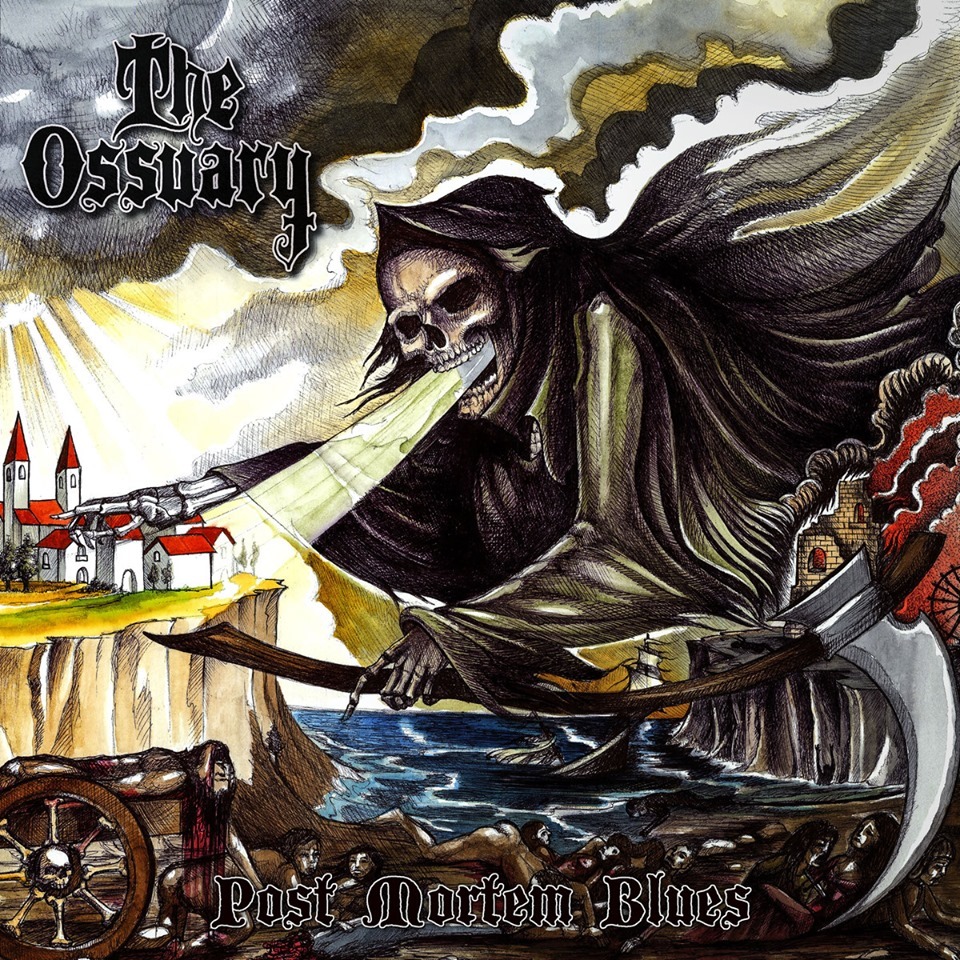 What do you put in the album’s title? Is it about some general aesthetic of Italian vision of death or is it rather a reference to southern rock?

It’s both. Basically we want to pay tribute to our homeland and our dark folklore talking about a typical funeral in the South of Italy, how people from here are living the cult of death. It’s also a kind of metaphor on how our land used to be rich and glorious in tradition and values while it’s decaying and lost now. It perfectly depicts how we see Southern Italy these days. ‘Southern Funeral’ has the same meaning as the debut album, it reminds about our music and where we come from. Like in ‘Post Mortem Blues’ there’s the word ‘blues’ that you can link to ‘Southern’ and the word ‘funeral’ to ‘post mortem’. It means that Death and doom is what we talk about and blues is the background of our music and culture, we’re a band from the south and there’s a lot of sadness that we talk about.

If I’ve got you right, The Ossuary had a short tour in order to support ‘Southern Funeral’ release. Can you tell about it?

Yes, it was just a few gigs here in Italy. We basically played the Middle and the South, Rome, Pescara and a bunch of gigs in Puglia, Sicilia and Calabria. We look forward to play more gigs in the North of Italy after summer, and hopefully touring Europe again like we did last year to promote ‘Post Mortem Blues’.

How much time did you spend in the studio recording ‘Southern Funeral’? Is it fun still or rather a job as you’re all high-qualified musicians?

We spent 9 days just for the recording and several days for mixing while mastering took only a few hours. This time around sound engineer wasn’t happy with the first mixing and we actually had the same opinion and eventually it took a while to re-do the mix ad then check the last details. It’s always fun to record an album but we take it seriously as it’s important to record your music properly, it’s something that is going to stay there forever. 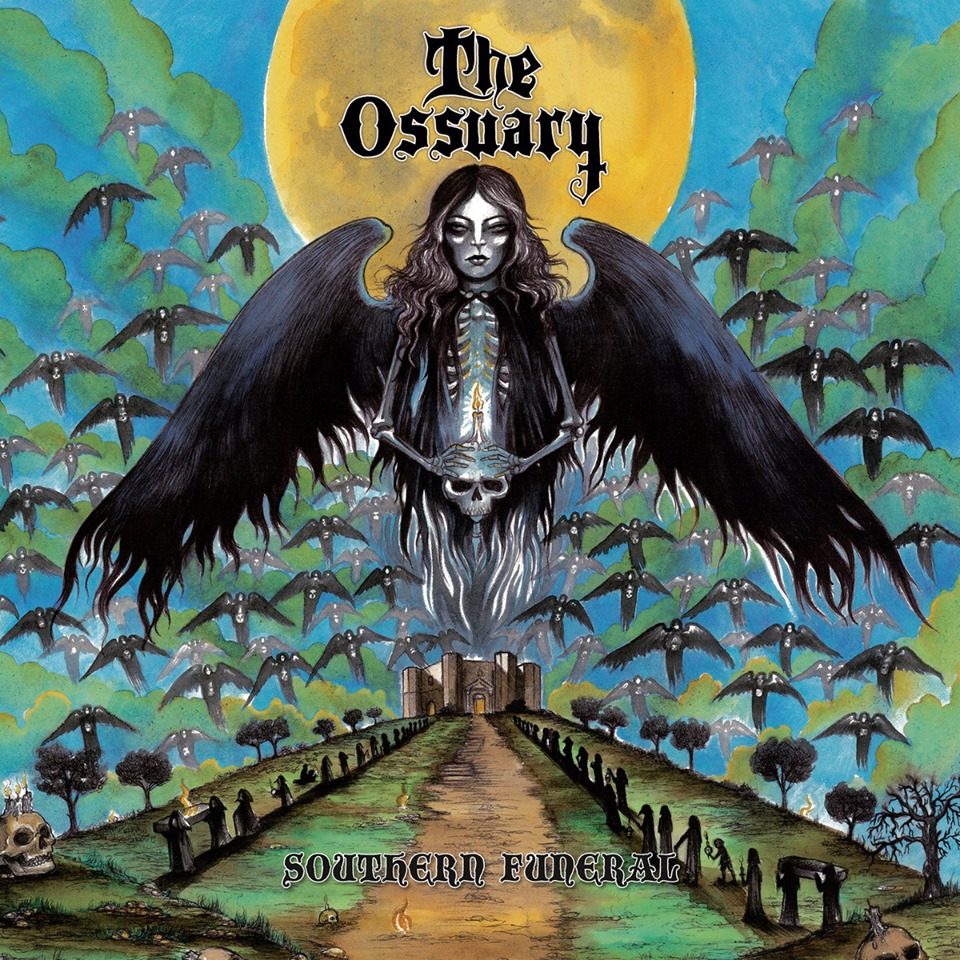 Did you want to try something new this time during recording studio? Did you have a plan to upgrade The Ossuary’s sound?

With this record we introduced some keyboards and synths and more effects on bass and guitars, I also recorded a cowbell…we’re slowly expanding our sound and trying to get close to what we really want the band to sound like. But we’re very careful with it, unless we’re 100% sure we don’t do experiments or improvise during the recording. If there’s a Hammond or a church organ there it is just because we feel like it really fits in that particular song.

How would you resume The Ossuary’s live activity? Is it easy to organize gigs outside Italy for you? Do you survive in tours or do you have time to enjoy these trips? And do gigs abroad pay off?

Well, we’re very underground so it’s hard to say if it’s really payin’ off what we do! For sure it’s great to travel around and get our music to as many people as possible and definitely it’s the best way to promote our band. People are coming to our gigs, they see the band on stage, they like our show and buy t-shirts or records, that’s’ all we need! To be honest it’s not that easy for a small band like us to book tours but actually we did toured over Europe in 2018 and we’re currently playin’ gigs and some festivals. When it happens we enjoy life on the road, I mean that we’ve been doing this for 25 years with our previous band therefore we are well trained (laughs)!

Max, as three of The Ossuary are still in Natron, can you tell what’s the band’s status? Does The Ossuary demand all your time and energy nowadays?

The Ossuary is the main and only project at least for me. I don’t have time for any other band which sees me as the first in line for managing, booking, writing music etc..etc… Don’t get me wrong, I’m proud of everything I did with Natron in 25 years: records, tours, festivals, on a smaller scale we wrote a cool page of the international underground death metal scene but now I’m happy with this new band. It’s only 4 years since The Ossuary is around but I want to continue with this new project and it needs all my energy! That’s the reason why Natron is in frozen mode since like 2 years and a half, and I have no interest in reviving the band now!

By the way, Natron had 25th anniversary in 2018, did you celebrate this date some way?

Natron 25th anniversary was in 2017 to be precise, that’s when we played the last 2 gigs in Rome and Naples and then we quit. The curious thing is that the first and the last gigs ever of the band were both in Naples. Kinda everything ended from where all got started!

Do you feel difference of being part of death metal and doom metal scene? How does it differ consider gigs, fans, medias and so on?

In the death metal scene today everything seems to be reduced to a mere challenge of speed, brutality, 300 bpm blastbeats, guitar shredding and clean vocals….clean vocals, dude! Can you believe it? You go to a death metal show and you will see the crowd is composed by 50 nerds who play in a death metal band themselves, and the impression you get from the stage is that they came only to see if you ‘re doing a proper job. You are under the microscope lens, no one’s buyin’ merch, no one gives a shit, the death metal underground is boring as fuck! I’m sorry but this is not for me! Death metal was supposed to be the sound of the evil and the cemeteries like Obituary, Autopsy, Cannibal Corpse, Carcass, Morbid Angel, Deicide or Suffocation. There will not be again a band with a gore-drenched HM 2 Boss distortion pedal, pounding drum blastbeats and skunk beats, and gut wrenching singers like John Tardy, or LG Petrov, or Matt Karki growling death leaking lyrics. There might be a generation of new bands in the same wake of those classics but still they will sound fake. And getting 30 people per show! The difference is that doom metal is more hyped and popular today and everyone wants to be part of it. It looks a bit like the death metal scene of 25-30 years ago but with less enthusiasm and with the internet bullshit. Someone would say it’s a bit trendy and for some reasons it is but I see that there’s a better quality regarding the music itself. Actually there is a bunch of very good new heavy/stoner/doom bands. Some of these bands are not just revival and they’re trying to make their own thing.