Fountain Fire is Bill MacKay’s second solo album on Drag City. The Chicago-based guitarist’s continued sonic journeys in conversation with himself follow a travel-worn map written in his own hand. Bill has followed the trail from familiar confines to unknown places, catalyzing a style equally enamored with the traditional and the avant-garde to make his most expansive and forceful music to date.

Thanks for taking the time to sit down with me. Are you excited about the new album?

Oh it’s a pleasure. I really am excited for it. It feels like an extension of Esker, my previous solo record, and a departure as well. The instrumentation has been expanded, now including vocal work, more keys, and even more guitars. The arrangements are more involved as well, and it’s both grittier and more orchestral in places than the prior records. Most importantly though is the drama, color or cinematic aspect of the songs. And all of that came together in a way that feels deep and right to me.

Are you a classically trained musician? Do you come from a musical family?

Only briefly did I study classical guitar, and jazz as well. But in each case my teachers were true models of excellence, and I took away a lot of from the short time of study. From the classical work, I was really taken with the idea how you could move a bass line and melody line at the same time.

This is something I use a lot when playing solo, but it comes in handy most any time.
You can create a lot of color this way, and it tends to draw out your own qualities, rather than become a technique that seems borrowed. I’m still working with it and discovering its secrets.

“Expression was the thing.”

My family was pretty musical, yeah. My dad played trumpet, and the whole family was into records and sounds of all kinds. There was a lot of Broadway music, jazz, classical and I got into rock, blues and punk and things on my own. It was a heady brew as they say. And anything I liked had a similar weight, so genre differences were never a big thing to me. I didn’t make a distinction between so-called instrumental and vocal music. And I still don’t. Expression was the thing.

I started to write my own songs at a very young age, pretty much right after picking up guitar when I was 9. I wish I remembered some of that stuff! I used to play at parties the older kids had when I was like 11, jamming away whatever songs I knew on electric guitar. It was the precursor to now. There was one song called “The Thing” I had that had like 17 different parts I’d stitched together. Not sure why I never recorded it.

“It was great to experiment with pushing the amps to very high volumes, and seeing what sorts of new sounds unfolded.”

Would love to discuss your latest album on Drag City Records – Fountain Fire.

Well, Fountain Fire was in the works for a while, and a lot of songs came and went as I zeroed in on what I my vision of it was. I was definitely looking to expand – as I mentioned – on the previous records in terms of going further with the arrangements, and looking to make a rawer-sounding record. And I think that happened. It was great to experiment with pushing the amps to very high volumes, and seeing what sorts of new sounds unfolded. Theme-wise, I have intense feelings about the urgency of the times we’re in, and responding in a visceral way to them. In both of the vocal songs, the lyrics treat some of this heaviness and brightness. I think it’s overall a warm record while it also has rather haunting qualities to it.

The soundscape is one that I wanted to color so that it would be pictorial in a way to the listener. There are improvised sections, but the majority of the songs were composed prior to recording. A few were partially written on the fly.

[As a side-note, and contrary to what is often said, I’m not and have never been a finger-picker as guitarist. I always play with a single flat-pick. While I do pluck strings with the other fingers, my sound is a result of flat-picking using the other fingers in conjunction with that. I mention this just to clarify what is being heard.]

“Dragon Country” is the longest track on the album, and I’m really delighted with the variety of sound and mood on it. I play slide on about half the album, always glass, and I aim to get into new territory with the slide. It’s easy to fall into established modes with it. 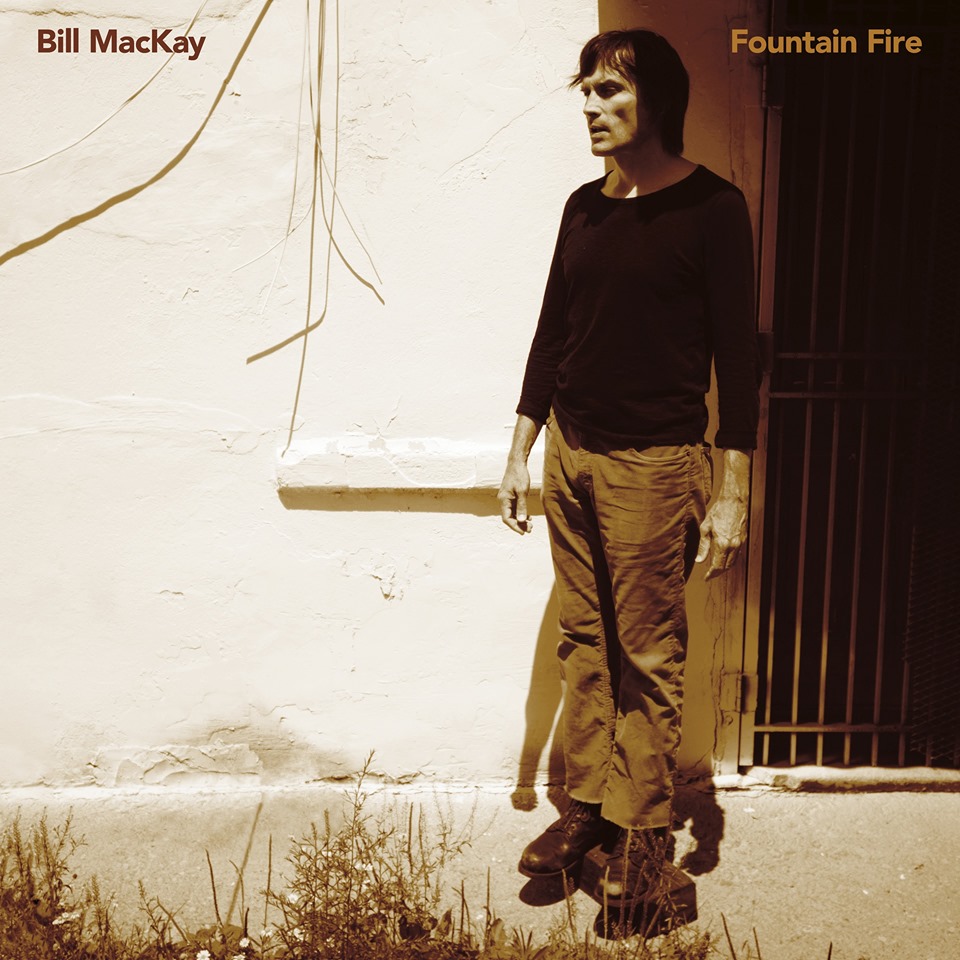 The record feels like a complete statement to me, like it all hangs together as one. Melody is always a big thing with me, yet with Fountain Fire, that was coupled with lyric songs, and arrangements overall that stretched into areas that were to me exciting and unruly. There’s a freedom and journey in it.

Yes, I definitely do. It’s exciting to stretch a song in the moment, and then see that you’ve added that part to the song as a new section or vibe whatever it may be. It’s good in that way to play your material a lot before recording it, but it just doesn’t always work that way! I enjoy both recording and performing, and I see them as quite different so they’re hard to compare. It is important to me to get as much of the energetic feeling you reach for live into the recordings, but those situations are still completely their own.

Well, it has changed in a way over time, but then it is much the same: I usually work with varied fragments of lyrics or melody or chord changes I find entrancing, and songs assemble themselves from those pieces. When extra lucky, a song tumbles forth and is basically done, or close to it, without much re-working. It’s really another form of meditation. You allow things to percolate, allow bits of yourself to become visible, penetrate the layers of the past or of any time. It’s just like painting. It can be daunting to shape something that has value but isn’t quite right. But I’m always glad when the song emerges and is more powerful for having cared about it – and pushed it to reveal itself.

I think about doing some of them, and I’ve reworked a few before. I think I’d be most open to it if the song was at some distance from me in time. There are definitely songs that benefit from life’s experiences. Sometimes an idea to alter an arrangement hits me like lightning, and I realize it could be so much better. And there are changes to what a song means to me, as time unravels. It can take years to really see a song’s true potential. So yea, I’ll likely do more of that. It’d be cool to redo some of the Darts & Arrow’s songs that I wrote for that band.

Mostly more of what the present plans are! I’m writing songs and working on a book. I have a few record ideas boiling, and I am doing a variety of tours through summer and fall this year. So, I’m trying to not think forward too far. If you stay present, and keep working, tomorrow takes care of itself.