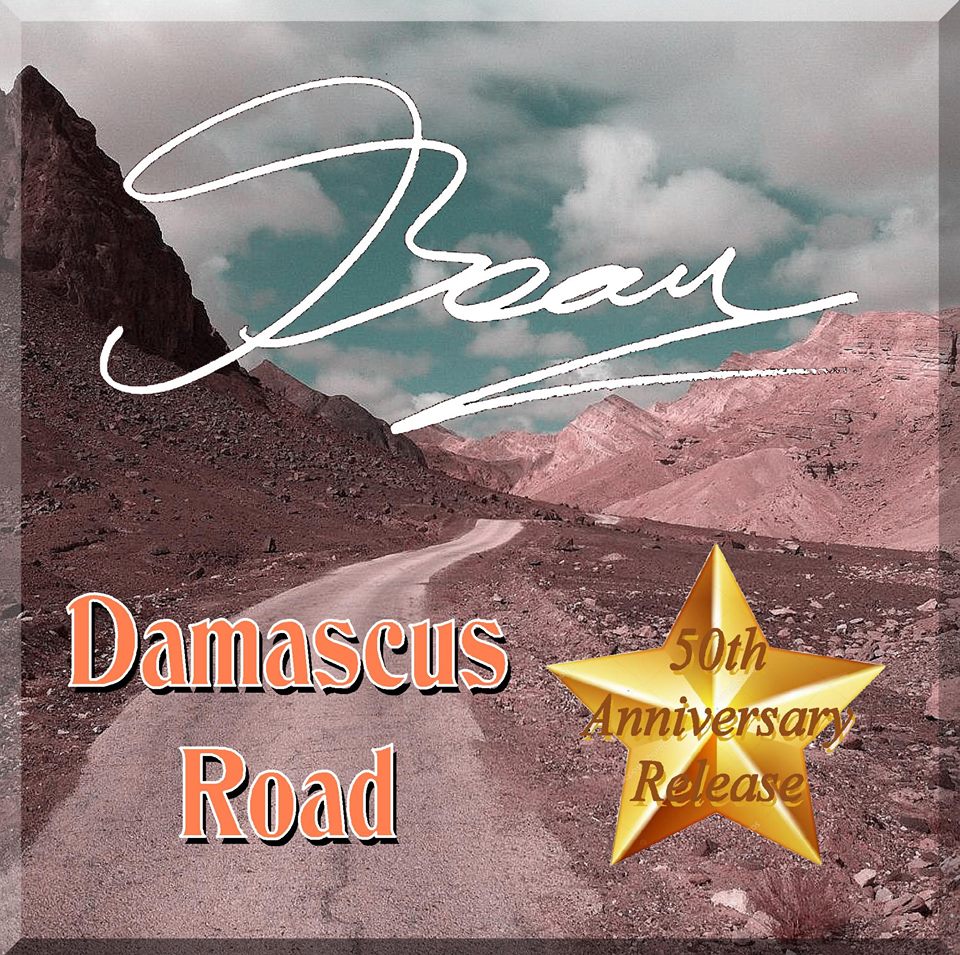 To celebrate the exact day in April 1969 when Beau (i.e. Trevor Midgley) released his debut album for John Peel’s legendary Dandelion Records (Medicine Head, Stack Waddy, Gene Vincent etc), comes the digital release of Damascus Road fifty years down the highway. He also appeared on the highly-collectable sampler album of that label, There Is Some Fun Going Forward, for the only recording as John Trevor (his middle names).

Beau’s second LP was backed by The Way We Live, the renowned duo that became known as Tractor when forging early ‘industrial’ rock. Following other Cherry Red releases by Beau this century—and the acclaimed Edge Of The Dark for Angel Air Records—comes a fine 13-song collection as another biting but erudite commentary of the age we live in by a 12-string guitar maestro and poet.

His influences include another 12-string classic, the bluesman Lead Belly (whose albums turned Beau from The Raiders in the ’60s to singer-songwriter himself), along with the protest folk of Phil Ochs, Tom Paxton and Bob Dylan, with some of Roy Harper’s acute story-telling humour mixed in. As Dagger Zine (USA) accurately put it, Beau’s “terrific batch of folk songs would make Ochs or Zimmerman proud…and is surely long overdue wider recognition now”. His dissecting of the English and American psyches is a treat, indeed not only contemporary but imbued with historical facts, events, and insights too. Since 1969 his originality is to take a theme that’s more than mere grinding of an axe while more salient than soapbox, because showing how life is today. Beau peoples his songs with characters, inhabiting them in a way with both personal and general relevance, to the extent of flagging moral duty while involving thought-provoking pleasure.

As he says, “there’s literally no end of topics to write about. Every page in every newspaper has a song in it, every TV broadcast, everything you see and hear on the street”. He has the rare skill to lift a report out of its bland initial coverage into a sphere where questions should be asked, consequences noted, morality not ignored. Damascus Road isn’t sandals and grit alone, but another journey in an ongoing saga across a landscape that has much to endear it as well, even when events or attitudes seem to conspire against the natural terrain around it.

With such an enquiring mind, this becomes (as it was for Ochs and his like) a far-reaching historical document of Now, a painting that is more wall-covering fresco than still-life. We live in an age when morality is so debased that a European Union member (Poland) allows a major theatre to produce a play called and based on Mein Kamf or film entertainment about pedophilia by the Catholic church, or neighbouring states put refugees (victims of western aggression) including children in concentration camps though droves of their own economic migrants are a completely different matter. Saudi Arabia is contracted after barbarously murdering a journalist and bombing children, while Russia is sanctioned after (probably too quickly) annexing a former territory following a referendum there. Catalonia bears witness too, as propaganda promotes scare-mongering and outright lies while it seems, in this age of censorship, that music alone is capable of countering what is projected as gospel narrative. Heroic whistleblowers seem to be the only source of truth, and Beau takes stock of this in his own song-writing role.

Like writer-thinkers such as Christopher Hitchens, Noam Chomsky and John Pilger on youtube (see his recent RT interview about Trump for example), Beau can also show the world around us for what it really is rather than what is being projected by vested interests (even laws have consequences we’re reminded), be they governments or their agents such as one-dimensional corporate media and “back-scratching” ‘Men Of The World’ that sardonically opens the album with jangly guitar. In an amusing-but-grotesque dialogue in the traditional folk/blues form of call and response, a “back-scratching” Freemason is a drunk driver embroiled in the fall-out of the police (or press) and “her Ladyship”.

‘Kitten Kaboodle’ is a traditional casting couch ballad about an actress manipulated by such as the producer for a James Bond film, a “voluptuous blonde” for an “all-action movie”. The longest song ‘Lacey Fayre’ is a wry, sad-but-true image of the consequences of what was emancipation a century ago. Her-of-the-title is Modern Woman, post-Suffragette against the Establishment in the country of its origin, for whom freedom for her and friends means simply bargain booze, 18-30 holidays, clubbing and the local hospital’s A&E department. She has her own social media site with thousands of subscribers (of course, safety in numbers never fails does it?) as a heroine of our age (in her own bleary eyes at least).

As Noam Chomsky says, “citizens have been turned into consumers” who don’t even care that their brain-numbing technology is monitored or that they pay to advertise the controllers on their clothes! Another, darker side of this coin is the sobering ‘Let’s Get The Show On The Road’, inspired by a social worker or do-gooder imparting her wisdom to a rough-sleeping ‘non-person’ beneath a Norfolk motorway underpass, with a tragic but perhaps not wholly surprising finale. An element of modern life is the huge disparity between the rich and rest that we all know about, partly explained by self-serving cliques and cabals. ‘The Great Game’ focuses on one of them: diplomats’ trickery, wiles and poses while above the law. As one of them defined it four hundred years ago: “An ambassador is an honest gentleman sent to lie abroad for the good of his country”. The last element, only, may be questioned today. ‘The Quiet Ones’ points the finger at modern Machiavellian attitudes of strong against weaker states, using fake news, social media manipulation etc. to further economic agendas, what the CIA is quite happy to call ‘soft warfare’ in their publications.

The sense and consequence of formal language balanced with the irony, humour and occasional cynicism of informal language, especially catch-phrases and idioms—what some call nuggets of folk wisdom, Freud used them in his own way—is one of the happy marriages in his work. Witness a step-by-step guide on how to become a demagogue…or how to spot such “a man on the make / a firebrand without an emergency brake…No, it’s not pretty but yes it does work / all that you need is a malevolent jerk” who knows which buttons to press (‘Demagogue Rules’). This precedes another modern tragedy that we are exposed to, always media-informed that no one knows why it happened. The terrible massacre in 2017 at a music festival in Las Vegas is the subject of the title track. Perhaps he imagined himself a modern-day Jesse James?

‘Disciples’ is an Orwellian warning to not blindly defend what may be indefensible regarding a beloved entertainer or politician in this age of mass communication. An orthodox view can often be flawed: the disciples are needed to rise and defend what may have been lost. Memories, often nostalgic, are actually in a ‘Rear-View Mirror’, receding as we travel along the road, whether the frailty of memory is collective or personal. It may be a shock but not even the Pilgrims landed on Plymouth Rock (they were not even pilgrims as such but self-exiles escaping persecution); Washington never touched the cherry tree as sure as Churchill was a member of the Druid Society and boasted that he never paid tax. Nostalgia ain’t truth, alas.

The splendidly-titled ‘Ballad of Tom Titterington’s Horse’, a nod to the troubadour of yore, examines tried and tested forms of transport alongside others’ views of them. ‘Child Of Aberfan’ is a poignant return to one of his earliest themes, the 1966 disaster that not only engulfed a school but the miners’ town and country with its shocking tragedy. Public responsibility, accountability and transparency may be well be returned to in half-a-century regarding the Grenfell Tower too: the Aberfan coal tips have disappeared but so have those who should have been held responsible for their negligence.

Some say “the end always justifies the means”, especially when toasting each other at others’ expense. The captains always protect their status quo while celebrating at functions for “Who is not entitled to a frolic and jape? / Ignore the gutter press equating fondling with rape”. The party must go on! Beau’s over-arching message seems to be that we shouldn’t be paralysed in thought or maybe action just because vested interests or number-safety would wish it so, which has always been the stance of protest song-and-word since time immemorial in various forms. (I would add, Albion, look at how other countries approach this!). As the late Mick Softley once sang at the time of Beau’s earliest albums, if you are not part of the solution then you must be part of the problem. Elements of the sixties are as relevant today as they were then.

While prolific nowadays and still vigilant at 72, there are no fillers. Some of his songs in their scope suggest a wider instrument palette may be also interesting (as on his second LP), a second guitar perhaps like Bridget St. John working with Michael Chapman (maybe with John Fiddler or Mike Cooper?), maybe even a band like Mick Softley turned to, though Beau’s guitar style is at times almost orchestral in its tones and his voice range varied for different song structures. His endearingly humble style remains as it was all those decades ago: thoughtful while thought-provoking, cutting whilst sympathetic to those on the wrong end of events whether newsworthy or otherwise.

Never bleak or too heavy in delivery, there is always balm for the wound. His lyricism is poetic, never sentimental or cloying (love songs are almost non-existent in his repertoire, unusually), more Baudelaire and Rimbaud than Verlaine or Auden. In this era of wage slavery, one might conjecture that this is white blues all its own. And long may it continue: a 21st century minstrel clearly forging his own path through the overgrowth while nodding to his august forebears and peers.