A new 3-CD box from Grapefruit Records is a loud re-mastered gem, a perfect accompaniment to the first volume three years ago featuring (most of) the usual heavyweights on the scene balanced with demo-only bands who shared their gigs. An excellent 53-track panorama of ‘freak’ music from 1968-73: Edgar Broughton Band, Arthur Brown, Sam Gopal (with ex-Hendrix roadie Lemmy) etc, no Pink Fairies but Deviants, no Hawkwind but stable-mates/fellow-travellers High Tide jamming par excellence. Freak-sounds from the underground of Ladbroke Grove and central London (Middle Earth, Temple in the Marquee’s street) along with nationwide free festivals are well-represented: as David Wells’ short intro says, these are the bands that shook the walls of towns up and down the country. More hair here than a yak high in Nepal cavorting in a fancy wig. 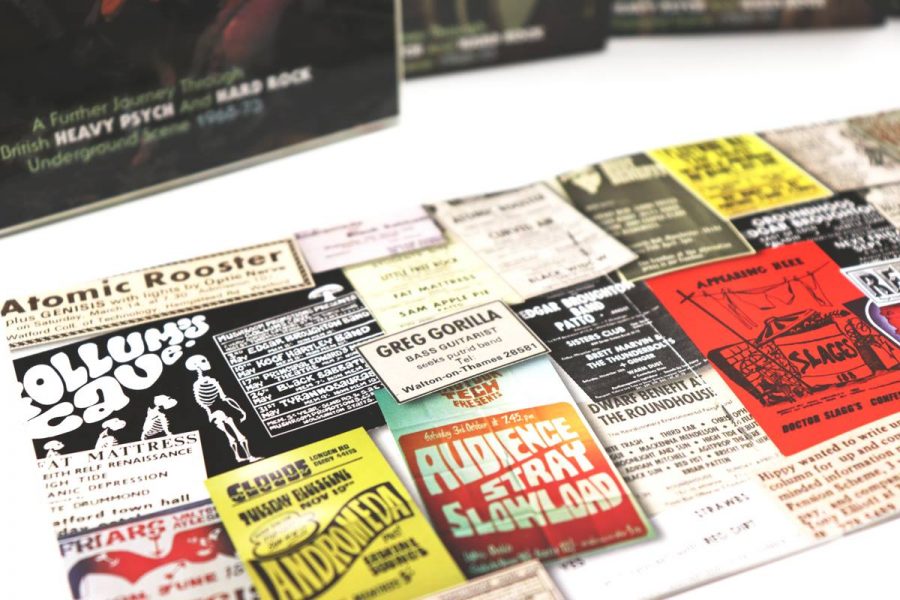 Talking of the booklet (an arti-fact in its own right) this reviewer is unsure why so many negative terms are used: “Neanderthal”, “catatonic”, “semi-articulate”, “sonic excesses”, “Cro-Magnon classics”, “terminally obscure” really, today? “Sab or Zepp wannabees”, the term wasn’t even coined until later, and doesn’t reflect the counter-culture’s magazines, gigs or ethos, not as I recall anyway. It was a time of boundary-breaking, thanks partly to developing sound systems and wider issues of course. Not a whiff of the peculiar idea of a tribute band, except the Beatles and Stones to themselves of course. We know Americanese has a difficulty filtering nuance of language—collaboration for Christ’s sake?! It’s negative—but this is a British compilation, not even English only. The booklet is otherwise superb, handy too in that it follows track order rather than alphabet.
It appropriately leaves the traps blazing with Budgie’s first album that became a template for later decades. The now-renowned on CD-1 sees an unusually heavy Jeff Beck and also Love Sculpture (featuring Dave Edmunds) for a razor-sharp, much-covered hit ‘Sabre Dance’ that began as an Armenian ballet overture (and covered on an LP for 11 minutes, ouch), Stray from an early session released only on CD, Sam Gopal’s percussion-swirling and bass-plucked ‘Horse’ earmarked for a single that never left the stable, and The Move when hairier with Wood and Lynne on board: almost sing-along, I’m told by an expert they were much heavier live though this packs a punch too. For gig-liggers or later vinyl collectors there is the always-fun solo-boggling Patto (more abrasive than usual from their post-Vertigo days on Island), clanking bullet-driven Leaf Hound, the Stray-like Slowload, the tasty twin-guitar power chords with melodic interludes of Cactus-like Orang-Utan, Arthur-Brown-like Monument, and one of the two best tracks by Ancient Grease alongside a solo-typhoon by Andromeda.

There’s also a rare seven-minute outing for Sam Apple Pie, who were at the first Glastonbury and later part of Atomic Rooster: they were always creatively original (heavy surf here?), Quo did parallel experiments later. Other longer tracks include Iron Claw (after King Crimson’s killer lyric), echoey, reverb-drenched, brutally menacing as a garotte, uplifting as a scaffold on the dawn skyline with a pounding drum outro and Bodkin, an organ-washing hard guitar quintet with thoughtful lyrics on reality t’boot. Stack Waddy contribute ‘Rosalyn’ (I’d have thought ‘Hey Mama Keep Your Big Mouth Shut’ more in-keeping, but I’m a nit-picker, by profession) though the stand-out surprise is the unbelievable pile-driver boogie Wicked Lady: forget butter, this cuts rivetted titanium! If you ever found Agnes Strange, this would be a similar reaction. Guitarist Martin Weaver told Psychedelic Baby recently that Wicked Lady were always a live band first because they saw recording as sterile. Living in Bulgaria today, he is starting a band with two other Martins! A true tour de force power trio.
CD2 features the longest track by Atomic Rooster, all spooky piano and effects as classic hard-driven keyboard rock from an LP that spawned a hit single (‘Tomorrow Night’); Edgar Broughton’s ‘Apache Dropout’ (not ‘Keep Them Freaks A Rollin’?) which almost hit the top 30 with a mash of Shadows and Beefheart; The Deviants’ rumbustious experiment ‘Somewhere To Go’ pointing to the Fairies (it was founder late Mick Farren who said they split because the others wanted to sound like Zeppelin), plus Alex Harvey’s pre-Sensational Band Tear Gas who rock in Hendrix-style: Regal Zonophone without a hit was always going to be like playing tennis with a hole in the racket.
There is also the Gurvitz brothers’ Three Man Army (yes, they were English) before fame with Ginger Baker. The Manchester band NSU only did one LP, on Stable, as did Red Dirt (at the time) on Fontana, Pluto (on Dawn), the crunching feedback riffing Human Beast (on Decca), Mouse (on Sovereign) with a long build-up to a spacey boogie, and Dogfeet (formerly Sopwith Camel) but there are also acetate-only The Rats (featuring a near-pubescent Mick Ronson of Bowie and Hoople fame), Dark (whose LP is among the rarest and later featured Wicked Lady guitarist Martin Weaver), Purple Haze (later Transatlantic’s Little Free Rock), Tonge, and the German-only released Glasgow-based Sunday. It closes with the even higher-octane Quo-like Freedom from their own Vertigo LP: not to be listened to if your head’s not adequately screwed on!
And nuggets continue to be unearthed on CD3. Headliners such as High Tide from their debut Sea Shanties of 1969, bleak lyrics for doom-and-multi-laden rocking; the early ’68, more driving non-orchestral demo of ‘Fire’ by The Crazy World of Arthur Brown; Glaswegians Stone The Crows from the third of their four LPs, featuring Scotland’s own Janis Joplin in Maggie Bell and also Alex Harvey’s brother, in an organ-led rocker. Warhorse loom from their Vertigo days and more guitar-based second LP, formed by ex-Deep Purple (’69) bassist Nick Simper who was also in The Flowerpot Men with Jon Lord (hear Simper’s recent work on Angel Air Records); some heady acid and riffing guitar in a near-eight-minute feast. They toured Germany and were on their T.V. before folding in ’74, splitting to work with Rick Wakeman on his hit album.
Who recalls the band often confused with others of the same name, Bullet? Here’s a B-side from Deep Purple’s short-lived label, ex-Atomic Rooster and Quatermass that became Hard Stuff as almost r ‘n’ r glam! No period comp would be spliff-worthy without Writing On The Wall, the Edinburghers moving to London when their manager opened the Middle Earth club—indeed they lived below its stage! ‘Lucifer Corpus’ was on the same-named label as its first 45 release before their acclaimed LP Power Of The Picts.
From the hard-working supporting cast come studio tricks galore from a Yorkshire co-operative that got on Peel’s Show (Lightyears Away); a Welsh trio rare as Dark for the same reason (a 99-copy only issue) who featured in a Melody Maker competition of 1971 and have been reissued on Light in the Attic Records: the misprinted acetate gave them their name, meant to be the last man on the moon, and a bit like Clear Blue Sky (Eugene Carnan); Hard Horse were on the same label as Incredible Hog and did other singles for the label; Tarsus were in the Northampton scene along with Wicked Lady and Dark but released nothing, a driving menacing raunch as unlike ELP as can be imagined.

Also featured are Natural Gas, who did two Peel sessions and have appeared on a bootleg beside pre-Black Sabbathers Earth; a band named after a locked facial expression whose 101-copy LP appeared on County Records (Sardonicus); and two rare bands involved with the Sentinel label (Frozen Tear; Thor) which was run as a ‘vanity’ enterprise from a series of West Country shops featuring mostly folk and brass bands (see this reviewer’s article for the Dust On The Nettles compilation). Thor are not the later Vancouver band, these also covered Chicago live! A rollicking version of ‘Paranoid’ is a good cover indeed. Another German-only release is Little Big Horn, formerly Tramline, on Bellaphon Records (Sunday, Diabolus, Steel Mill etc). Still going are Samuel Prody with their own website, yet another who never got their royalties though produced by a Tremeloes producer: ex-Sam Gopal Dream, a nice phased drum solo is rolled. The now-legendary 9.30 Fly contribute a post-LP demo from ’72, an original take on the blues classic ‘Hoochie Coochie Man’, and a combo also once with Sam Gopal known as Clark-Hutchinson lay an early ’69 blues ‘Someone’s Been At My Woman’, an ailment that came with the territory alas. Breathless stuff, reflecting this review! 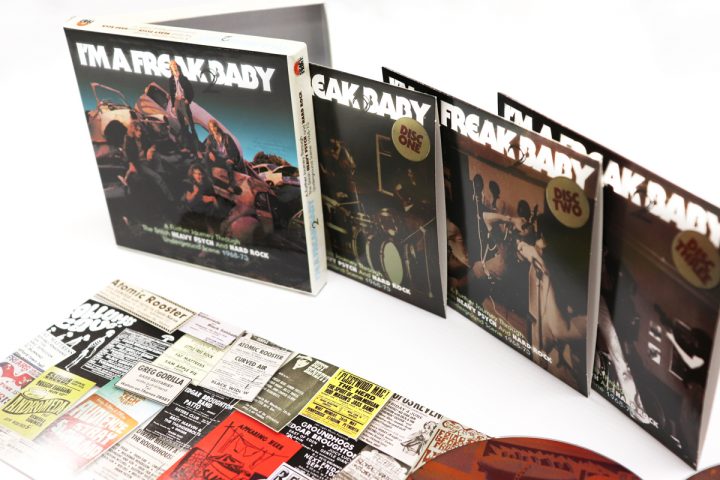 The albums are well-worth getting as well, all are essential or as good as. Some laid the groundwork for much that came later and shows the depth of the compilers’ archeology. A couple are on the first collection, so why no Incredible Hog or Agnes Strange? And why no Irish e.g. the original Skid Row? Nevertheless, five stars because, quite frankly without earnest, a superb near-four-hour trip which in content and spectrum can literally take your breath away or leave you scuttling around for your jaw. No frills, boas or pop. Rare for second compilations, some might say it even eclipses the first. With live-shot sleeves and forty-page compendium of facts and period art, this is one of the best box-sets of the genre on the market… ever. Now, why’s my Horlicks cold?
– Brian R Banks