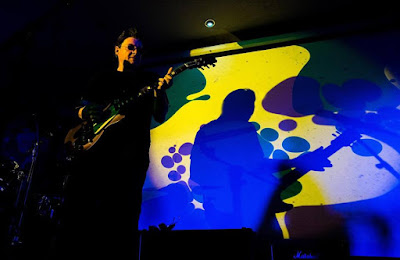 UK psychedelic acid rockers Heronimus Fin! Interview with Jon Buxton & Andy Cooke of Heronimus Fin.
Who’s in Heronimus Fin and what do you all play? Have you made any changes to the line-up since you started or is this the original line-up?
Jon: Today’s line-up consists of myself Jon Buxton: Vocals & Guitar, Jez Nutbean: Vocals & Keyboards, Andy Cooke: Bass Guitar, Colin Edwards: Second Guitar, and Ashley Buxton: Drums. Yes as the band has been together for over 25 years now there have been lots of contributors, the main previous members were Mike Bates, Terry Boazman, Paul Brookes (all drummers) and Paul Panic who played Bass for many years. We were a bit like Spinal Tap when it comes to drummers. 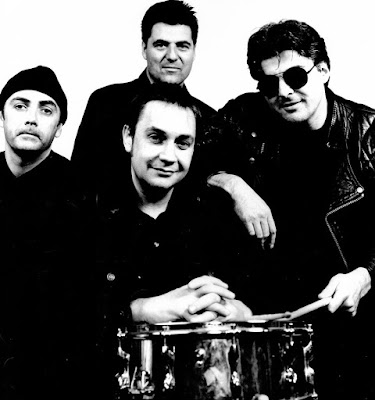 The original lineup
Heronimus Fin already played in the early 1990s. Were you a member of any bands prior to the formation of Heronimus Fin?
Jon: Myself, Terry Boazman and Paul Panic started in our teens in two bands Misspent Youth and The Accused. We then opened our own recording studios in Birmingham UK where we worked with other bands such as The Sweet, Felt and Napalm Death!
Andy: No, I played the occasional gig but Fin has been my first serious band and I’m loving it!
What do you consider to be your first real exposure to music?
Jon: A guy down my street used to work as a doorman at a local rock venue and when I was about 11 years old he introduced me to Led Zeppelin/Sabbath/Purple/Curved Air etc. and started to teach me the guitar…well there was no turning back. I still love that era down to this day.
Andy: I was raised in a house full of great 1950’s Rock n Roll records like Little Richard. Then one day when I was around 12 years old a friend told me about an album that had almost a whole side filled with a live drum solo…didn’t believe it, so I asked him to bring it to school. Turned out he was telling the truth! It was “The Mule” off Deep Purple’s Made In Japan album. Changed my life forever.
When and how did you all originally meet?
Jon: The band started when I met drummer Mike (Bates) who moved from Plymouth to my locality, he needed a someone to test out a new recording studio so we quickly formed Heronimus Fin (although we were originally called the ‘Orange Chair Lookalike Competition’ glad we didn’t stick with that one).
I had written a few songs for a friends play and through that met a great keyboard player called Jez Nutbean so I called on him, also my old friend Paul Panic (or Mr P as he was now referred to). Unfortunately after a couple of albums Mike had some major alcohol issues and left the band as he was such a great friend. Then we took a break. It was then that I met up with our current bass player Andy (Cooke) due to our love of vinyl collecting and he was the inspiration to get the band back on the road.
We called on another old musician friend of ours Terry (Boazman) to play drums and Andy called up Colin (Edwards) from his previous band to play second Guitar, that was that until Terry due to several other musical commitments wasn’t able to continue. That’s when we drafted in my son Ashley as our present man on the skins (that incidentally is why there are two drummers featured on The Pharmacist album). As I said ‘Spinal Tap’
Andy: I met Jon after he ripped me off with a few records he sold to me (kiddin’)! We started talking about our love of 1960’s /70’s psych rock and realised how similar our tastes were. He then invited me over to have a jam (translated ‘audition’) which evidently I passed and he asked me to join the band.
What does the name “Heronimus Fin” refer to in the context of the band name?
Jon: I went to an English Grammar School and I used to take in albums by Mott the Hoople, Jethro Tull, Amon Düül II, Alice Cooper etc. and the other kids would get freaked out by the weird names… I loved that. Also people would often struggle to spell them i.e. Led Zeppelin “…surely it should be spelt Lead Zeppelin old chap?” So Heronimus Fin was from that world (Monty Pythons Flying Circus anybody?). When people write about the band we’ve been called Harmonius Fin, Hermogenous Fin, Heroneus Fin, Humungus Fin, Horonimous Fin even our live sound man Carl still sometimes announces us as Hermonious Fin ‘bless him’.
Can you share some further details how your latest album was recorded and released?
Jon: We have our own recording studios ‘Garden Records’ which we usually use, however as my son Ashley had never had the experience of recording in a top studio with a history, we opted for that.
I remembered John Rivers and Woodbine Studios from my days working with Felt. I knew of John’s impressive track record (Ghost Town – The Specials, The Nightingales and Ocean Colour Scene) and he was still an indie set up. The whole thing was a very positive experience which I think is evident in the music.
It’s released in 3 formats Vinyl, CD & Cassette; which all have a limited first issue, the second issues will have different designs as we like to keep things collectible.
Is there a concept behind it?
Jon: Absolutely, it deals with Steven who suffers from depression and turns to prescription medication to try and overcome it, this leads to him becoming addicted to the medication so the solution becomes the problem! The songs tell his story…his fight to combat his addiction. 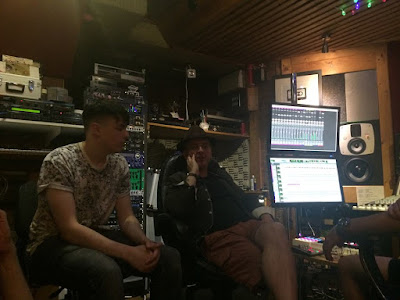 Woodbine Studios, December 2017
I really love the production of the album.
Jon: Thank you. As a band you’re always trying to get the balance between making a well recorded/produced album but not losing the live energy of the band and we feel we definitely achieved that. We also approached the initial recording process with the knowledge that it must cut well on vinyl. John Rivers did a brilliant job. He said it was the best sounding vinyl production he had been involved with. However it was never meant to be a modern sounding, sterile production that you seem to hear on many releases these days, it was deliberately meant to sound like it was recorded in early 1970’s. John was in his element as he owned all these great vintage f/x which he rarely got to use, but we used lots of them, he said he was fed up of the usual customers question “Do you have auto-tune?” John: “Yes but I also have some great Phasers, Synths, ADT, and lots of Percussive instruments you can use” customer: “nah let’s just stick with auto-tune & samples”. 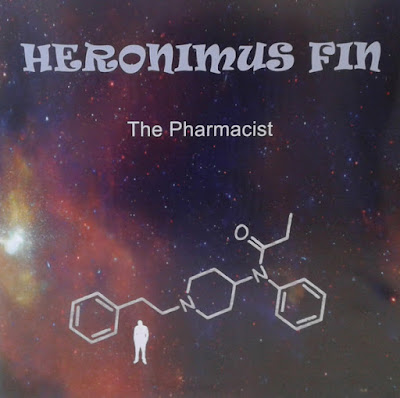 Who is behind the artwork?
Jon: Credit has to go to Andy on this one. He is a real connoisseur when it comes to album artwork. He has met with Storm Thorgerson (one half of the famous Hipgnosis team – Pink Floyd, UFO, Led Zeppelin, AC/DC, Scorpions etc etc) several times and purchased some originals, he’s always dragging me across the country to various exhibitions. My only brief to Andy was it had to be a bit of a gimmix sleeve the rest was really down to him and he did us proud!
Andy: Ahh thanks Jon.
You released four other albums. Would you like to tell us about those albums? How would you compare them with your latest release?
Jon: With the first 2 albums The World According To… and Riding The Great Fantastic you have to think of me in the Ian Anderson (Jethro Tull) mould as I had a vision and really the band just applied that influence. Musically those albums would fit more in the late 60’s Psych mode (Barrett, Pretty Things/Blossom Toes/Kinks). 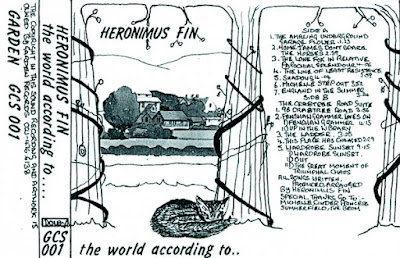 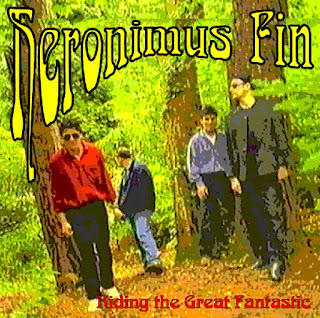 The third album Bloodguilt was a marked change in that it was recorded live and allowed all the band to add their own personal influences. As it was live it had a nice rawness to it. It was at this time we’d signed a deal with BMG and things were really starting to take off big time. We were in all the national newspapers, on Mainstream TV here in the UK, however we used a historical picture of Adolf Hitler and the Pope on the front cover and suddenly people started refusing to stock it, the UK music mags completely misunderstood the meaning and went for our throats, so we withdrew it and changed the sleeve. As you can appreciate by the time it was reissued the momentum had gone. Interestingly though the vinyl test pressing has now become a real collector’s item. It was also at this time that the drummer had his drinking issues so we slowed it all down and I discovered ProTools. 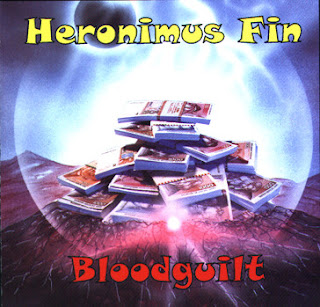 This lead to remastering all the old analogue tapes of the early albums/out takes etc. and we put together our 4th album Blown Into Another Man’s Sky which was up for The Mercury Prize, in hindsight as this album also dealt with High School shootings and other controversial subjects it was never going to be a winner was it? 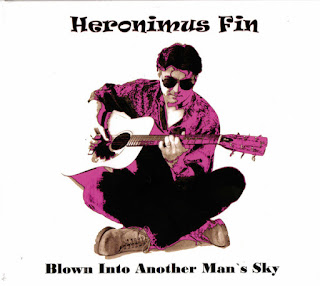 All of your material is released on Garden Records. What’s the story behind Garden Records?
Jon: Having been involved in the music business in their youth and the control it had over their creativity, Garden Records was set up by a group of musicians as a means of managing/selling/recording their work without interference, rather like a musical Kibbutz. Unfortunately musicians and business rarely mix so many fell by the wayside and Garden Records is now run by just a small team and has also added reissues to plump up the catalogue. 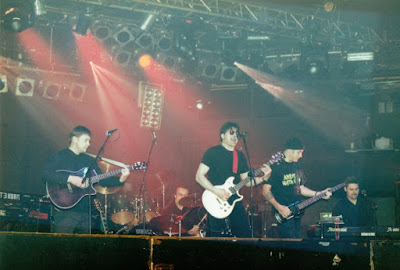 Live at The Astoris London 2001
What are some future plans?
Jon: Over the years the band has been fortunate enough to make some great friends/contacts throughout Europe and it is still our desire to conduct a small promo tour, as with the US where we have a great fan base but that might prove a lot harder to do!!
Let’s end this interview with some of your favourite albums. Have you found something new lately you would like to recommend to our readers?
Jon:
Blossom Toes – We Are Ever So Clean
Nick Drake – 5 Leaves Left
Pink Floyd – Atom Heart Mother
Golden Earring – Moontan
Various Artists – Nice Enough to Eat
Genesis – Lamb Lies Down
Stray – Stray
Kinks – Arthur
Led Zeppelin – III
Camel – Camel
Budgie – Never Turn Your Back on A Friend
Andy:
Budgie – In For The Kill
Kate Bush – Hounds of Love
The Doors – The Doors
David Gilmour – Rattle That Lock
Nick Harper – Lies, Lies, Lies
Pink Floyd – Meddle
Not really a new band but most underrated – Rose Hill Drive (first album – awesome)! 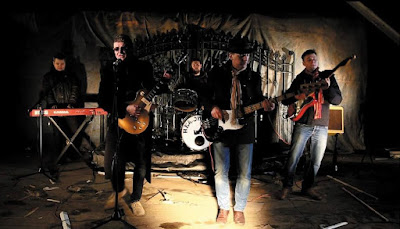