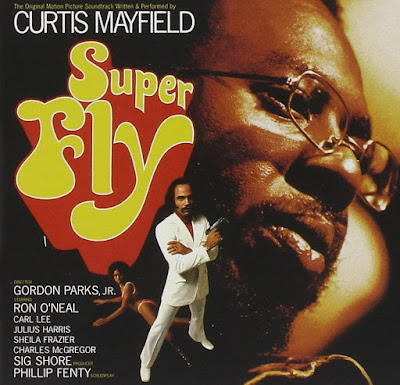 Curtis Mayfield – Superfly (1972)
Curtis Mayfield’s Superfly stood at the crossroads, ushering in a new bright and infectious sound, one that was all about the ghetto, though with its groove laden background, reached out and captured the hearts and minds of white listeners during the hot summer of 1972, where the record went on to sell more than five million copies.

Alright, in all honesty this album did not encapsulate the black experience in America for everyone, though for an element it rang true, embracing the decline of cities across this country, while those of culturally similar backgrounds began exploiting each other, creating even more despair and disillusion. Yet in the same breath, one can see this song and the full album as the cohesive story of the dispossessed and forgotten strivers, those who didn’t, don’t, or couldn’t believe the American dream … so they created their own, with all of the music brought to life with a sense of ominousness, while the horn arrangements only accentuated that fact seeming to ring out as warning alarms.
As to the music contained in this package, perhaps no other element is more tastefully, yet bittersweetly satisfying than the song “Pusherman,” filled with a nonpareil funkiness that roots ambiguously for the underdog (the dope dealer), even in the face of the destruction he brings. Of course this attitude is easily understood if one remembers that the War in Viet Nam was just drawing to a close, with black men returning to this nation unafraid of overweight white cops sitting in their police cruisers eating jelly donuts, talking of their high school glory days. Of course it wasn’t all the result of Viet Nam, the assassinations of Martin Luther King, Bobby Kennedy and the election of Richard Nixon all played their parts in causing the reality of this soundtrack to ring true.
Superfly was intended to spill from your stereo bigger than life, filled with entanglements that were beyond analyzation, and to that end, Mayfield was no saint, being arrested many times for his abusive behavior toward women, where perhaps our tolerance of this aspect only encouraged others to swagger down the same path, as they were taught that this was how life was lived. So, while Curtis Mayfield may be considered a rare American poet, one who was capable of jabbing social commentary, he certainly lived a contradictory life. Nevertheless, the album was a splendid vehicle for Mayfield, one that’s certainly been attempted since, yet stands as a singular crowning achievement, perhaps because Mayfield was at the right place at the right time with the right skills.
Despite all this, the underlying current was intended not to champion, or revere the seedy underbelly, though it did have that effect, as its intentions were that of anti-drug, self liberation and social awareness, all delivered with musical diversity and fleshed out with perfection … solid grooves laced with adventurous stories, that certainly inspired the likes of Bruce Springsteen.
Superfly is an album you can’t walk away from, it will have you stopping on the streets as the songs spill from open windows, or you’ll linger a bit too long at a stoplight as wah-wah guitar solos flood into your car from another, and if any of the songs happen to float from your radio, you’ll be making mental notes to find this outing next time you’re out looking for music.
– Jenell Kesler
© Copyright http://www.psychedelicbabymag.com/2018
Curtis MayfieldFrom The VaultJenell KeslerReviews