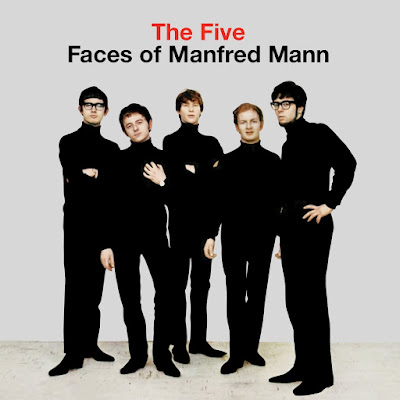 Manfred Mann – The Five Faces Of Manfred Mann, Mann Made, Mann Made Hits, Soul Of Mann (Umbrella Music LP/CD)
These four “artist approved” albums constitute what is the earliest chapter in the lifespan of one of the original, London-based R&B groups who began life at the dawn of the early 1960s beat boom.
Although never quite given the overall due concern and consideration as, in hindsight, has been afforded such era heavyweight contemporaries as the Rolling Stones, the Yardbirds, the Kinks, the Animals, Them and, say, the Pretty Things, the Manfreds – as they are lovingly known by their many fans – however, are every bit deserving of similar street credibility and kudos. Throughout this quartet of albums they, amongst other great things, manage to fling off two or three truly authentic sounding, jazz-inspired outbursts, none more so than Cannonball Adderley’s ‘Sack Of Woe’ – featuring the first of Mike Hugg’s dexterously applied vibraphone elucidations, ‘Mr Anello’ and the totally top drawer ‘Spirit Feel’, the latter as good an example of existential jazz-beat extrapolation as could be heard on the go anywhere within the realms of the sixties pop group scene at the time! There are also a few forays into more blatant mainstream chart pop territory – a move instigated mostly by Manfred Mann himself, as revealed in the liner notes to 1966s “Mann Made Hits” collection. Moreover, to any self-respecting beat / rock fan none of this pop-type fluff can deter from the immense pleasure brought about by entering into the hugely entertaining world of Manfred Mann. I mean how could anybody turn their nose up at such as the monster smash that is ‘Do Wah Diddy Diddy’ and the sight of them performing it on television (re-runs in the 80s of course) with Paul Jones weilding a ton of maracas out front?!? And if you haven’t experienced this already, I must say that even such as these little commercial pop dalliances are all rather fine specimens of the art, and are all more than just tasty little morsels. 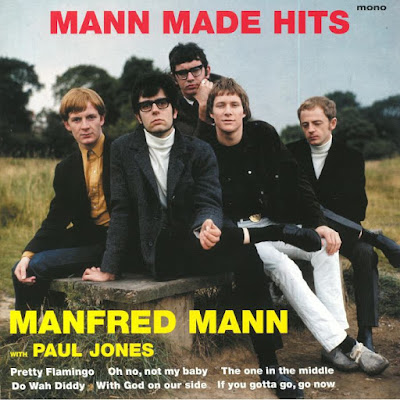 As the sound of, especially, their 1964 debut long-player “The Five Faces Of Manfred Mann” attests, the group were very adept at the beat group game, and every bit as convincing in their varied presentation of a largely blues-based repertoire than some of the more revered 60s groups around. The Manfreds also had true star quality as witnessed by the talents of lead vocalist and blues harmonica blower Jones, and their more than adept organist, Manfred Mann the man. And while we’re at it let’s not forget the rest of the Manfreds: bassist/occasional guitarist Tom McGuinness, drummer Mike Hugg and main guitar figure Mike Vickers were all noteworthy players in their own way, as were those quality sidemen from the 1966 configuration who augmented the line-up with aplomb. Same goes for the late, legendary bassist Jack Bruce whose brief tenure in the group would result in only one recording, the much-maligned, but nevertheless monster hit single ‘Pretty Flamingo’. Throughout this crucial stage of the group’s early career, much of the material they offer is often driven home in a crisp welter of gritty, hard-edged British beat action which not only serves as an illuminating beacon to the scene as was back then; and in many ways, musical integrity and production values chief among them – John Burgess (producer) and Norman Smith (engineer) proving what a formidable duo they were in getting all the group’s eclectic sound ideas down on tape, and with a clarity that is scarcely bettered on records from this still embryonic era of rock! That the sounds also swing with a considerable swagger plus, as and when required, can rock out with edge and attitude to spare says much about the team as a whole. While it’s true some of the covers here are more well known and well loved from the readings given by other groups, let it be said that the Manfreds’ interpretations of such as Howlin’ Wolf’s ‘Smokestack Lightning’ has a power that truly slays, whilst the personal touches deployed in decoration throughout ‘I’ve Got My Mojo Working’ and ‘Down The Road Apiece’ render these versions irresistible; riveting from start to finish. Then there’s their own self-penned compositions, some of the best under the creative writing banner of Jones, or Mann/Jones, Jones, Mann, Hugg and other similar writing permutations… such as ‘Don’t Ask Me What I Say’, ‘I’m Your Kingpin’ – both these titles are truly d-e-a-d-l-y. Other choice numbers here include ‘Without You’, ‘You’ve Got To Take It’, and the Tom McGuinness-penned slow-burning killer ‘L.S.D.’, a distinctive feature of the group’s second opus, 1965s “Mann Made” but also included on the after-the-main-event, and (mostly) instrumental set “Soul Of Mann” issued in 1967. In 1966, crude Dutch R&B / punk legends Cuby & the Blizzards would issue ‘L.S.D.’ too on a Philips label 45, turning it into a barnstorming tour de force in the process, and giving it the extended title of ‘L.S.D. (Got A Million Dollars)’). 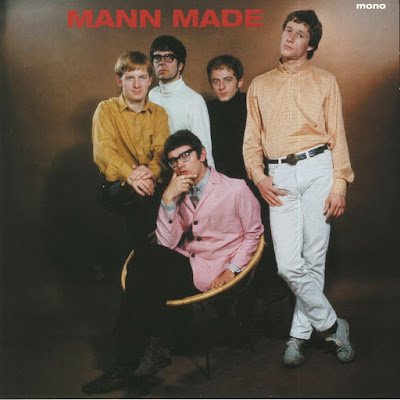 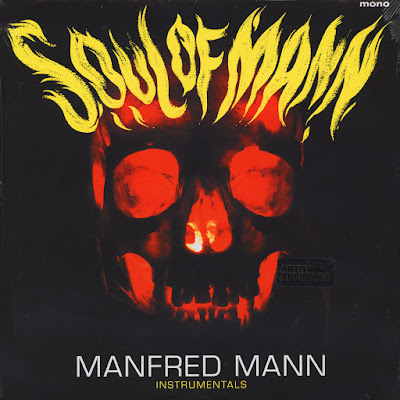 The collective results of this early compendium of albums stands the test of time and are more than a match for any of their peers. The group at this stage, 1964-66, are at their most thrilling and expectant, especially so when channeling their craft and graft through performances that are steeped in tough-edged R&B arrogance, beat-punk style insouciance, bohemian cafe-style jazz and, yes, those very smart, up-to-the-minute catchy pop moves; to say nothing of those hell-for-leather demonstrations of individual maestro-ship demonstrated within the realms of each of their chosen musical tools. Remember their clarion call, as featured on the weekly the-weekend-starts-here style television programme “Ready Steady Go” as well as serving as one of the group’s biggest chart hits: “5-4-3-2-1… uh huh it was the Manfreds”! Indeed they are and still sound as powerful and commanding today as they did then. We could still all do with some Manfreds in our day-to-day lives so get with the scene man.
I suppose, if you want to nit-pick somewhat, you could say that a trick or two has perhaps been missed with these releases, in that there are no bonuses or outtakes, unheard demo’s from the period in question etc, but the upside is that these all sound rather incredible; crisp, clear and hugely dynamic as has been alluded to earlier. Although each album contains only a scant booklet, these include some great photos and insightful texts; each with a different recollection from core members Paul Jones, Mike Hugg, Tom McGuinness and Manfred Mann.
– Lenny Helsing
© Copyright http://www.psychedelicbabymag.com/2018
Lenny HelsingManfred MannReviews