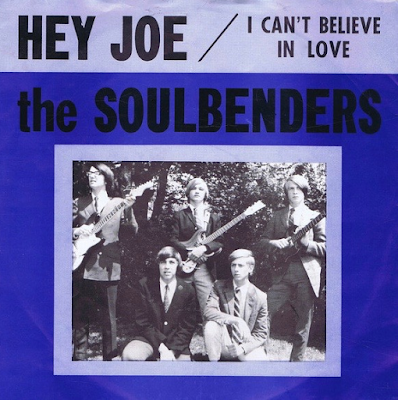 The Soulbenders – Hey Joe / I Can’t Believe in Love (1967)
Tracking the number of covers for the musical standard “Hey Joe,” made famous by Jimi Hendrix, though penned and registered for a copyright by Billy Roberts back in 1962, with the earliest known recording of the song being laid down by the garage band The Leaves in 1966, yet still, others claim that Dino Valenti gets the credit, who also went by the name Jesse Farrow and Chester Powers, and was a founding member of Quicksilver Messenger Service.
“Hey Joe” has always been a mainstay for musicians to cover, though most use the traditional score and then jumping off, psychedelicizing or blues-ifing the number, often with a rather extensive solo riff as the crowning achievement for this song about a man on the lam, headed to Mexico after shooting down his unfaithful wife.
Regardless, The Soulbenders had a rather successful run with the song, though sadly, their entire collection consists of but three singles based solely on cover versions of “Hey Joe,” “Seven and Seven Is” along with “House of the Rising Sun.” What The Soulbenders bring to the table is a fresh edition of the classic, sounding as timeless today as it did when they originally committed it to wax. The Soulbenders lace the song with a hazy breeze feel throughout, one that rolls on comfortably, sounding nearly neo-psychedelic to today’s ears, featuring a short solo, bouncy production and pointed presentation based around a great organ riff with jangling guitars and lightheaded vocals that floated with ease and grace, simply perfect for the the AM friendly radio airwaves of 1967.
There were three editions of this single by this Grand Rapids’ band who sold out their initial 1000 copies within two days of its release. The second pressing of 1000 sold out rather quickly as well, as did their third pressing of 1000. As far as I’ve been able to discern, two of the labels are yellow, and one is red, all with a blue picture sleeve of the band, the reverse of the picture sleeve is blank white.
A collection of other numbers by the Soulbenders exists, though is a bit difficult to come by, The Michigan Tapes 1967 – 1971 where the band also goes by the name Phlegeton, and does contain some original material.
– Jenell Kesler
© Copyright http://www.psychedelicbabymag.com/2018
From The VaultJenell KeslerReviewsThe Soulbenders