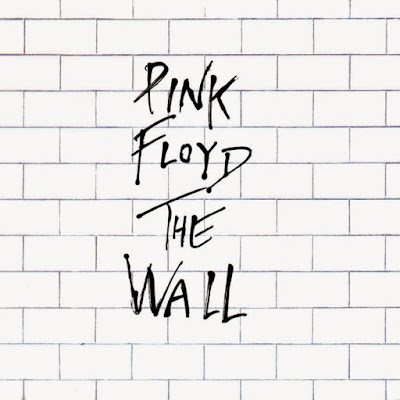 It’s taken me years to write this review for The Wall, an album from the world’s premier psychedelic band, one that was anything but sweeping in its expanse, anything but grandiose in its embrace of the cosmos, an album firmly rooted and earthbound, an album steeped in the attitudes of reactionary punk, yet dismissed by that genre as the singular band they wanted to tear down more than any other.
With recording beginning in 1978, though there were teasers presented during their Animals show, The Wall was an on again and off again proposition, being tweaked right up until the last moment, then rushed to store shelves in time for holiday gift giving, where in so doing, Pink Floyd managed to create one of the worst physically produced records of all time, with more copies being returned than kept due to lousy pressing, poor vinyl quality, with many even lacking a complete spindle hole. To compensate for these poor and lacking spindle holes, rather than repress, they were hand drilled, meaning the holes were off center more often than not, making the entire album a nightmare, almost as if this mess had all been arranged on purpose to reinforce the very nature and essence musically held between those vinyl grooves.
Of course the song “Comfortably Numb” was the stunning exception, almost an echo of what the band had come to be known for … but the rest of the album, now that’s a different story. If we begin with the artwork, there’s not one thing that’s pleasant, it’s the reality of an acid trip gone extremely sideways, the killing of anyone left over from the colourful 60’s, steeped in urban decay and horror. Without question Pink Floyd has always shown us snapshots of their individual pasts, everything from family to the crashing of Syd Barrett, yet on The Wall it’s as if Floyd have just walked out the door of an unfinished year long psychotherapy session … raw, open, intense, filled with memories from a period in time that have no context, memories that have been given no place to live, compartmentalized and nurtured into submission.
Now, those who were coming of age in 1979 have taken this album to heart, embracing it as a standard to be flown in opposition all that was happening around them. With that in mind, may I suggest that there were several other bands who had this line of demarcation, with The Rolling Stones being a prime example, the step from Sticky Fingers to Exile On Main Street left far too many Stones’ fans out in the cold, people who would never walk through that door again. As with The Stones, gone was the lushness and warmth people had come to expect and relish, and in came an emptiness that fans couldn’t understand. Perhaps it was the drugs of the times, perhaps it was a bit of selfishness on the part of the musicians, thinking that they could give us any vision of their lives and that we’d wrap our arms around it with love … but it’s not my purpose in life to make any of the members of Pink Floyd feel good about themselves, and had this album been released with the usual host of singles it may not have been taken to heart by the public in the manner it was. In actuality, The Wall was foisted upon the world, smashed down on music lovers with Pink Floyd saying, “Here, deal with this, I’m giving you nothing but my pain, and I’m going to give it back to you relentlessly over and over again in concert for the rest of your life.”
Though if we look at the year 1979, the killing of the students at Ohio State was finally settled, the American ambassador to Afghanistan was kidnapped, for the first time ever Mardi Gras was canceled, Three Mile Island Nuclear Power Plant melted, the Unabomber continues his siege, gay and lesbians riot in San Francisco, then there’s the Iran Hostage Crisis, eleven Who fans are crushed at a concert, and of course, McDonald’s introduces the Happy Meal, where we find The Wall forever being played out on a cassette tape inside a yellow Sony Walkman that’s hanging off a beltless pair of baggy acid stonewashed jeans decked out with a sporty jacket with huge padded shoulders, all bouncing along the sidewalk on expensive unlaced sneakers, making it perhaps the worst album the band have ever done. Mostly, The Wall is so boringly bad because it’s so derivative and dark, a singular glorified Roger Waters’ solo effort of the megalomaniac who simply was unable to cope with this millionaire rock star lifestyle, dredging up an unhappy past and pouring it out like a spilt salt shaker across the table, tasty on the fingertips, though offering nothing of substance and leaving one thirsty for something relatable.
The Wall is exhausting, a drunken party album played in the background, one where half conscious faces mouth the only phrases they can string together, and then go quiet. There’s no reason to ever play this album more than once, just as there’s no reason to read “Diary Of Anne Frank” more than once, “less of course you fancy yourself to be a Woody Allen wannabe, immersing yourself in the pain and suffering of those you never knew and will never be able to relate to.”
Pink Floyd are a funny old band, and I say that as one who was there for their arrival, leaving me wishing you were still here on the dark side of the moon with me. So, if The Wall resounds for you, then by all means, play it at high volume from the rooftops … for me, The Wall will forever be remembered as nothing more than a double negative.
– Jenell Kesler
© Copyright http://www.psychedelicbabymag.com/2018
From The VaultJenell KeslerPink Floyd