From The Vault: Jefferson Airplane – “After Bathing At Baxter’s” (1967)

From The Vault: Jefferson Airplane – “After Bathing At Baxter’s” (1967) 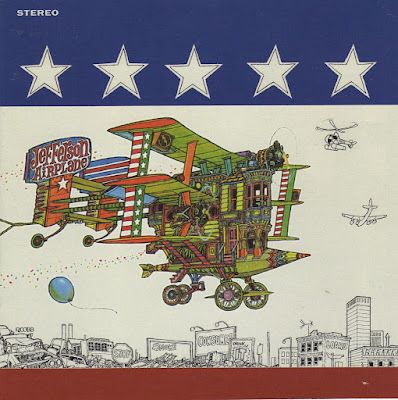 There’s nowhere to begin with After Bathing At Baxter’s than with the cover art, where for a sixteen year old in 1967, I was completely captivated by a tri-winged San Francisco style flying house, complete with marijuana bushes peaking out of the windows, that in full colour was aimlessly winging its way over piles of black and white trash, a sea of pollution and debris, where balloons and coloured confetti (though I was informed that this was blotter acid at the time) were being dispensed over just about any anonymous city in America during the middle of the psychedelic 60’s. Of course over the years I’ve come to learn that this flying house represented the 2400 Fulton Street pad that The Jefferson Airplane called home, and oddly enough wasn’t painted in day-glow paints, but rather totally in black and white, at least from the outside.
While the Surrealistic Pillow album brought The Airplane to center stage, it was After Bathing At Baxter’s that defined this band and the journey into the hearts and minds of the counterculture generation, flagging these high flying minstrels as a group of revolutionaries out to subvert the youth of America. With that in mind, the album is much more psychedelic than people give it credit for being, with pondering lyrics that ask question that could only be asked from seeing the world through psychedeliczed eyes, such as “Will the moon still hang in the sky / when I’m high / when I die?” or “Does the sky look green today?” not to mention the dadaesque feedback that opens the album and a mixture of words such as “armadillo,” injected for no reason at all, other than for the sake of embracing weirdness … and truth be told, that was enough of a reason, especially with Grace wailing away singing “It’s a wild time / I’m doing things that haven’t got a name yet!”.
After Bathing At Baxter’s isn’t an album to be listened to, it’s an album to be assaulted by, as The Airplane attack everything from middle America, to womanhood and everything in-between, and it’s all done as a celebration of freedom and self liberation. There is nothing commercial about this record, it was designed for the hip, those who got the joke before it was spoken, those willing to be a force to be reckoned with. Of course “Somebody To Love” was the soundtrack of the day, yet Surrealistic Pillow, the album the single rose from, stood in stark contrast to what The Airplane were doing live, which was much darker, and plays out here in all of its psychedelic glory. This is not to say by any means that the album does not have its flaws, these flaws are easily heard and have not aged well, but for the time, these aspects (such as overindulgent jams) were pure experimentation that broke new ground, giving The Airplane a surefooted platform from which to take flight on their more controlled and pointed future releases. 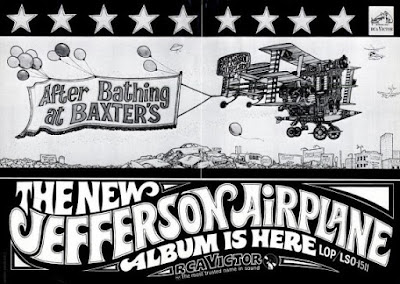 With the album composed of songs strung together into mini-suites of sorts to create a bizarre aural collage of lengthy jams, screaming guitars, some extremely beautiful moments, and a great deal of raucous ones, all was mixed with the alchemy of intellectualism, where The Jefferson Airplane manage to embrace the weird and the disconnected, yet at the same time intertwined it all as a freaky acid trip … though surely one I won’t wish to have taken. While nearly contextually unlistenable with today’s ears by those who weren’t there then, I embrace this gem with my total being.
*** The Fun Facts: Baxter’s was’t a real place, and it certainly was a bath, though in a sense it was.  “Baxter” was the band’s code for LSD, or bathing in acid, so the coded album title would translated to “After Tripping On Acid”.