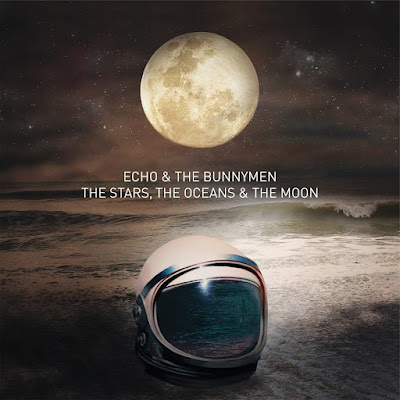 Echo and The Bunnymen – The Stars, the Oceans & the Moon (BMG, 2018)
We probably should have seen The Stars, The Oceans & The Moon coming, an album of thirteen well known and well loved tracks that lead singer Ian McCulloch felt needed not only to be reinterpreted but to be re-envisioned, if not outrightly reinvented. After all, on his solo album Holy Ghosts he not only revisits Echo & The Bunnymen material, but re-explores numbers from his solo catalog.

While there are two new numbers to complete this outing, it’s this reimagining that is the primary focal point of this release, with Ian claiming that he’s not doing this for anyone else, that he’s doing this entirely for himself, which of course begs the question, “Then why release it?” The album would certainly support the argument I made back in 2007, suggesting that Echo & The Bunnymen were merely a singles band, albeit a great singles band.
Echo & The Bunnymen were very much a manifestation in and of their time, with their music from that time sounding as fresh and intoxicating today as it did then, songs filled withs swirling guitars and a driving rhythm, songs that lingered long after they were finished, filled with stories that blossom in the wee hours of the morning, just as the moon is about give way to splintered sunlight. While each song found here was relentless in its day, Ian McCulloch seems intent on moving these brilliant ideas along with him as he ages, as his vision of the world changes, as his vision of himself and his place in this world changes, claiming that he’s focused with an intent to finally allow these songs to resound with all the greatness they deserve. To that I would suggest that if the songs hadn’t sounded so wonderful in the first place, that he might be onto something, though his reasoning is flawed, because all of the material drawn together here were exceptionally successful tracks, songs that defined so many of our lives.
Some of the numbers, especially “Seven Seas” are far beyond sparse, coming off with that unplugged feel, sounding less liberating and expansive, which is what Echo & The Bunnymen did so well, embracing an expansive nature to their world of sound instead of confining it as did say The Cure. Other tracks have been interwoven with deep arrangements of strings to instill a sense of richness and warmth. Oddly the album has the feel of a McCulloch enterprise and not that of a collaboration with his bandmates; yet with only Ian McCulloch and Will Sergeant remaining from the original lineup, this is entirely understandable.
That being said, the package is very enticing, where the album will be delivered on cassette tape, double vinyl records, double vinyl picture records, and of course CD’s, with all being available in both signed and unsigned versions … and yes, this comes off as a rather pricey affair. The album art features the same seaside beach image first used on Heaven Up Here, then again used on the albums Songs To Learn & Sing, The Very Best of Echo & The Bunnymen and several others, suggesting that Ian has never been content, feeling the necessity to re-envision even those classic album covers.
Make no mistake about it, this is a record for the card-carrying fans only, those interested in traversing Ian’s nocturnal footprints down an endless beach lost to time.