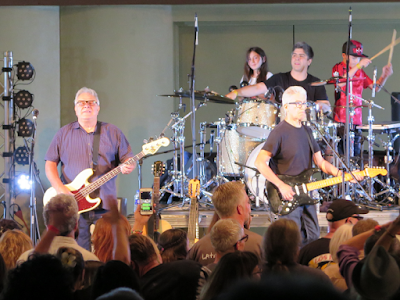 On a lovely post-Summer Solstice Friday night in Ojai, CA., Los Lobos took the Libbey Bowl stage to celebratory cheers from an admiring audience which had packed the house — and let it rip with a breathtaking cover of Little Walter’s blues standard “Up the Line.” The band followed up with a stellar rendition of the hard rockin’ “Shakin’ Shakin’ Shakes”(from its 1987 album, By the Light of the Moon); after which vocalist/left-handed guitarist (and Jimi Hendrix acolyte) Cesar Rosas took a pause to thank everybody for showing up and commented that although the band had played in neighboring Ventura before, it had never played in Ojai and that it was a beautiful place. The crowd hooted back its approval!
After which, Los Lobos’ other lead vocalist/guitar-master David Hidalgo broke into a soulful rendition of the group’s signature song “Will the Wolf Survive?” (from the band’s breakout 1984 album How Will the Wolf Survive?) — a ballad made all the more poignant by recent events in the United States regarding the highly controversial and utterly deplorable forceable separation of immigrant children from their families who have crossed the border illegally; even though, arguably, many of those families are fleeing failed states and looking for a path to better themselves and their economic opportunities by partaking in ‘the American Dream’.
And it is fitting that the greatest American band from East L.A.– composed primarily of first and second generation immigrants itself–would pen the perfect paean to the immigrant struggle of survival with dignity, as “Will the Wolf Survive?” contains the compelling lyrics:
“Standing in the pouring rain
All alone in a world that’s changed
Running scared, now forced to hide
In a land where he once stood with pride
But he’ll find his way by the morning light”
Comprised of four founding members from East L.A. who met during their high school days back in the 1970s–David Hidalgo (vocals/lyrics, guitar, accordion), Louie Pérez (lyrics/guitar/drums), Cesar Rosas (vocals/lyrics/guitar), and Conrad Lozano (bass), plus Steve Berlin (saxophone/keyboards) who joined the band in 1984, and the group’s most recent addition, Enrique González (drums/percussion), who joined up in 2012–Los Lobos, in its over 40 years of existence, has released a cornucopia of enduring albums in all manner of genres, refusing to be fenced in by mediocrity or conventionality. 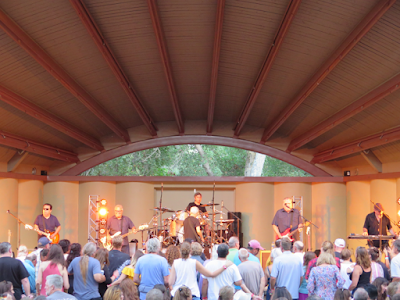 After playing “Wolf,” Los Lobos next tapped into its rich back catalogue of songs to bring the party spirit, as Cesar Rosas resumed vocal duties on several tunes sung in Spanish—“Chuco’s Cumbia” (off of Los Lobos’ 2006 disc The Town and the City), and “Cumbia Raza” (from the band’s 1999 album This Time)–with Louie Pérez on jarana and David Hidalgo on accordion, which got most of the audience up and dancing to the addictive Colombian musical groove.
A sublime cover of Sublime’s reggae-tinged “Pawn Shop” (which was itself based on roots reggae greats The Wailing Souls’ classic 1984 single “War Deh Round A John Shop) was next up–with bassist Conrad Lozano and drummer Enrique “Bugs” González keeping da riddim and David Hidalgo doing more than justice to the vocal duty. Next, Cesar again featured on badass blues vocals–and wicked guitar–on the slick and pounding “Wicked Rain” (from the band’s landmark 1992 album Kiko); before David came back with a stunning rendition of “The Valley” (from The Town and The City–the song has since become immortalized by its use on the hit TV series The Sopranos), which he dedicated to the maligned immigrant families in the Trump Administration’s cross hairs–saying: “We gotta help bring those families back together!” to cheers of empathy from the right on audience!
The magnificent “Mas y Mas” (from Los Lobos’ highly acclaimed 1996 release Colossal Head) was up next–on which the band blazed it over Hidalgo’s passionate vocals and drummer Enrique González’s mighty beat, while Louie Pérez shredded on guitar and Steve Berlin’s sax solo slayed! Winding things down, with David still on vocals, but switching from guitar to accordion, Los Lobos played the bittersweet “Let’s Say Goodnight” (from its 1983 EP …And a Time To Dance) –with Louie Pérez taking over drum duties and giving Enrique González a much needed breather. After that, Cesar Rosas’ smokin’ John Lee Hooker-esque blues stomper “Don’t Worry Baby” ( a song co-written by the great T Bone Burnett, from How Will the Wolf Survive?) resumed the frenetic pace and left the crowd in a frenzy.
When the band exited the stage, the fans roared out for more, and a promoter came out urging the crowd to chant “East L.A., East L.A.!!” if they wanted Los Lobos to do an encore (which was simultaniously heartening, ironic, and funny–considering that most in the audience were probably from the upscale towns of Ojai and Santa Barbara). The crowd complied, and shortly thereafter the maestros came back on stage again, with Hidalgo back on lead vocals, and welcomed two children–a boy and a girl–to join in with Enrique on percussion for a long extended jam of Buddy Holly’s rock ‘n’ roll classic “Not Fade Away” melded with the Grateful Dead’s timeless masterpiece “Bertha.” Rounding out the extraordinary show, the band played an outstanding medley of the Mexican folkloric standard “La Bamba” (popularized by the late great ‘50s rock ‘n’ roller Ritchie Valens) –which Los Lobos had made a no. 1 Billboard hit on the Hot 100 Chart back in 1987–and The Young Rascals’ 1966 super hit single “Good Lovin’,” which got audience members climbing up on stage and euphorically dancing around the smiling and bemused band members –at one point two ladies surrounded Cesar and swayed with him while one of them playfully strummed his guitar–in what can only be described as a free form fiesta! “We love you all!” said Hidalgo as the show ended–and it was obvious the feeling was mutual.
All photos by Sean Mageean
– Sean Mageean
© Copyright http://www.psychedelicbabymag.com/2018
Live ReportLos LobosSean Mageean