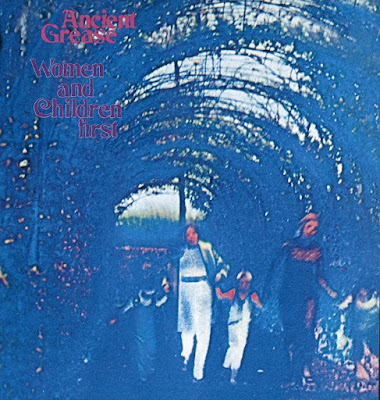 Hailing from South Wales, Ancient Grease made its way in the club circuit, making a good reputation for themselves playing covers under the name “Dust” in the late ‘60s. Shortly after having signed a deal with Mercury, they released this album, which received virtually no promotion from the label, leading the band breaking up. So, as they say, a typical early ‘70s one and done band.
There’s something about Ancient Grease that makes this band stand out from the many outfits of the burgeoning early ‘70s heavy rock scene – a tendency to wander and explore musically, taking unexpected directions in their adventurous playing. Time signatures changes, breezy acoustic guitar passages, prog-y structures and psychedelic fuzz guitar freakouts are expressed freely, and sound natural in the evolution of the songs. The record still stands the test of time, sounding fresh and groovy after nearly 50 years, thanks to gifted musicians and a great punchy production, with bass and guitar literally jumping out of the speakers. Eclectic music with hints of southern rock, heavy psychedelia and blues, but most of all guitar music. The first thing that hits you in the very first seconds of the opener ‘Freedom Train’ is a booming, stomping fuzz guitar riff. Washed in wah-wah pedals, thinned in chorus or crunched with saturated tones, the guitar of Graham Williams is the main protagonist of the record. “Eagle Song” and “Mother Grease The Cat” are the highlights for me, guitar riff assaults backed by a pounding rhythm section and inventing songwriting going in many directions. The title song closing the album is another tour de force, taking the listener through an epic climax drenched in swirling Hammond organ and wah-wah guitar improvisations.
Very much a beast of its time, the only album produced by this forgotten band is worth revisiting over and over if you can dig that time and place.
– Andrea Gelardini
© Copyright http://www.psychedelicbabymag.com/2018
Ancient GreaseAndrea GelardiniFrom The VaultReviews