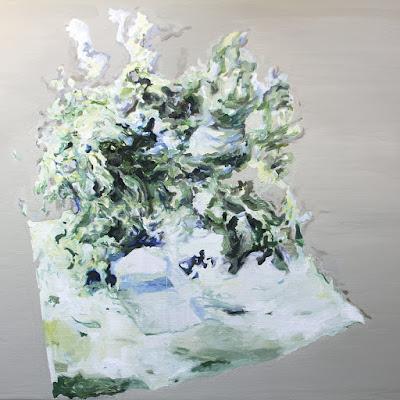 Do you see this record as your debut, in a way? As the first ‘real’ record? As a statement, maybe?
Michel Nyarwaya: Mmmh, yes I think we can say that. The process was really thoughtful this time and we had early the feeling that record will be kinda a momentum of this period of our life. It sounds more “mature” I think.
Eve Decampo: Baby Boom is our third release and, for me, each release is a statement. A complete object that exists in the world. But maybe Baby Boom is writing a more complex story than the previous ones. This album is harder to understand.
Is this a home recording?
Eve: This album was recorded during a transition between two places. The “Chaleteau”, where we composed all our pieces since the beginning of this project. And the “Maison Astrale”, a new place where Capelo finds its place now since the Chaleteau disappeared. Some of the tracks were recorded during the last moments at the “Chaleteau” and we had the desire, for the first time, to capture sounds of this place before its disappearance. That made the track “Donjon” on the B side. The labels on the disc are two photos taken at Chaleteau.
Does making a full album demand a different kind of concentration than a 7” or a tape? Do you have other expectations, wishes or demands? Like… does it have to be coherent and have at the same time   variations? Does it have to to have a story?
Michel: I think we really felt the need to do something different. We took a step back to think about what “story” we want to tell and what it meant.
Eve: For this release, it is probably the first time that we asked ourselves the question of what we want to give as a general atmosphere, as a dominant color. For my part, I thought a lot about the sylvan atmosphere at night and in the evening. With Michel, we wanted to create pieces that were allowed to settle, which took longer to clear. We took more time to rethink our tracks, sometimes reinventing them in a chosen direction. I think of ‘Fantôme Vert’ which has become, over the versions, more and more mischievous. The funniest thing was to find out how our different songs responded to each other while listening to the whole album. What side A invites us to see and what side B tells us next.
How do you feel Capelo evolved?
Eve: Not having sufficient perspective, it is difficult for me to answer this question. I will try anyway. We learned a lot from a technical point of view. At the level of composition, it seems to me that we venture more out of our comfort zones. For the rest, I think that more and more texture will embellish our music.
What do you have in common? And what are the differences between you two?
Michel: I can’t really name them but we are very different. The thing in common, to me, is being just open minded with each other and trust each other.
Eve: We both love cinema and video art very much and have a common sensibility for many things. One day Michel said that we were doing “pop de chambre” (bedroom pop) and that brought us together around a musical genre that he created by naming it. It happened that we named the music that influenced us “pop de chambre”, this music reminded us of what defines for us the project which is Capelo.
You both come from a visual art background, so how did you get into music?
Michel: Actually we were into music early on in our life. Eve’s father is a musician, she learned guitar really early. I learned music as a kid too.
Eve: I learned music theory and classical guitar when I was 7 to 14 years. After that I was not very assiduous so I stopped classes. I continued to compose small tunes in my room keeping this desire to make a group for a very long time. The musical encounter with Michel was obvious and things were set up very quickly. Finally, we met thanks to the visual arts! 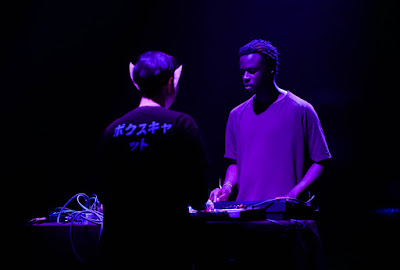 Photo by Lyse Ishimwe
Which role does music play in your daily life? Do you listen to music daily? Do you play music daily?
Eve: Yes, every day, as often as possible. Since a very short time, I have been trying to enjoy the sound of my environment. I do not listen to music anymore when I walk in the street and I am more interested in my environment’s sound. But I still often need to listen to music that draws an analogy with my moods, so I do not feel alone in some feelings of distress. I sing almost every day but I do not play an instrument every day. Often in my life, music is a reassuring character.
Michel: I think I can say that I’m more into music than visual arts actually. That means so much to me. I listen to a lot of music everyday. Lately I was really into 70’s psychedelic folk and early 20th century classical music.