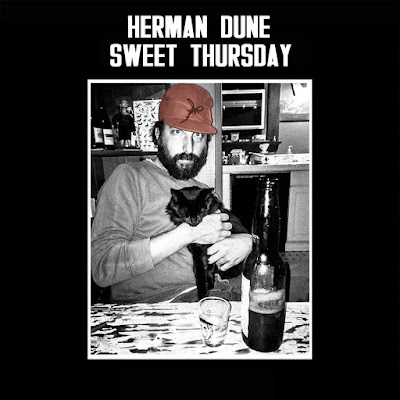 Sweet Thursday: The New Herman Dune (Video Premiere in This Article!)
David-Ivar Herman Düne is a French/Swedish citizen who began playing anti-folk in Paris at a time when no DIY scene existed, let alone any songs performed in English. With the release of 2018’s Sweet Thursday, David-Ivar is back in the driver’s seat of the musical undertaking bearing his surname, following the dissolution of Herman Düne mark one after sacrificing any profit from the aborted production Chasing Bonnie and Clyde. I first spoke with David-Ivar last just after this unfortunate turn, and he was generous enough to release the entire soundtrack free online as a gift to the world and a nice way of washing his hands of that mishap, also releasing a collection called Black Yaya that was hard to find in the U.S., some samples of which are available on YouTube. “This time I’m doing everything myself,” he says. “It’s hard, but worth it.”
Taking care of everything includes the conceptual design and production of videos—like “Joanna” premiering here for the first time, starring David-Ivar addressing a bunch of empty chairs in a professorial rendition of this universal love song everybody feels, punctuated with whimsical tweaks of a prop harmonium (is that what it is?) in time with a repeated instrumental groove, deep down and matter of fact like a smooth-toned logical equation: “I’m calling upon you. Call upon me too.” Smooth and soulful, that one, unlike the endearingly raucous “Down By the Jacaranda” or “A Giant’s Dream,” which is a great metaphor for feeling like a cog in an oversized scheme—or maybe that’s not what he meant, or maybe he means Trump, this oversized, unmindful baby in charge of too much—then I saw an ad for Malcolm Gladwell’s course reinterpreting David vs, Goliath as a fable on a rare form of giantism causing blindness… That’s the power of the lyrics throughout Sweet Thursday, their ability to suggest so much in a few clear words.
Like in “Early Morning Anderson Blues,” where it says, “I never wrote a lyric in the holy tongue,” and it might be that language every writer longs to speak and singer sing, what keeps them going, undying dream of leaving strange designs on other people’s minds. Or “Vincent Thomas Blues,” where he sings, “Sometimes I exi(s)t, sometimes I disappear/in the town of San Pedro. with K.D.M. in my ear . . .” At first, I heard that one as “cadmium,” a minor component in most zinc ores and is a byproduct of zinc production, “in my air,” thinking, “Maybe there’s a lot of that in San Pedro,” then, no maybe it’s a local station, call letters, Krazy KDM.FM or something, but “K.D.M. is Kyle Duncan McNeill, who plays bass and sings in my band, I knew him as a songwriter before we even played together. And literally we sing so often together that he’s often IN MY EARS…” These are both great blues songs, in a transplanted Euro-American meta-blues way.
The genre known today as anti-folk was either founded by Lach or Cindy Lee Berryhill a few decades back, following an open mic dispute concerning punk and folk (or that’s the legend), and has given voice over the years to distinct, talented artists such as Jeffrey Lewis, Diane Cluck, Hamell on Trial, Kimya Dawson, and scores of others. Usually found in the ROCK section most record stores. In 2001 David Ivar started the MOFO music festival in Paris which featured acts like Daniel Johnston, Bonnie Prince Billy, The Silver Jews, Dinosaur Jr., and The Moldy Peaches, and continues to be well loved within that scene. “I always follow and collect the songs of David Herman Düne … from lo-fi home recordings to studio productions!” raves stateside anti-folkist Jeffrey ‘Lightning’ Lewis, whose own Metropolis was one of 2015’s greatest “He continually provides me with the very best example of what a songwriter should be, with charm and bravery and tremendous heart.”
Sweet Thursday shares a title with a novel by John Steinbeck, third in his Cannery Row Trilogy, set just down the coast in Monterey, and it is very much an album of its times. “I’m a big Steinbeck fan, and To A God Unknown was to me the book I needed to read when I definitely moved to California. After leaving France in all kinds of clashes and hurries, I felt that in my new home San Pedro, California, I had found my own Cannery Row. This working-class harbor has a lot that reminds me of the Monterey Cannery Row of his trilogy. I think about it all the time. My neighborhood here is mostly people working on the harbor, who speak Spanish a lot, and so are the characters of Cannery Row. And in general, his descriptions of humans fits my own perceptions. I love his mix of simplicity and spirituality. I mean… I think about the trilogy a lot… The Cannery Row people drink a lot, love and support each other independently of origins, gender or whatever, and often they don’t have a penny to their name, which is very relaxing when you live in America and money is so important to a lot of people . . . I moved to Santa Cruz Street, by the harbor, where life starts at 4AM . . . Now an Immigrant in California, I set up a studio in my back yard; I gave up my phone, stopped touring and started working intensely on music and art. I also drove around the South Bay in my 1992 Toyota with its old cassette deck. Most songs on ‘Sweet Thursday’ are inspired by this new life, and the doubts and fears of being an alien resident in the shift of the U.S. during this current administration.” 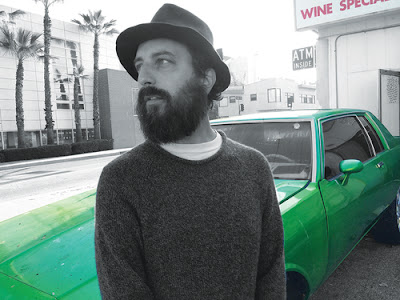 David-Ivar has also been recognized as a visual artist and his work has been seen in Playboy, Flaunt, and Spray magazines. His art has been shown at the FIAC in Paris, Art Basel in Miami, Triennale in Milano. He’s had multiple exhibitions in galleries in Paris (Nivet-Carzon, Agnes B), New York City (Cinders Gallery), Los Angeles (Small World Books), and institutions and galleries in Europe. He holds a record for tracking 10 John Peel Sessions with the mythical British DJ. Be it anti-folk or rock and roll or punk-folk-ism, Sweet Thursday is another installment in a lineage of creativity incorporating and surpassing all such technicalities, exemplifying the inevitable growth under pressure resulting currently and/or forthcoming from creative artists of every stripe in the current tight squeeze of a zeitgeist, and as such received a jolt of inspiration from a precursor at the critical moment ensuring completion: “At a recent show of Mike Watt & The Missing Men in a warehouse on the docks near my house, Mike shouted out to the audience, ‘Release your own stuff! Put out your own music!’. I felt like the King of the San Pedro Punk Scene was pointing at me to inspire me in my process of going back to doing things myself, my own label, my own everything! The album has strong visual themes to me and I decided to work with video artist Brett Sullivan of the NYC anti-folk band American Anymen to help realize music videos for the entire album. I really dug his editing style in connection to music, so when he came up with the idea of a video campaign for ‘Sweet Thursday’ [that was] almost a movie, I really jumped on the idea and we got to work filming music videos about San Pedro that inspired the album so much.”
The full album “Sweet Thursday” is set to be released on MAY 17th. Now premiering the VIDEO for “Joanna” from Sweet Thursday by Herman Düne. Enjoy!
– Zack Kopp
© Copyright http://www.psychedelicbabymag.com/2018
Herman DunePremieresReviewsZack Kopp