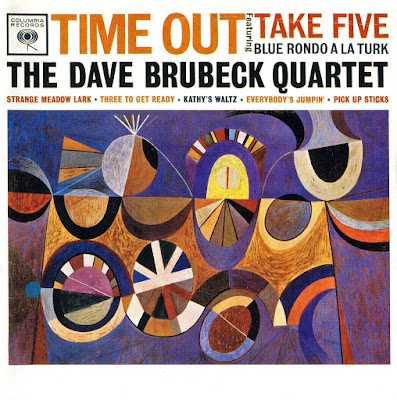 Without a doubt Time Out, with one of the most beautiful album covers of all time, is among the most subtle and signature releases by Dave Brubeck, where the Quartet float in a cool smooth blend of West Coast jazz that stands out for several reasons. The first being that it does not rivet the listener in place, but more gives the listener a space in which to allow the music to encompass them. The second is that the album features Brubeck and his players adding their own touches to what would be considered traditional sounds, ebbing out what was important within that construct and moving it forward, where with their non-common time signatures, they deliver something the world had never experienced before.
Perhaps most interesting to note, is that the song “Kathy’s Waltz,” named in honor of Brubeck’s daughter, and misspelled, was the inspiration for the 1963 single “All My Loving” by The Beatles, where Brubeck’s attitudes and enunciations filter in and out of the number. Oddly enough, others point to Lennon’s guitar work being much like that of Chet Atkins, but even so, with Lennon’s constant use of triplets, “All My Loving” dances right back to what Dave Brubeck was doing a number of years earlier.
The album was just so popular, that like the early Beatles material, it became so familiar that eventually listeners often weren’t hearing what was going on, a fate that plagued Miles Davis with his outing Kind Of Blue. Nevertheless, there’s little to argue about, it’s a timeless album that people need to find themselves along with more often, searching out its intricacies, intimacies, hidden notes, and sparkling presentation. In many ways Time Out is very fragile, especially when one considers Brubeck’s use of tonalities usually relegated to blues recordings, and his ability to not only swing, but to harmonize, and it’s this harmonization that set this album into a class of its own.
The details of Brubeck’s sound would go like this … it wasn’t until the late 1950’s that Dave came up with the notion of changing the 4/4 time signature (known as the ‘common time signature’) to that of 5/4, which opened up all of the windows, and while we may take this for granted today, it was a breath of fresh air in 1959. What most people missed is that the rest of the band, essentially the rhythm section was still swinging in the 4/4 signature, though jumping out enough to add accents, where this would allow the music to sound fresh and new, yet still with a recognizable and unmistakable undercurrent. That being said, the fragile-ness of this collection is derived from a sense of hesitation, where the band seems to be forever exploring not only each other, but the music in general, not with a sense of uncertainty but with the idea that they are keenly aware that they are doing something extraordinary, and are finding their way in the midst of creation, defying traditions, establishing new boundaries, and creating a body of work that still sounds revolutionary today.
*** There is a 2016 UK import reissue from Green Corner Records of the album pressed to two 180 gram vinyl albums, with the first being the original mono production, and the second record being the stereo mix. Both are delightfully intoxicating, and both versions bring something new to your ears. It’s almost elementally necessary to hear this work on vinyl, and if you wish to avoid shelling out $50 or more for a vintage copy, which, let’s face it, will have surface noise, then this is certainly the way to go, and is very reasonably priced.
– Jenell Kesler
© Copyright http://www.psychedelicbabymag.com/2018
Jazz CornerJenell KeslerReviewsThe Dave Brubeck Quartet