“Fire & Glass” is part two of the Stray saga, presented by Cherry Red Records, UK, a follow up to the 2017 four disc box set “All In Your Mind: The Transatlantic Yeas 1970-1974”, a four disc box set, which was reviewed a couple of weeks ago.

This two disc, thirty five track set compiles all of the band’s recordings released by Pye Records on their Dawn imprint, home to Mungo Jerry and many other artists. Thus, “Fire & Glass” contains three LPs, a single edit, a non-LP b-side and two previously unreleased album outtakes, nearly two and a half hours of prime time rock and roll.

Lead vocalist Steve Gadd, who sang on all five of Stray’s Transatlantic Records releases, exited the band during the recording sessions for “Stand Up And Be Counted” leading to the addition of a second guitarist, Pete Dyer, who plays and sings on all the tracks found here. “Fire & Glass” includes the work of Dyer, with he and lead guitarist/keyboardist/songwriter Del Bromham handling all the vocals, Bromham becoming the group’s chief songwriter, a role he previously shared with the now departed Gadd. The addition of Dyer’s rhythm guitarist helped fill out Stray’s sound musically, and he and Bromham’s vocals arguably were an improvement over those of Gadd.

“Fire & Glass” opens with the ten band originals from the 1975 “Stand Up And Be Counted” LP. From the opening tune, the album’s title track, it is obvious that the band’s sound had evolved, resulting in lots of heavy, guitar driven rock, mixed with mellower, more accessible and commercial material. All of the LP’s tracks are band originals, all but one penned by Bromham. Ironically, the one tune credited to all the members, “For The People” is, for my money, the strongest track of “Stand Up” and marshals a return to the band’s heavy rock beginnings, Bromham’s guitar solo being the five and a half song’s high water mark. “Precious Love” is a three minute, forty second heavy rocker, with Bromham’s slide guitar prominent, an excellent choice for single release. Sadly, as was the fate of all Stray singles, the tune failed to climb the charts, a huge letdown for the band. It did not, however, discourage the quartet from recording further incredible rock for the remainder of their Pye/Dawn years. Another single from the album “Smile” c/w the LP’s title track is yet another example of Stray’s ability to deliver high energy rock filled with beautiful melodies, unfortunately never finding commercial success. The album is filled with Bromham’s amazing command of the wah wah pedal on tracks like “Every Day Of My Life” and the LP’s closing track “The End” as well as slide guitar on “Woolie.” “Stand Up And Count” is full of tracks reflecting the filled out sound of Stray, thanks to the addition of Dyer’s second guitar and the gorgeous vocal harmonies of Bromham and Dyer. Next up, “Recover” the non-LP b-side of “Precious Love” has gorgeous vocals and swirling wah wah guitar by Bromham throughout.

Disc one’s final tracks and the first five of disc two contain the band’s second Pye/Dawn LP “Houdini.” The album’s opening track “Feels Like I’ve Been Here Before” is a heavy rocker with Bromham’s guitar roaring and features beautiful echoed lead vocals. Bromham takes more than one break in this four and a half minute stomper. Heavier than its predecessor, “Houdini” is filled with Bromham’s lead guitar, supplemented nicely by Dyer’s rhythm playing. The album’s title track is an excellent example, filled with heavy riffs and lots of wah wah work by Bromham. Despite its driving beat and Bromham’s roaring lead guitar the tune is pure accessible rock and roll with more than a little commercial appeal. “Wait Another Day” has a Steely Dan feel, with luscious lead vocals, gorgeous harmony vocals and reverb laden guitars. The set’s title track, included on “Houdini” features a building beat, and wah wah guitar nicely distorted and full of fuzz. Bromham’s gentle slide guitar and gorgeous vocals bring George Harrison’s “All Things Must Pass” to mind immediately. Likewise Bromham’s slide, sounding incredibly like Joe Walsh dominates “Gonna Have A Party.” “Houdini” rocks from beginning to end, hailing back to the earlier recordings done for Transatlantic Records, yet there are mellower moments such as the acoustic and keyboard driven “Didn’t We Love” on which each and every note is crystal clear and ever so smooth.

The single edit of “Take It Easy” filled with gorgeous guitars and vocals segues into the band’s third and final Pye/Dawn LP “Hands Of Fire,” a December, 1976 release and the band’s swansong in its initial lifespan. Opening with an outtake from the sessions, the distorted, slide guitar rocker “Paramount” is presented in instrumental form and works perfectly, the guitars of Bromham and Dyer intermingling ever so pleasantly. The group’s final album, produced by noted blues man Neil Slaven, best known for his work with Trapeze and various artists on the Blue Horizon label is a return to the band’s early blues rock days. The album’s opening track “Buying Time” features a building beat, ending in a howling wah wah laden solo. The band ventures into more gentle blues rock on “Knocking At Your Door” which would have been a wonderful single had the label chosen to release it as such. Perhaps the album’s best track is the heavy blues rocker “Mister Wind” with its climbing beat and thundering guitars and rhythm section. “Live Wire” features a heavy guitar groove countered by lovely vocal harmonies and most impressive time changes. Bromham and Dyer’s guitars are once again perfectly mated on the heavy rocking “Take A Life.” The gentler “Lonely Road” is pleasantly accessible while containing more guitar pyrotechnics by Bromham. The restrained, nearly balladish “Lady” leads to the album closing, six minute plus “One Night In Texas” with its unique bass intro, the rhythm section tightly locked into place before Bromham’s guitar revs up and leads the tune and album to its heavy rocking conclusion. Disc two, and the set close with the “Hands Of Fire” outtake “Johnny” featuring a melodic guitar intro and a bouncing beat, with the guitars nicely restrained. Presented here in instrumental form, the tune would have fit perfectly on “Hands Of Fire,” its gorgeous melody and relaxed feel fitting Stray nicely. The tune is a wonderful closer to a most pleasant anthology of the hard rocking Stray. 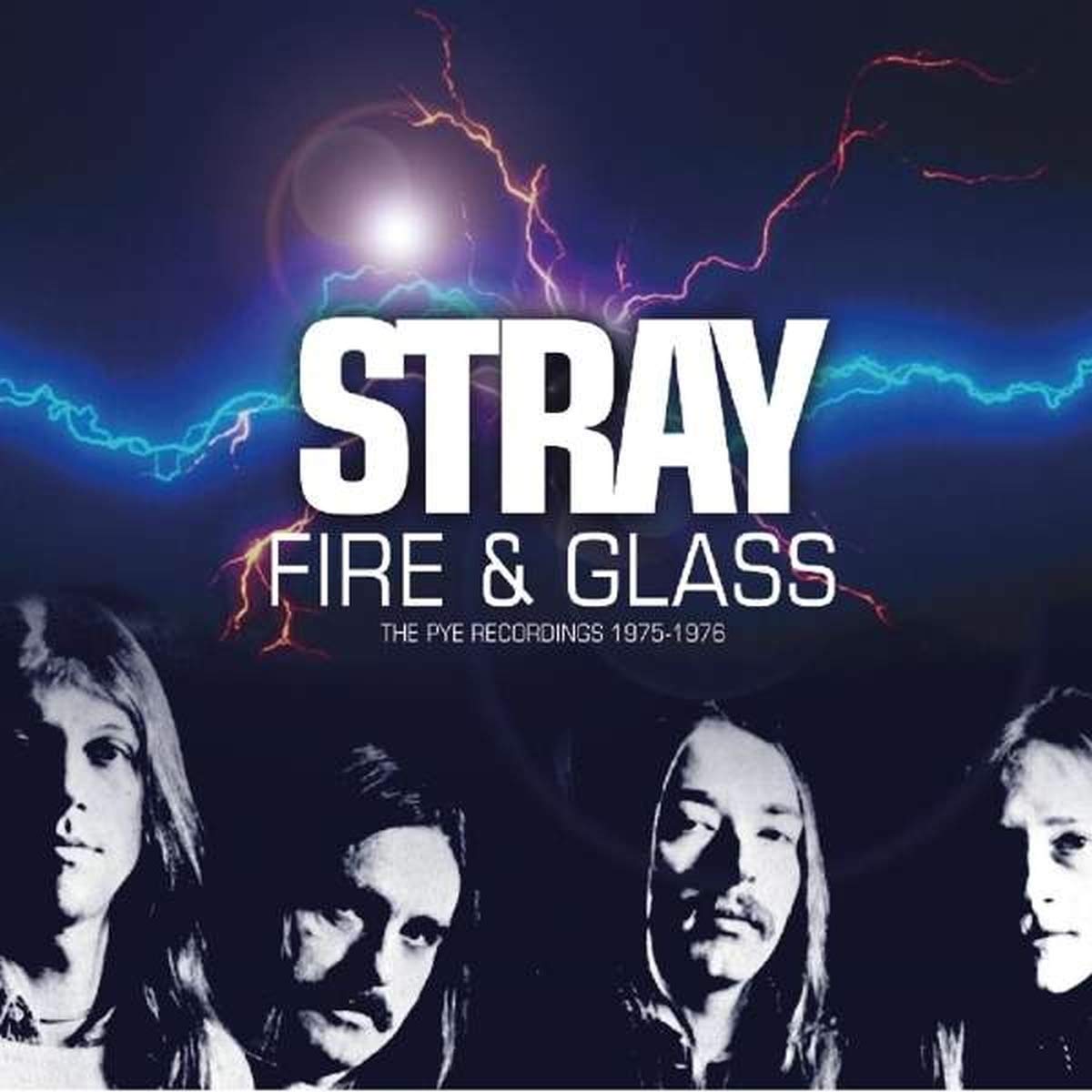 “Fire And Glass” contains nearly two and a half hours of music, newly remastered and sounding crisp and clean. The 16-page full color booklet contains full track annotations, an informative essay by Malcolm Dome, as well as photos of the band, posters, press clippings, and LP and single artwork. Conceived and compiled by Mark and Vicky Powell for Cherry Red Records’ Esoteric Recordings imprint “Fire And Glass” contains every recording by Stray for Pye Records’ Dawn imprint, and as such serves as the perfect companion to “All In Your Mind: The Transatlantic Years 1970-1974” and is absolutely the final word on the second phase of Stray’s original lifetime 1970-1976.