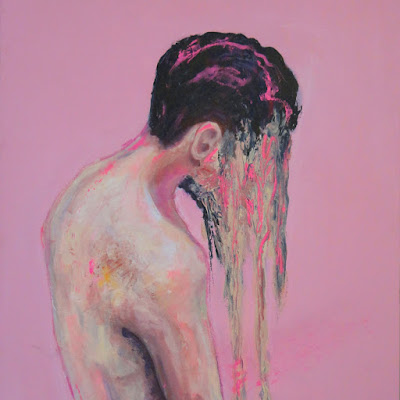 Dawkins – Ep1 (Self-released, 2017)
https://ddaawwkkiinnss.bandcamp.com
Three musicians with an assemblage of
trans-Atlantic correspondences have skated into our frame of view
with a genre-bending novelty that can only be compared to the titans of ambient
psychedelia. Dawkins is assuming their own center of gravity—with a smidgen of
adorable humility, of course.

“We’ve been told not to say Radiohead is an influence, but we fucking love Radiohead,” Will Guerry, the group’s songwriter and producer, said in an interview with Bandcamp Daily.
With a hodgepodge of
high school collaborations woven into their musical development, this trio of
college-aged creatives have commanded the attention of Washington, DC’s DIY
music scene, their original stomping grounds. Growing up in a suburb just
outside the city, the three of them were constantly creating, recording, and
performing both inside and outside school. Now, with a barrage of instruments, a
working familiarity with production, and the finesse to develop their sound
together virtually, a well-polished EP has emerged from the woodwork. With one
member in Denver, one in Nashville, and one in London the achievement seems
supernatural. Aptly titled “Ep1,” the release seems to allude to the group’s
indubitably prolific future.
And yet despite the project’s genesis,
there’s no hint of any sophomoric bedroom pop. With so many of their peers
producing violently pompous Garageband minimalism with an attempt at a
seductive Alex G or Girlpool impersonation, they couldn’t be more refreshing. Spanning
just 5 songs, the EP has a production quality paralleling Flying Lotus, but with
a larger instrumental repertoire. Its atmosphere flows like a lulling river,
doing most of the work for you—but you haven’t stopped treading water quite yet.
For this effect, the group has chosen the descriptor “splatter-pop.”
The record opens with “Terrace,” which
drops you into a kind of hallucinatory sludge. You feel a pull towards
instrumental hip-hop. Something along the lines of Blockhead. But the opioid
vocals pour across the track like spilled soda crawling across the tiled bathroom
floor—the group’s self-classification begins to reveal itself. A fleet of
synths coat you in a sticky film. The tempo has been squashed and regurgitated.
Not-quite-subliminal voices peak their way into the collage. Then radio static.
Then actual liquid dripping. The vocals offer a kaleidoscopic anxiety,
mimicking the trepidation and buzz of losing oneself to an experience. And yet
there’s an affinity for the familiar thrust of a drum kit, and the sweet legato
of a bassline in a fleeting moment that pieces it all together.
I find it hard to not to name drop Panda
Bear in describing the next track, “Peaches.” A crescendo of bubbles leads to a
reverberating holler. Vocals glide and intersect high above your head. Entire
verses pass by, almost unnoticed, as your hands go limp in the sunshiny grass.
Percussion is present, but bleeds seamlessly into the obscurity. It has that
emblematic motif of synth-based microsounds that are all too irresistible. With
5 seconds left, almost everything sinks below the surface, leaving a
consolingly childish cough of aimlessness.
“At Intermission” poses a new direction. First,
literal crickets. Then, a cascade of sustained piano atop the fuzzed
conversation of primordial amoebas. The unbridled acoustic pangs expand the EP
to a newfound and eclectic swagger. While its guise indicates it serves as the
release’s intermezzo, I’m eager to hear this uncanny yet ethereal territory
explored further. But the eukaryotes recede into the periphery with “Kiwi,” a
simpler dream pop number. Atonal samples scintillate in front of us as an
electric guitar arpeggiates beneath its web of effect pedals. Once again, the
vocals reinvent themselves. While remaining narcotic, a male voice embodies a
sluggish pathos. Distant choirs echo as the chorus mounts. The entropy that then
takes hold both captivates and condoles.
But as “Bad Faith” concludes the release, I
feel we’re let off a little too easily. Aside from a sinister bass grooving
deep into your head for about 90 seconds, there’s little to distinguish this
from the previous adventures. It’s almost too similar. The good news is, imitating
an already solid EP is no dire mistake. Dawkins is not in utero. Dawkins is
harvesting their vernacular. How indomitable.
-Gabe Kahan
© Copyright http://www.psychedelicbabymag.com/2017
DawkinsGabe KahanReviews