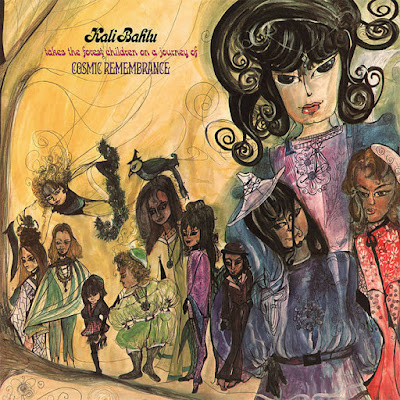 Kali Bahlu – Cosmic Remembrance (Merlin’s Nose Records, 1967/2017)
Listen: https://merlinsnoserecords.bandcamp.com/album/cosmic-remembrance
First official reissue ever! Includes two bonus tracks and extended linernotes! Gatefold Sleeve. It’s 1967 and Kali Bahlu felt that it was time to “simply speak the truth as it comes to me from the other side”. Her believes that we’re all tapped in a cosmic game, and her overall adorable wisdomly folly that she preserved into her old days, could lead to the assumption that she’s been the grandmother of characters like Luna Lovegood.
The record features four narrations performed by Kali with a bright and sometimes piercing voice in which she unveils her visions to the listener. What awaits you here ain’t exactly the typical flower pop with colourful harmonies. This is an entirely different affair. She speaks, screams, laughs and sings with that lovely lunatic expression in her voice on a base of droning music that is a combination of classic Indian raga with sitar and tabla and a few other eruptive sound-creating instruments. The result is really a mystifying atmosphere. The music and narrations drag you into a colourful world of strange plants and creatures. They tell you enchanted stories of Leprechauns, Fairys, Witches, Lemurian Kings, Angels, and “the Northwind (that) got stoned of marijuana….”. Be invited and come along on a journey of Cosmic Remembrance!
– ‘Sir Lord Doom’
© Copyright http://www.psychedelicbabymag.com/2017
'Sir Lord Doom'Kali BahluReviews