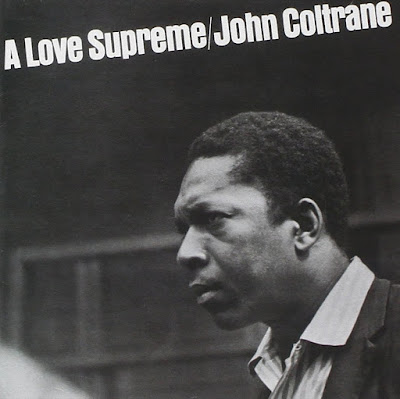 A Love Supreme is a very special album, even in the large scope of John Coltrane’s work. Bearing resemblance with the post-bop style of its time, it is nonetheless absolutely innovative, without ever going to full-on free jazz territory. It is most of all the work of an enlightened mind, who, after years of confusion, finally finds peace of mind and discovers the power of the Universal oneness, Tat Tvam Asi, the Love Supreme.

It starts with an almost classic jazz beat, not furious nor trancelike, but very contained and transpiring serenity and tranquillity. Coltrane offers unique modal improvisation on the sax, while the piano sounds like an undefined and underlying stream of an endless river source. The 3-note theme of “Acknowledgement” is repeated in every possible way and tonality, like a short mantra used to liberate the spirit of the attendees and listeners. It is then used back again as a chant, which adds to the image of a religious mass.
The mood builds up during the first three parts, the tempo slowly rising, and always bearing the same atmosphere of spiritual strangeness, like a mysterious temple in the mountains inhabited by silent zealots. The musicians all outdo themselves through their solos, but the music still doesn’t seem to have a lot to do with its performers. The higher power is definitely the conductor here.
After the progressive build-up of the first three parts, “Acknowledgement”, “Resolution” and “Pursuance”, the band leaves us with a beautiful, tragic and reflective ending, namely “Psalm”. It sounds like the first Christians finding out about Jesus’ execution and having to hide from the Romans, all the while knowing Jesus will come back.
A Love Supreme is definitely a groundbreaking album, and one of the most important in John Coltrane’s discography. It sounds more like the devotion of a solitary monk than the fury of the entranced black evangelists that we can hear on other spiritual jazz albums. It delivers a message of peace, spirituality and universality, that is exceptionally inspiring and should be heard by the psychedelic listener, as it has some substance in common with the more enlightened works of 1960s and 1970s psychedelic bands.
– Gustav Janko
© Copyright http://www.psychedelicbabymag.com/2017
Gustav JankoJazz CornerJohn ColtraneReviews