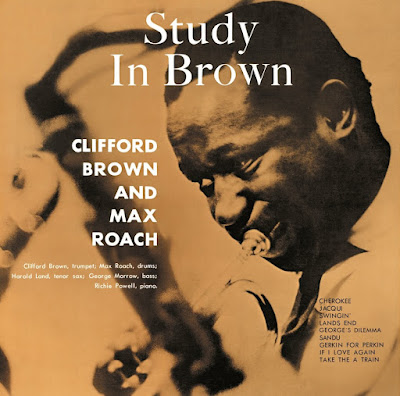 With many of the original tracks, by differing members of the band, such as “Lands End,” “Sandu” and “Cherokee,” going on to become jazz standards, it’s no wonder that Study In Brown holds a near and dear place in the hearts of jazz fans across the world. In 1955, jazz was just hitting its stride, musical technology was also at its apex, and with a gathering of players such as Clifford Brown on trumpet, Harold Land laying down tenor saxophone, Richie Powell sparkling the piano, George Marrow on double bass, and the legendary Max Roach holding down the backbeat, there’s not a person walking the face of this earth who didn’t know something special had been captured on this bit of wax … and all that was gleamed simply by embracing the album jacket.

This was one of the first jazz albums that reached out and grabbed me back in the very early 60’s, and came at a time when my Uncle thought that I was responsible enough to have a key to his house. With that key came the privilege, with a rather lengthy set of instructions, for using his component stereo, much of which he’d built himself. Sure, The Beatles had released an album that was sweeping the States, but I was digging deeper into this collection, as he had a shelf full of albums he called both ‘race music’, meaning black, and another shelf that contained nothing but jazz and blues. Being a white kid from the suburbs, these albums were laced with images and sounds I’d never heard before, from artists who seemed old for their age, proud images of men and women who had undertaken to step off the beaten path, finding some kindred spirits and cut their own swath across the landscape of America.
Every time I listened to Study In Brown I discovered something new, something articulated in a manner I’d not hear before, something fragile in the midst of so much inspiration. Add that to the fact that my Uncle Bee actually had a primitive equalizer, and I would spend hours fleshing out the sound, heightening the bass, adjust the treble, and punching the mid-range, all of which changed and challenged the dynamic aspects, allowing me to hear individual members of the band with clarity and nuance. I came back to this album time and time again, never able to give voice to my feelings, as if there were a language that was alluding me. Nevertheless, for all the freedom, brightness and spontaneity of this release, the notes didn’t filter off into the ether, things were glued together, the music had actual weight, power and endurance.
Today I understand that perhaps for the first time in history, Clifford Brown and Max Roach and coaxed a bit of what we now call funkiness into being, that this music had a clarity and purpose for being, that the bar was set amazingly high, and Clifford and his band exceeded that bar, exceeded their own visions, creating a timeless album for all time, creating a moment in time when the history of jazz was forever changed. This isn’t the ‘Hard Bop’ Clifford made famous, this is just a classy no nonsense album that hit the mark.
It was also the first time in my life that I wanted to steal anything, to take this record home and conjure its hidden side … but I never did, I just played it to death laying in the warm afternoon sun on an angular sofa, surrounded by Heywood Wakefield furniture, in a late 50’s mid century modern house.
– Jenell Kesler
© Copyright http://www.psychedelicbabymag.com/2016
Clifford BrownJazz CornerMax RoachReviews