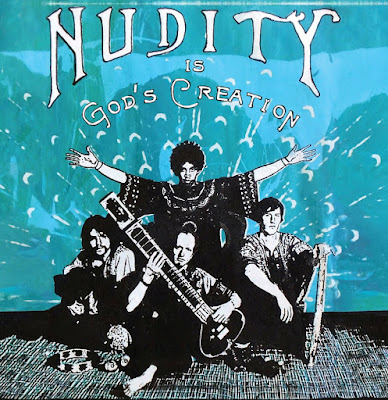 Nudity – Is God’s Creation (Cardinal Fuzz, 2016)
Like Black Sabbath crossed with Motorhead, Nudity strip all the flotsam and jetsam out of the way and head full on into insane, firecracking speed metalica territory on ‘Now I’m Resting’, the opening skronker from this compilation of headbanging lunacy original conceived and memorialised between 2005-2010. It’s more balls to the walls muthafucka when ‘This Man’ goes for the jugular with razor blades and buzzsaw guitars akimbo. Just take a deep breath and let the power wash over you.

Garage sludge like this doesn’t come along too often these days, which may explain why this may sound a little dated (the tracks are a decade old), but garage nogoodniks and air guitar naysayers will want to build their collection of uncompromising rawk n roll with this retrospective killer.
On the other hand, there’s a fist…full of mind expanding drones and acid fried goodies like ‘Birdsong’, which squeezes all kinds of other worldly sounds and space excavations into its 10-minute allotment, and who doesn’t love another chance to drool along to Hawkwind’s ‘Hurry On Sundown’, captured in all its shambolic glory.
‘Rubicon’ shows off their bluesy chops, with wah-wahs, buzzing guitars, and a galloping drumbeat that keeps that train a rollin’ on down the tracks. ‘Make-Up’ sets aside 12 ½ minutes for some boss soloing from all involved, and the whole enchilada wraps up with the sidelong (as in 21-minute) ‘Le Premiere Voyage Du Capitaine’, which tosses headswirling sitars into the fray just to see if you’re still awake and relaxed and paying attention. More bongloads of righteous boo from those cardinals of fuzz.
– Jeff Penczak
© Copyright http://www.psychedelicbabymag.com/2016
Jeff PenczakNudityReviews