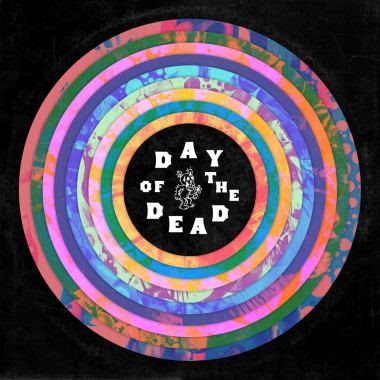 Various Artists – Day of the Dead (4AD Records, 2016)
These epic compilations, and usually for a good cause, have always managed to stumble me, often leaving me to feel that by reviewing something of this nature, that I would be less than noble by leaving people to feel that the endeavor is hardly musically worthwhile.
Certainly the Grateful Dead in all of its incarnations has left us with a staggering catalog of music, and like all artists, often times hearing another musician’s take on a song might spark a light, bring back some long forgotten memories, and perhaps bring some fresh vibes to the table. Though having said all of this, there seems to be but a few artists on the outing who actually fit the nature and theme of The Grateful Dead … in that they’ve nothing in common with the late 60’s and early 70’s mind-bending psychedelic alternative country weirdness that spawned a movement that lives on to this very day. Most of these artists, try as they might, merely see these songs as bits of broken mirrors that they can neither piece together, nor fully understand the nature of what these songs reflect.
Major exceptions of course are “Touch Of Grey” by War On Drugs, “Box Of Rain” by Kurt Vile, “Goin’ Down The Road Feeling Bad” by Lucinda Williams. These artists, along with the other twelve tracks that I’ve kept, have managed to not only make the songs their own, but have managed to find the heart and soul of the numbers they’ve chosen to cover. Most of the other artists, while presenting a good rendition, just don’t own what they’re doing. Most of these songs will not give you respect for The Dead, they only showcase the artist who’s presenting, leaving me to feel that many of the songs by the nature of their presentation ended up not being even faithful variations of Grateful Dead music. All and all, there is not a cohesive flow, no contextual point of reference, no emersion that guides you down the rabbit hole and out the other side a changed person.
*** The production and sound are outstanding, creating a full rich dense body of sound. Don’t miss “Touch of Grey,” “Sugaree,” “Candyman,” “Cassidy,” “Box of Rain,” “New Speedway Boogie,” “Friend of the Devil,” “Garcia Counterpoint,” “Morning Dew,” “Goin’ Down the Road Feeling Bad,” “Playing In The Band,” “Ripple,” “Brokedown Palace,” “I Know You Rider,” and “Standing on the Moon.”
Review by Jenell Kesler/2016
© Copyright http://psychedelicbaby.blogspot.com/2016
Grateful DeadJenell KeslerReviews