Mountain Witch appeared in 2011 when their début album Scythe & Dead Horse was released. It was a free bonus to 5th (digital) issue of Doom Metal Front magazine. It was a good instrumental album performed in traditional doom rock way. I’m always curious about albums with artistic covers so burning skull with village on its top attracted my attention and I laid my hands on Mountain Witch latest release Burning Village and was stroke by band’s new image! René Sitte (guitars, vocals), René Roggmann (drums, vocals) and Tobert Knopp (bass) nowadays play groovy heavy rock with proto doom touches! So I’m really glad that René Sitte found some free time to answer my questions about Mountain Witch.

Mountain Witch just released third album “Burning Village”. I remember that Mountain Witch first full-length “Scythe and Dead Horse” was attached as bonus to one of Doom Metal Front magazine issues. How did you get there?

To be honest.. we just asked if they want to have it as a bonus to their magazine and they agreed.

“Scythe and Dead Horse” is an instrumental album, but your latest album “Burning Village” contains vocals. When did you turn away from instrumental music?

Well, “Scythe and Dead Horse” already had some sparse vocals on 2 tracks. The following self titled EP had none. At the time we started working on “Cold River”, we realized that we actually want to write songs and not instrumentals and so we did. You should really give “Cold River“ a listen. There is a good chance you may like it if you think “Burning Village“ is strong.

The album title was chosen long before any proper lyrics were written. We liked the timeless, archetypical imagery it conjures and it seemed to fit all the different song themes pretty well, so we kept it. The artwork is inspired by the Suhrkamp books they’ve put out in the 70s/80s. It’s minimalistic yet very strong. 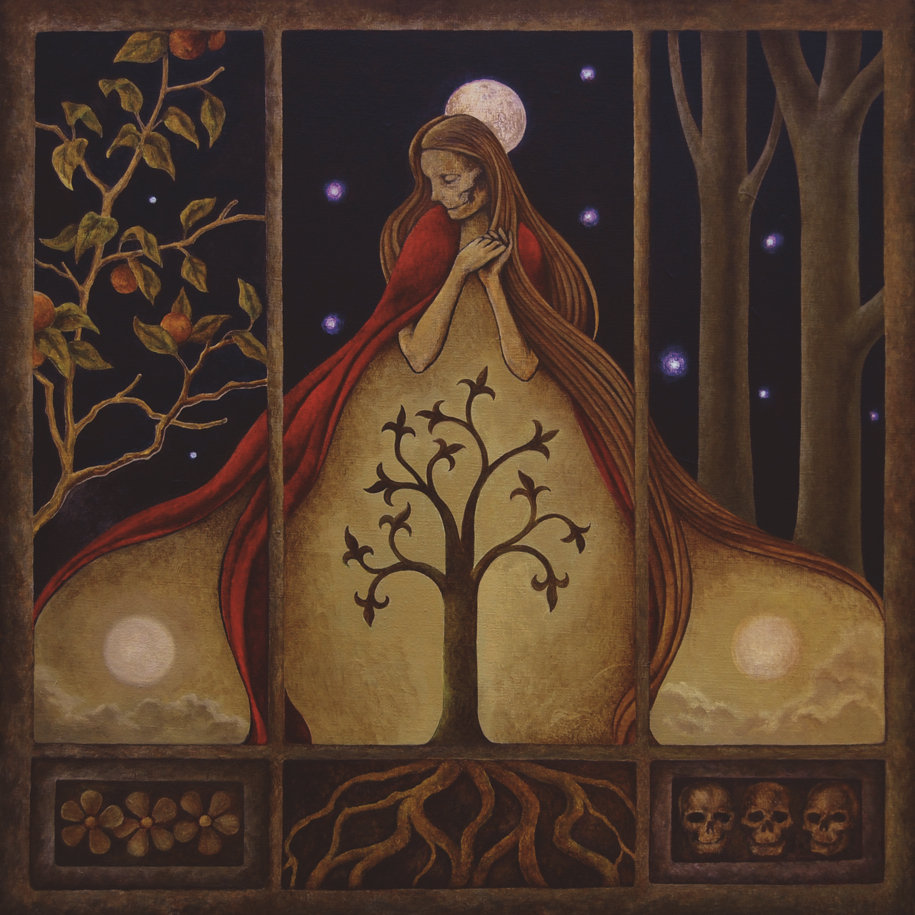 So there’s no cool stories behind it? Nor old school horror movie or conceptual stuff about burnt witches, living dead and ancient curse?

“Burnt witches, living dead and ancient curse”, sure! But there is no overall concept, like just Lovecraft or just war related or whatnot. It’s a collection of songs that have mostly a “weird tales” kinda vibe or setting, but it’s not limited to that.

“Burning Village” was released by This Charming Man Records that previously released “Cold River”. How did you get in touch with the label?

Our bassist knew Chris of This Charming Man from way back and just talked him into it.

The sound, the very vibe of “Burning Village” is something special, and it’s obvious that you worked on Mountain Witch individuality. How did you create that specific sound in the studio?

Hauke Albrecht of Rekorder Studios in Hamburg, the guy who recorded, mixed and mastered “Cold River” and “Burning Village” has lots of cool analogue gear and classic microphones, and he knows his craft! We showed him some references and he hit the nail on the head, its pretty much what we had in mind. We didn’t want the sound to be huge or utterly heavy. We wanted it to be gritty and have the music breath some air. Lots of nowadays music is way to overproduced.

What kind of perspectives do you see now having “Burning Village” at hands? Mountain Witch probably have invitations for one or two big festivals in Europe?

Well first of all I have to say that I think it’s our best and strongest album to date and I’m proud about it. We get invitations from time to time but often we cannot make it for different reasons. We all have jobs and two of us also have kids. But we really enjoy playing live when we can! I hope we will gain some popularity with this album and people dig what we do. That’s all what we want. Play the music we like and put it out to the world. 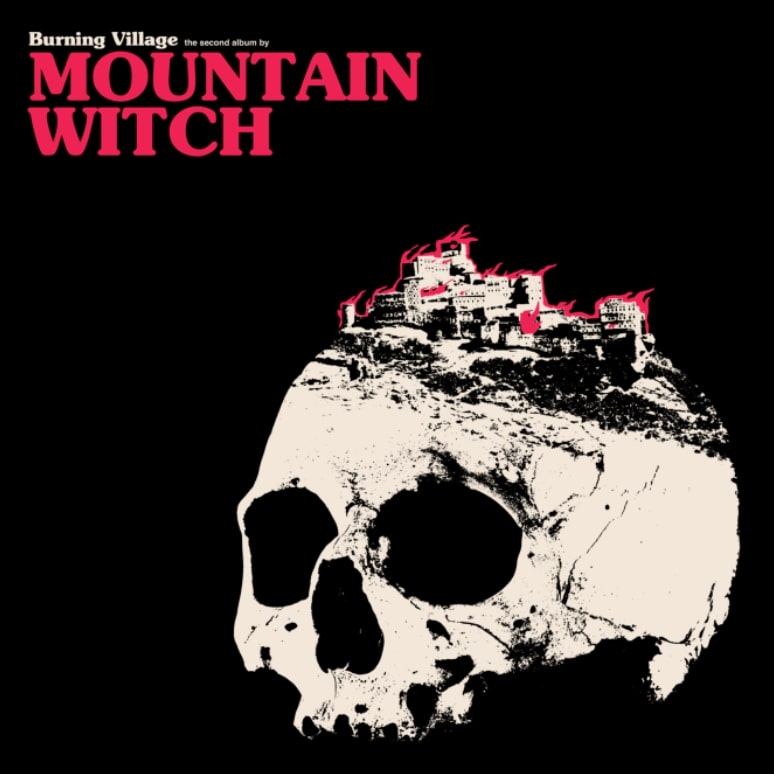 What can you tell us about album making process?

The bulk of the material was composed and put together over the course of 1 year, though some songs were already fleshed out. “Forbidden Forest” song for example is a pretty old, which didn’t fit the ”Cold River“ album to well so we’ve recorded it for the new one.

One of most attractive song’s titles on the album is “Mountains of Madness”. It’s Lovecraft inspired work. Did you put an emphasis onto its unearthly horror atmosphere or just wanted to retell the plot itself?

We did the music first and it had some icy, majestic feel to it. In order to have something to sing along while practising, Roggmann came up with the line “deep in the mountains of madness, the outer reaches of …” and it did fit, so he decided to do a song around the novel.

The lyrics don’t retell the plot though, so no spoilers to be feared. It uses some poetic moments of the original text and own verses to describe the scenery and the struggles of the protagonists.

Was there a special moment when H.P. Lovecraft inspired you?

That was in the bus on tour. Tobert said hey let’s listen to some Lovecraft audio book on from that point I was kind of infected. I knew about him before but never read any story by him or anything else. Sometimes I’m kind of on a bubble.

I know two more great variations on theme of “Mountains of Madness” – one is performed by Gates of Slumber and another one – by Arkham Witch. May you point your favorite Lovecraft-influenced songs?

For Roggmann it’s Metallica ”The Thing That Should Not Be“ and I have to add that I totally hate Metallica, haha. Personally I don’t have a favorite Lovecraft influenced song, but I do have Tolkien inspired albums that I really adore. Bo Hansson – “Lord of the Rings”.

There are promoters and booking agents today who are ready to help bands with spreading their tunes all around the world. Do you use their service or do you promote the band and organize gigs strictly in DIY way?

We know a very good booker who sometimes organizes gigs or small tours for us. Sometimes we are asked directly. Other things like features here and there came through talking to supportive people who like what we do.

Rene, I bet that you know Witch Mountain band from States? Did you ever get it touch with them?

Actually I did not, though they once played here in our home city and I had the idea to go to the concert and give them a shirt of our band as a gift. In the end I did not go and to be honest I don’t enjoy their music at all. But I guess they are nice people… so what.

Ha-ha, such a cool story! Let’s finish the interview with one last question – how would you resume Mountain Witch plans for 2016?

Write new songs and play some concerts. Maybe across the border of Germany as well. Would be cool!

Oh, sorry – one more thing! How did you come up with a name Mountain Witch?

We wanted something that everybody could connect to certain style of music and at the same time a name that is a little bit dumb and simple. We actually got a mountain here in Germany that looks like a sleeping witch. so that is another connection to the name. 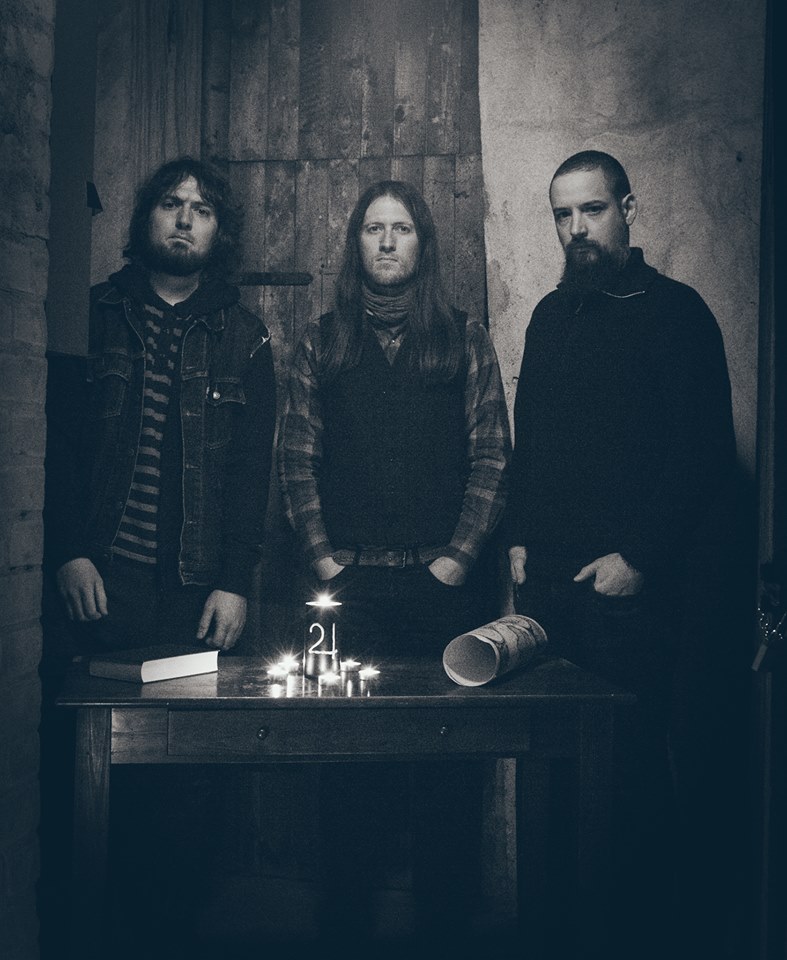 Thank you Rene – that’s all. I thank you for your time, it was nice to know more about the band and just to talk. Good luck mate! Wish you all the best on your way with Mountain Witch!

Thank you for being interested and asking good questions!