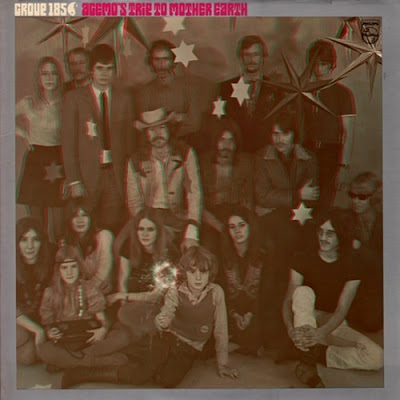 Group 1850 – Agemo’s Trip to Mother Earth (Pseudonym Records reissue, 1968)
Agemo’s Trip To Mother Earth never saw commercial success because there was nothing commercial, or perhaps even sellable for this heady nearly forgotten band … who even in their time, saw but a song or two played late into the night, where on the playground of the mind trippers, they were what was known as a “freak out,” meaning the injection of their songs disrupted the unlimited boundaries of an expanding consciousness, causing the listener to say something to the effect of, “Wooo! Did you hear that? Did I hear that?  Who was that?” While stumbling fingers would attempt to find their place in the rotary dial of the telephone, calling their radio station to make sure all was right in the universe, and to get the name of the band.
Sadly, in the harsh light of day, when wobbly-heads have transformed themselves into sleepy-heads, and are trying to read what they’d written, and failing, they tossed it all off to the effects of the lysergic. Now, there were a few who managed to make out their nocturnal scrawl, got to their local record store, and laid down a couple of bucks, with a mile wide smile inching across their faces, saying to the cashier, “This is mind boggling man, it’s monumental, it’s a gas, it will really make your trip.” Of course the cashier gets a bonus for selling the last copy of this indulgent indescribable album, and all seems right with the world, that is until our little space cadets get home and wonder what the hell they were thinking. And that’s the point, they weren’t thinking.
Of course nearly fifty years later, Group 1850 [who hail from the Netherlands] are finding a resurgence of this mind-fuck who drew deeply from the mythic Pink Floyd, lacing their music with organ overlays, a relentless throbbing bass line, trippy effects, chanting, alternative sound phasing, and more fuzzed acid drenched guitar than one in their right mind could ever dream of. But those were the times, the tail end of the psychedelic age, perhaps making Group 1850 one of the first progressive bands of all time.
The album is lyrically based around the hippie-dippy saga of Agemo, son of Dog from the Nirvana-like planet Irotas, who visits Earth to experience the urban paranoia and depravity of modern life. With the album’s musical motifs drawn shamelessly from Saucerful Of Secrets but also evince powerful West Coast acid rock influences.
I will tell you that it’s an amazing snapshot of the times from which it came, and certainly deserves a listen, both for the music, the concept, and the historical significance.
Review by Jenell Kesler/2016
© Copyright http://psychedelicbaby.blogspot.com/2016
Group 1850Jenell KeslerReviews