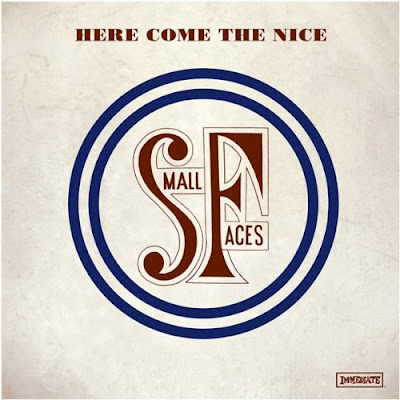 Small Faces “Here Come The Nice” (Charly Records, 2014)
An Incredible Documentation Of Small Faces’ Immediate Records Recordings!
The legendary British mod rock band Small Faces’ recording career was split into two distinctive periods.  From 1965 until 1967 the band, managed by Don Arden and signed to Decca Records, spent the majority of time performing live and recording sessions were sporadic and time in the studio was limited.  However, from 1967 until disbanding in 1969 the group was signed to Andrew Loog Oldham’s Immediate Records label and studio time was virtually unlimited.  Guitarist/vocalist Steve Marriott, bassist/vocalist Ronnie Lane, keyboardist Ian McLagan and drummer Kenney Jones took full advantage of the extended studio time, evidenced by all the unreleased material included in this marvelous box set.
“Here Come The Nice” marks the second 4 CD box set dedicated to Small Faces’ Immediate recordings, the first, also on the Charly label, being 1995s “The Immediate Years” compiled by Phil Cohen and containing every track the band released on the label in Germany, the US and the UK, 86 tracks in all.  The box sets compliment each other incredibly well as the new release concentrates mainly on previously unreleased material, all 34 tracks on discs two and three making their debut here, a huge addition to the Small Faces catalog indeed.
But, I’m getting ahead of myself.  Disc One contains the mono single mixes of all ten singles released on the Immediate imprint, beginning with this set’s title track from 1967 and ending with the 1969 tour de force, “Afterglow Of Your Love”, released posthumously, Steve Marriott having left the band to form Humble Pie with ex-Herd guitarist/vocalist Peter Frampton.  Of the ten singles, six made the UK top 40, with three making the top ten:  “Itchycoo Park” (#3, and at #16 the only Small Faces single to chart in the US), “Tin Soldier” (#9) and “Lazy Sunday” (#2).  Small Faces’ Immediate singles were consistently strong and unlike their Decca counterparts were all band originals, written by the team of guitarist/vocalist Steve Marriott and bassist/vocalist Ronnie Lane.  Particularly memorable to American listeners is the trippy, phased “Itchycoo Park” a real psychedelic gem.  “Here Come The Nice” follows the drug theme, written about the group’s amphetamine connection.  Marriott’s guitar work is consistent throughout, but particularly interesting on tunes such as the classic “Tin Soldier” and my personal favorite the amazing “Afterglow Of Your Love”.  With twenty tracks and a run time nearing an hour, disc one is an incredible introduction of things to come.
Discs Two and Three contain nothing but previously unreleased material, 34 tracks total, an honest to goodness treasure trove for collectors and fans alike.  Ranging from first takes of later finished tunes like “Green Circles” and “Wide Eyed Girl On The Wall” to alternate mixes of “I Can’t Make It”, “Wham Bam Thank You Man”, “Penny Rides A Penny A Glass” and “Red Balloon”.   There are alternate takes on tracks like “Collibosher” “Wide Eyed Girl” and “Call It Something Nice”.  Tracking sessions for never issued songs are included giving the listener a hint of what could have been on tunes such as “Anything”, “Wit Art Yer” and “Doolally”.  Backing tracks like “All Our Yesterdays”, “Fred” and “Jack” while not finished products prove quite interesting even in instrumental format.  An early mix of “Lazy Sunday Afternoon” offers a look inside the band’s songwriting technique.  While the run times on these two discs may be relatively short, the presence of previously released songs such as “Fred”, “Mind The Doors Please” and “Jack” make this set absolutely essential for fans of Small Faces, mod rock and psychedelic rock.
Disc Four collects alternate and out-takes along with the five live tracks posthumously released on “Autumn Stone” in the UK and “In Memoriam” in Germany.  Stereo mixes of single tracks “Itchycoo Park”, “Here Come The Nice” and “I’m Only Dreaming” released originally on “There Are But Four Small Faces” get things going.  The band’s song building is displayed on take 2, alternate mixes of “Eddie’s Dreaming” and “(Tell Me) Have You Ever Seen Me”.  Of particular interest is an alternative mono single version of “Afterglow Of Your Love” presented at the original LP speed, the original single having been deliberately speeded up.  Mono versions of “Me You And Us Too”, “Don’t Burst My Bubble” and (If You Think You’re) Groovy” credited to The Lot-P.P. Arnold & The Small Faces sound ready made for AM radio.  Alternate mixes of “Piccanniny”, “Up The Wooden Hills To Bedfordshire” and “Get Yourself Together” vary sufficiently from the released versions to prove quite interesting.  The disc closes with the five live tracks, recorded at Newcastle City Hall in late November, 1968 and released on “Autumn Stone” and “In Memoriam”.  They have been corrected for speed and have had some of the audience screaming, added in 1969 at Pye Studios, removed.  High energy stuff and a perfect way to end the set!  But…. 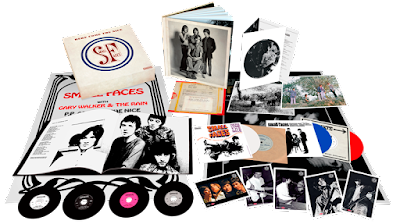 The four discs are housed in a gorgeous 72 page hardbound book with a foreword by Pete Townshend, remembrances by band members Kenney Jones & Ian McLagan, an introduction by reissue producer Rob Craiger, an essay by Mark Paytress and track by track comments by Craiger & Tosh Flood.  Tons of photos and an Immediate years discography are also included.  Then…..
There’s the 64 page softbound book of lyrics, chock full of photos, trippy photos in lots of colors.  But it doesn’t end there…..
There are three replica 45s on red, white & blue vinyl as well as an Olympic Studio acetate, facsimile posters, postcards, Ogden’s Nut Gone Flake press kit and Gered Mankowitz fine art prints.  Whew!  I think that’s it.  All of this in a giant sized lift top box that weighs kilograms.  A heavy weight box set for a heavy weight mod band!