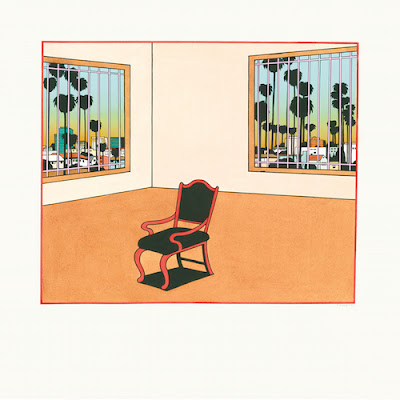 Quilt – Plaza (Mexican Summer, 2016)
Quilt’s new album is sensational on many levels … first the vinyl is clear, second the gatefold album jacket is embossed, and third, it’s a limited edition package filled with brilliant, bouncing, and well constructed bits of wanderlust that will move you through a sun filled afternoon with delight and splendor, or an evening of hypnotic shadow play.
Quilt are one of the few bands who manage to get this 60’s neo-psychedelic revival correct, using sustained cord changes, modest effects, and balance themselves between psychedelic folk and dream-pop as if they’ve got one foot firmly rooted in the past and one in the present, where they splinter the night with one luscious song after another.  The tracks are more enchanting and cohesive than ever, slightly atmospheric, with their vocals now crystal clear, and a presentation that is flawless, as if they’ve handed out mood enhancers that sparkle the edges and fill this album with songs that are well crafted, intimate, and own the space in which they exist … creating a package that’s downright flammable.
Review made by Jenell Kesler/2015
© Copyright http://psychedelicbaby.blogspot.com/2015
Jenell KeslerQuiltReviews