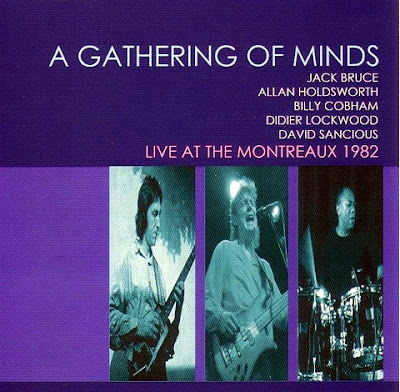 A Gathering Of Minds – Montreaux, July 23, 1982 (Upbeat/Unofficial Release )
Listen
Billy Cobham – Drums
Didier Lockwood – Violin
Jack Bruce – Bass
Allan Holdsworth – Guitar
Davis Sancious – Keyboards
Certain questions appear in music reviews. Some are perennials, tired and polarizing – Can rockers play jazz? Can jazzers ever ROCK? Can the Europeans play jazz as well as Americans? Can blue men play the whites? This recording asks if two future members of the Rock and Roll Hall of Fame, a veteran of “Bitches Brew” and the fusion wars, a French fireball and one of the world’s most technically accomplished guitarists can play compelling, emotionally moving jazz. The answer is emphatically yes, if the players are this particular grouping of musical geniuses.
Recorded at the Montreaux Jazz Festival in 1982, the CD opens with Claude Nobs’ intro in French and English. He then hands over to Cobham, whose set this appears to be as he is the one to speak to the crowd between tunes (at one point he gives credit to Bruce Lundvall and Nobs for helping him pull this group and appearance together on short notice). Things start off with a bang with Lockwood’s “Crazy Eights”. Driven by a rapid-fire series of sequential patterns on violin the piece moves into Mahavishnu territory with Sancious, Holdsworth and Lockwood trading solos over solid Jack and Billy before recapping. As a warm-up piece, this is tantamount to the ignition sequence of a nuclear reactor.
Sancious’ “Mysterious Conversation” is next. Bruce and Billy provide an insistent groove that sounds like intense whispering. Holdsworth’s moody solo abruptly gives way to Sancious (equipment problem?). Bruce tries to take flight but Cobham pulls back for Holdsworth’s ending ride. The piece is over too quickly.
Cobham next gives us his “Ursula In Summer”, written for his toddler. Cobham shows his true colors with a complex Latin-bop groove that never falters as he moves the piece through different dynamic levels from quiet intensity to explosive climax. Jazz/Rock indeed! Sancious electric piano sounds like a sweeter George Cables before giving way to lyrical Lockwood.  Holdsworth is in his element here with a short but intense solo. No other guitarist sounds quite like this – players who claim to channel Coltrane are a dime a dozen, but this guy nails it in his own way.
Holdworth’s “Drifting Into The Attack” begins with moody guitar synth, shortly joined by Lockwood. The rhythm section kicks into a rock shuffle reminiscent of Jeff Beck’s “Freeway Jam” and Holdsworth GOES! Eric Dolphy circle-breath chromatic romanticism (bar lines? We don’t need no steenking bar lines!) Jack takes a somewhat aimless bass solo and then Lockwood serenely brings the piece to a close. Except for Holdsworth, it doesn’t quite gel somehow.
Next up is the Jack Bruce classic “Theme For an Imaginary Western” (which Cobham insists on referring to as simply “Western”). As  many different versions of this tune as I’ve heard, this is one of the strongest renditions as the poignant lyrics are perfectly offset by Bruce’s almost wistful singing and Lockwood’s empathetic playing. His work shows that violin was what this song was always missing, Beautiful. Beautiful Holdsworth too.  One of the great things about discovering this set is being reminded of what we’ve lost with Jack Bruce’s death as we are afforded the opportunity to hear him in a slightly different setting than usual.
Next up is Jack Bruce’s “Uptown Breakdown” (shortly to appear on his Automatic album). Volume–pedal meandering leads into a typical Bruce/Brown bluesy rock tune with a few curve-balls in the chord changes. Tasty Holdsworth on this one.
“Sleight of Hand” by Sancious is next. A driving violin-based head touches on country-western territory while Cobham keeps the pot boiling (nice double bass!) as Bruce breaks up the groove. Lockwood takes flight and ends up in outer space until Billy gives us an extended solo featuring dynamic variation and licks you could sing along with.  A hoedowny recap ends it.
“Bloody Mary” by Lockwood closes the set. It reminds me of Jean-Luc Ponty’s rock-based writing but the bop-four solo mid-section (Jack kills on walking bass!) distinguishes it. Nice violin and Sancious before Holdsworth gets a two-chord vamp to play over, leading into Lockwood’s flying recap.
They return to encore with “the part that is totally unrehearsed…I guess it’s in Bb…” Everybody reaches back to their roots as the jam turns into a good old shuffle blues which is where all these people started anyway.
I suppose if you had to hang a label on this session, it would be “fusion”.  Sure, the sound and some of the stylistic trappings often hearken back to the mid-70s sound of Nemperor Records. But…most jazz-rock didn’t have this kind of heart or this level of musicianship (“chops” are only an ASPECT of musicianship, a fact which much fusion of the 70s and 80s tended to ignore). No posturing, no proselytizing (for L. Ron Hubbard or anyone else) no pretention, just five greats doing their jobs and showing that a real group knows how to listen, interact and support each other. It’s all about the music, not the egos.
Enough already. Experience this for yourself. Trust me, its well worth it.
Review made by Kevin F. Wozniak/2015
© Copyright http://psychedelicbaby.blogspot.com/2015
A Gathering Of MindsJazz CornerKevin F. WozniakReviews