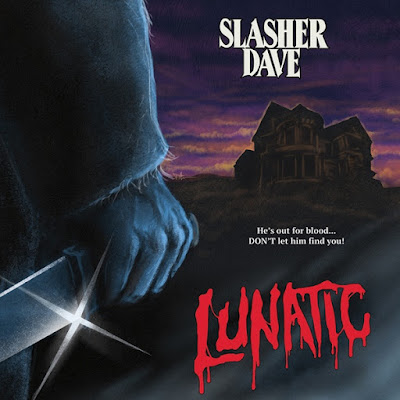 Slasher Dave – Lunatic – 7” (Bellyache Records, 2015)
Of all the recent horror themed synth worshipping bands that are out there right now, only a handful of them have really managed to catch my interest.  And at the top of that list is Slasher Dave.  I don’t really know jack about the Slasher Dave outside of the fact that it will occasionally include the odd guest on guitar or something, but for the most part it’s just really the brainchild of one seriously talented dude.  His last offering, 2014’s Tomb Of Horrors (Review Here) was one my top ten albums of the year, but it’s been a while since I heard much out of him.  Now, all of a sudden he’s released his first soundtrack, at least to my knowledge, the Chubbies Original Soundtrack and a brand new seven-inch EP of four previously unreleased tracks of his patented pulsating, wailing insanity, called Lunatic – both of which are for the Bellyache Records label, the guys responsible for Voyag3r’s album Doom Fortress if that rings a bell for you.  I don’t know if the Lunatic EP is a glimpse of some new material for a new record or Slasher Dave just felt like these four tracks were a kind of self-contained series/unit that stood on their own, but either way, man, am I happy to hear some new tunes from this guy!  “Disturbance At The Mackenzie’s” slithers and glides out of the gate with hypnotic tendrils of synthesizers reaching up from a glittering bottomless pit looming in front off you.  Gritty, echoed bass rumbles up from the demonic chasm into your headphones before suddenly beginning to transmogrify and then lift, like a fog in the amber morning twilight.  Pulsating beams of plasmatic sound begin to slither and drift towards you, their grasp gargantuan and inescapable.  Suddenly, sirens in the distance snap you back to some semblance of reality and you realize that you’re knee deep in undulating synths that are drowning out screams coming from another room of the house.  But just as you head to investigate where the muffled cries are coming from, we fade from that scene and the titular “Lunatic” gets underway.  It’s a truly heavy sounding song, thundering drums that threaten to crack and break apart, hammer ominously as a mist of creeping synthesizers slip in from the top end, disappearing and then reappearing like specters at will throughout the short arrangement.  Sinister stabs of bass and a growing sense of impending doom pave the way to transition from “Lunatic” to for “Evil Lives Forever”.  “Evil Lives Forever” sounds like it could easily have come off of last year’s Tomb Of Horror LP but it’s just at home here on this four track compilation of bedlam amongst the inmates of the asylum known as the Lunatic EP.  A slow lumbering rhythm bubbles up behind the veil of the restrained soundscape of “Evil Lives Forever” until the ghastly organ-like procession of synthesizers begin.  One by one they step into the mix, each one darker and more foreboding than the last, until they’ve created a lurching Frankenstein’s monster of unholy sounds.  As they reach the peak of their frenzy the wails of the organs fade and give way to the heavily Halloween III influenced sounds of “Darkside”.  If there wasn’t quoted dialogue throughout the song it literally could have come off of some unused reels from some of Carpenter’s top-shelf stuff.  But the longer you listen, the more you can hear one of Slasher Dave’s trademark pads in the background, a sting that I have fallen in love with over his past two albums, and one that marks it as uniquely his own.  The tracks on Lunatic are all good, they’re short, sweet, and straight to the point – really, I don’t know what else you could ask for from a release.  I can only hope that this is a primer for a new album from Slasher Dave, but either way this is a killer EP of four tracks that any synth loving, horror, giallo or dark wave electronic freak is not going to want to miss out on.  Slasher Dave’s stuff doesn’t always immediately sell out, but rest assured it won’t stay in print long.  For now Lunatic is available in equal pressings of 250 copies on Black Wax and 250 copies on Red Wax, but that red stuff ain’t gonna stick around much longer, so get on it if you want it!  If you’ve read my review of the Tomb Of Horror (Review Here) or even just checked out Slasher Dave’s stuff before than I probably don’t have to sell you on the guy, but I seriously recommend his stuff, it’s top-shelf, certified bad ass with no questions asked and one hundred-percent It’s Psychedelic Baby endorsed! 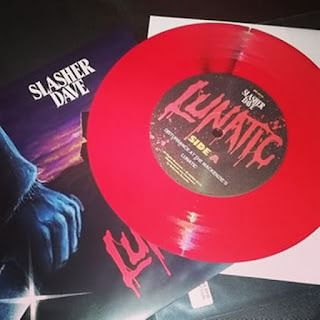