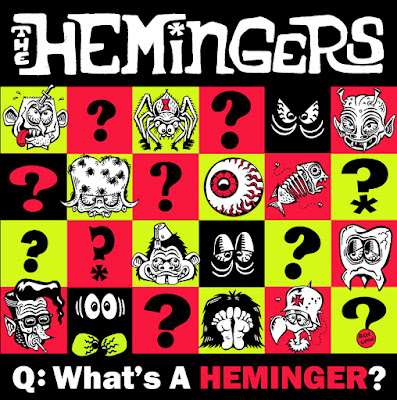 The Hemingers – What’s A Heminger? EP – 7” (Magnetic South Records, 2015)
Heaven help us all, the Hemingers have delivered another slab of absolute insanity.  Probably best known as Ben Lyons musical outlet, The Hemingers have a somewhat sporadic, if not always extremely entertaining, back catalog of seven-inches at this point for the likes of the absolutely killer Goodbye Boozy – so you know they’re legit.  Instantly conjuring up images of The Mummies and other lo-fi garage rock gods The Hemingers have offered up four new tracks of blown-out mental illness in the form of the What’s A Heminger seven-inch EP for the always amazing Magnetic South Records out of Indiana.  Starting fittingly with “What’s A Heminger?” the EP kicks things off in sinister style.  The vocals are crispy, chocked and filtered through what sounds like an old ribbon mic, reverberating and echoing like they were recorded at the bottom of the deepest well the band could manage to find.  Exactly what a Heminger is I still couldn’t tell you, but what I can tell you is that this is some severely infectious music; I don’t toss around The Mummies name lightly folks, they rocked my world like few others ever have!  If I were to attempt answer the question of what a Heminger was based on this song though, I would make a guess at some drunk crazy man, who plays some wicked rock’n’roll and drives a bad ass rat rod simply mowing down anything in his way while he’s blaring rock’n’roll on the radio the whole time.  Following out from that, “C’Mon Shake” takes the energy level up a notch and really gets things kicking from the start.  The unison vocals and breakneck speed team together to produce some top-notch garage psych here, at points they just completely unhinge the melody and attack the soul of the song twisting and bending it, decimating it to its very core.  “Junkie Jane” seriously almost sounds like an outtake from Never Been Caught.  There’s an infectious leather studs and biker feel to this one that just kicks your teeth in, crawls into your skull through the hole and immediately sets to tearing up anything that it can sink its teeth into.  The rampaging melody of “Junkie Jane” smashes around like a headless corpse for two and a half minutes, covering everything in gore and gnarly, fuzzy, distorted guitar exploding from every empty nook and cranny of the song.  “Little GTO” finishes things off.  It keeps the frantic energy of the rest of the EP up, while adding a little bit more of a melodic element at the same time and offering up some seriously sweet stop-and-go breaks in the song that could give any lesser band whiplash, instantaneously stopping on a dime and then rocketing back out of the gate several times throughout.  While the EP may end is never really winds down and “Little GTO” is a non-stop balls-to-the-walls example of the heinous, venomous garage rock that The Hemingers are capable of reeking like havoc on anyone who might be unsuspecting or momentarily unwary.  If you’ve not heard them yet, there’s a link below.  For everyone else who’s in the know, the same link will take you where you need to go to pick yourself up a copy.  Don’t miss this, it seriously non-stop fun from beginning to end!
– Listen and buy here:  https://magneticsouth.bandcamp.com/album/the-hemingers-whats-a-heminger-7-ep
Review made by Roman Rathert/2015
© Copyright http://psychedelicbaby.blogspot.com/2015
ReviewsRoman RathertThe HemingersUnderground of the Day Series