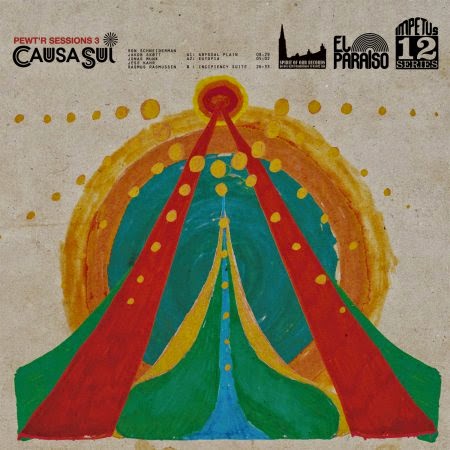 Causa Sui “Pewt’r Sessions 3” (El Paraiso Records, 2014)
This third round of studio jams and technical tomfoolery
between Sunburned Hand of The Man’s Ron Schneiderman (Pewt’r) and Danish
improve gods Causa Sui is another highlight in the transatlantic brotherhood of
psychedelic explorers. The pair reunited last summer when Schneiderman returned
to Copenhagen for the Festival of Endless Gratitude, and they all retired to
Causa Sui’s Odense studio for a full-on session of kosmichemusik! “Abyssal
Plain” starts hesitatingly as the artists feel each other out, exploring
potential directions for their music to wander. The title refers to massive
plains on the deep ocean floors that cover half of the Earth’s surface. It
perfectly captures the floating, occasionally oppressive vibe of the track,
which finds our musicians eventually exploding out of the introductory
straightjacket of tentative, exploratory sounds.
‘Eutopia’
is another mellow floater, a hallucinogenic trip on a fantastic voyage to
innerspace. But the highlight is surely the sidelong “Incipiency Suite”,
assembled by Causa Sui sound sculptist Jonas Munk from several spontaneous,
freeform jam sessions and abettedby his own studio wizardry. It’s to Munk’s
credit that the pieces gel so seamlessly, as if they turned on the recorder and
wailed away for half an hour and then rewinded to see what they captured! A
little nip and tuck here to edit the lulls and you have another mind-numbing
psychedelic voyage that illustrates why separately and together, these are two
of our finest artists on the krautock / stoner / free jazz scene today
For fans of both artists, as well as the similarly
collaborative mind fucks of Roy Montgomery and Bardo Pond (aka Hash Jar Tempo)
and their titular influence (Ash Ra Tempel).
Review made by Jeff Penczak/2014
© Copyright http://psychedelicbaby.blogspot.com/2014
Causa SuiJeff PenczakReviews