Hand’s new record “The Other Side Of The World”

Hand’s new record “The Other Side Of The World” 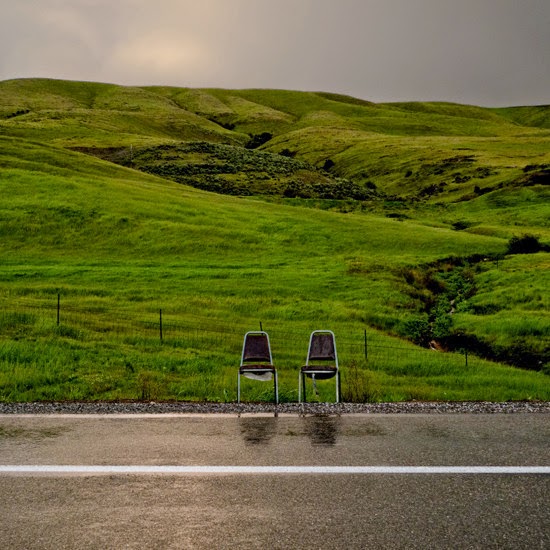 Welcome back, Marc. Since the last time we interviewed you much has happened with HAND. Could you begin by telling us how the band
reunited?
Well, it was truly unexpected, a dream that came true and
has exceeded all my expectations. In April of 2013, I was approached by two of
my students and one faculty member of Hamden Hall, the Connecticut school where
I teach, to join them in singing three of my songs for a school Coffee House
musical event. They were aware of my music through the Golden Pavilion reissue
of HAND’s 1972 LP “Everybody’s Own”, which a number of students had purchased
and downloaded onto their iPods.  Joining
three more young musicians on stage, along with my old friend Nick Zoullas, the
superb harmonica player on the first record, we played a barely rehearsed three
song set that should have been a train wreck, yet was a thing of ragged,
authentic beauty that stunned us and an enthused audience of about a hundred. It
led Nick and me to thinking that perhaps our music days were not over after
all, and might be only beginning.
How did you follow up on this initial success, and take the
next step forward?
I had something of an epiphany, and decided to do take a
leap into an improbable scenario: I would send the recording of the rough edged
Coffee House set to Antonio Barreiros of Golden Pavilion, and propose that he
agree to release a new HAND album. The band would include several teenagers,
highly gifted musicians all, my colleague and friend Arnie Sabatelli whose
guitar virtuosity was a core strength of our new sound, and we would all meet
in June of 2013 for a week of intense rehearsals, immediately followed by a
three day recording session at Firehouse 12 studio in New Haven, Ct.
Coordinating such a project should have been near impossible in such a short
time, yet it all fell into place with relative ease, as though it had been
preordained. In ten days, with my songs at the center of our efforts, we forged
a real band, and the new HAND album “the other side of the world” was released
in January of 2014. I still pinch myself at the fact that it has all come to
pass.
Could you tell us a bit about the new line- up of HAND? How
much have they helped to evolve the new sound?
I cannot over emphasize the importance of this line-up to
HAND’s current sound. We have added one new player to the line-up since the
record was released. Each musician has contributed their talent and ideas, and
they are as responsible as Nick and I are for the quality of HAND’s new music.
They are, in no hierarchical order at all:
Nate Hill, 17 years old, a fluid, deeply talented bass
player with music coursing through his veins;
Franklin Van Nes, 18 years old, a versatile drummer
comfortable in genres as varied as ballads, bossa nova and hard rock;
Mariel Yaghsizian, 19 years old, whose soft sandpaper and
dark honey voice stopped me in my tracks when I first heard it, such was its
impact, as if it had come from my very own imagination;
Arnie Sabatelli, my fellow educator whose virtuosic and
eclectic guitar playing helps to bring a textured sound to the songs;
Klemens Gowin, our 18 year old pianist, classically trained
and a composer in his own right, who has entered the world of progressive folk
/ rock with natural ease;
And Nick Zoullas, whose harmonica helped to define HAND’s
sound, and still does so today with unerring originality.
Our newest member is 18 year old violinist Libai Jordan, a
classical musician whose gifts are prodigious, and who brings a new dimension
to our music, particularly as his instrument melds with Nick’s harmonica.
My contribution has remained that of principal singer,
rhythm guitarist and composer. My greatest joy, however, is the recently
developed collaboration with Mariel, who has proven to be a splendid lyricist.
We have co-written four new songs thus far which will be on our next album,
with more on the way, and they are among the best music I have ever been
associated with. She descends from an illustrious musical lineage: her
grandfather was jazz giant Dave Brubeck, her grandmother Iola Brubeck was a
noted lyricist, and her uncles are brilliant musicians leading their own bands
and musical careers.
I must also mention that, in the absence of Klemens who is
at college, we have been graced with the talents of Waylon Chang, a 15 year old
pianist of great skill and sensitivity who has been our concert and rehearsal
pianist throughout this school year and without whom we could not have
progressed as we have.
As I list the credentials of the musicians of the new HAND
for you, I am more conscious than ever of my own good fortune to be associated
with such a group.
Could you talk a bit about the unique aspect of several
generations playing in the same band? How has that aspect manifested itself in
your musical and personal relationships?
When we play music together, we are united in our passion
and quite oblivious of age differences. We have all formed friendships, and we
interact socially with a comfort and ease that you rarely see between
generations. It takes a particular moment, an unexpected comment perhaps, to
remind us of the years that separate us. For the most part, I have ceased to be
subservient to the chronology of time, and all of us move together in time’s
vast ocean.
On a musical level, we all influence each other, listen to
one another, and bring our musical knowledge to bear whenever we work on our
music, particularly when structuring the new songs slated for the next record,
to be made in Italy this coming July. 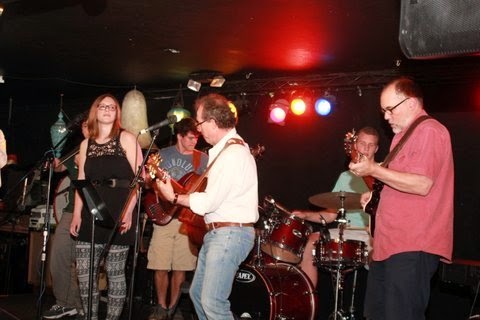 Before hearing more about the coming album to be recorded in
Florence this summer, could you give us a brief track- by -track commentary on
the eight songs that form HAND’s new CD and LP “the other side of the world”?
I will try…
Track 1: Down The Road
This song was written in the 70’s. It tells a surreal tale
of farmers leaving their ploughs to find freedom from the drudgery of their
endless work, as they search for greater meaning “down the road” where “life is
different”. This track has remained a favorite of those who have known it since
its beginning, and it retains its poetic verve. The driving lyrics narrate the
story at a fast pace, and the violin and harmonica seduce us onward from verse
to verse.
Track 2. I Don’t Forget (so soon)
I wrote this one when I was still in high school. It has a
particularly evocative and nostalgic quality imparted by Nick’s harmonica and
Mariel’s haunting harmony on the chorus. It has layers of personal memory that
still resonate for me from my days growing up in Switzerland.
Track 3. St. Ives
Written in the mid 70’s, it was an impressionistic
recreation of the Cornish seaside town of St. Ives, mingled with my passion for
my then girlfriend Marcia (we have been married since 1978), for whom this song
was composed. The band’s contribution to changing this tune from a slower
ballad to a kick ass anthem has helped to make it a particular favorite.
Track 4. Don’t Cross That Line
This song was written in the late 80’s and is built around a
dialog between lovers whose battles have wounded them both, but have not yet
left them without hope for redemption. Mariel and I trade verses and barbs,
harmonizing on the chorus and bridge, trying to help redeem the sad fools in
the story. If it evokes a Tammy Wynette / George Jones duet, sung in their
fighting and forgiving mode, I will be pleased.
Track 5. Feather In The Wind
This song is dedicated to my daughter Ali. It was written
before she was born, and it is clearly a loving foreshadowing of the path she
has traveled as a teenager and a young woman, “traveling light, wherever the
wind may glide, like a feather in the wind”.
Musically, it is an unconventional bossa nova, and
highlights include Franklin’s percussive turn on the “cajon”, Nick’s wondrous
harmonica, Nate’s swinging acoustic bass, Arnie’s Spanish guitar, and Mariel’s
echoing voice channeling Astrud Gilberto.
Track 6. The Other Side of the World
This is a song about love lost, disappointment met with
determination to recover one’s independence “instead of living in my thoughts
of you”. I did not write it for Mariel to sing, but she sings it as if she had
been born to bring it to life. Her subtle and powerful performance is greater
and deeper than her chronological years should allow, and helps to underline
how little we care in this band about chronological time: experience can be
gained in an instant, understanding can be reached in a flash. It quickly
became the title track to our new release.
Track 7. Since You’ve Gone
This one was written in Spain, and it is a nostalgic song
about deeply missing someone to the point that “I whistle to hide the pain
inside, it does me good.” Listen for Nick’s harmonica to play that whistling
tune, and for Klemens’ reflective, dreamy coda on piano.
Track 8. The Hard Way
There are some people who do things “the hard way”, no
matter what. This song is an ode to such tortured, sweet souls. The melody is
patterned in part on Pachelbel’s Canon, but transformed quite utterly by the
lyrical content, the chosen instruments, and the arrangement. Arnie’s wrenching
electric guitar riff which drives the closing movement still makes the hair
stand on the back of my neck.
Tell us about the next album, to be recorded in Florence,
Italy this summer.
It is still a bit of a dream to me that the next record will
be recorded in a city where I lived, between the ages of 5 and 7, while my art
dealer father was studying Renaissance art at Bernard Berenson’s famed Villa I
Tatti. We have been hard at work, arranging the new songs being written by
Mariel and me, and the band is poised to make a creative leap in a new
direction, while still remaining anchored in the classic sounds of American
rock and folk. I couldn’t be more pleased with the new material, with the
vitality of our motley band, and with the continued support of Antonio
Barreiros and Golden Pavilion. We’re into new musical territory, but it feels
familiar all the same. HAND was born in the heart of Europe, and it seems
appropriate that our new music will be recorded once again in the old
continent.
CDs and LPs are available for sale at hand-band.org 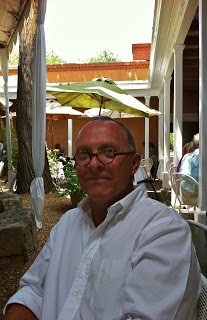