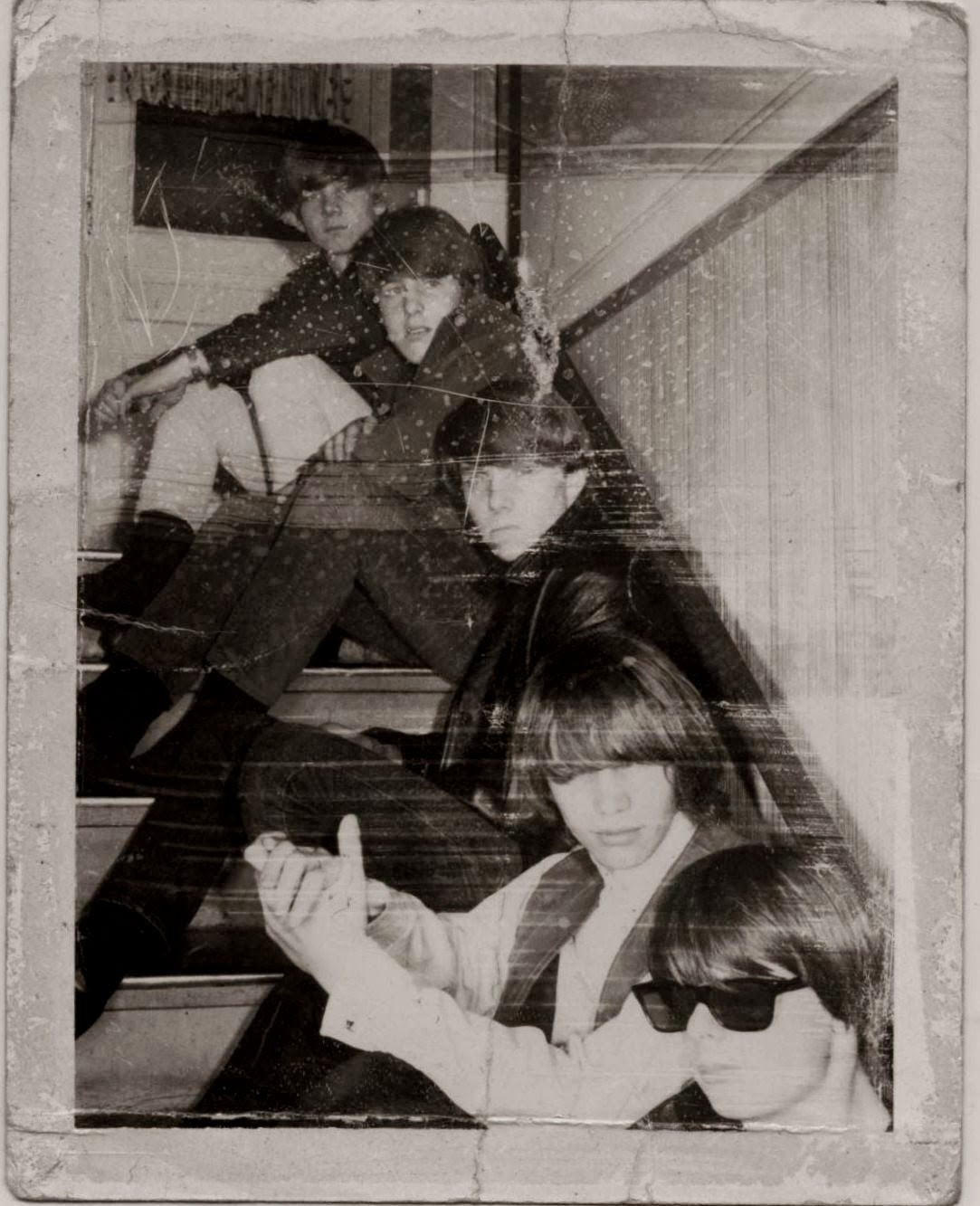 Original DIY GANG promo picture (Steve Farmer in shades)
next to Greg Arama.
I had awoken a bit groggy this morning. No surprise,
considering my excursion with the SRC at the Magic Bag the night before.
Brewing some coffee, I ordered up for breakfast, then checked my calendar just
to confirm the date. Ah yes, present time, I thought to myself. This is good—or
is it?
I opened the hotel curtains and stood at the window for
several minutes, gazing at Windsor on the other side of the glistening Detroit
river.  Figuring that some music might
perk me up, I turned on the bedside radio. Some local station was spinning
psychedelic classics—just the ticket to stimulate my drowsy mind.
I was really enjoying the retro ‛60’s tunes. But then a song
came on that really blew my mind:
‟You’re got to redefine yourself…If you wish to find…The
crystal visions of an open mind…And it’s easy, it’s easy, it’s oh so easy to
do….” 1
Astounded, I turned up the volume on ‟Starvation” by one of
acid rock’s most eternal bands—Golden Dawn. Their groovy sound and insightful
lyrics filled the room…. I was diggin’ the way the music was opening up my
eyes and mind. How much better could this get? What a way to start a day! 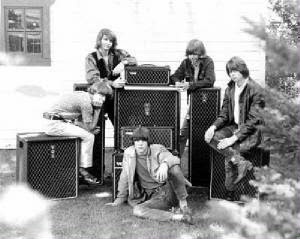 Early days of The GANG, one of the first bad boy bands in
the Motor-City.
‟We had this musical competition going between the Gang and
the Lourds,” Steve stated, ‟as we were from the Detroit area, and the Lourds
hailed from Chicago. However, here was the caveat—one of their members had
grown up in Detroit, and he had a cool rep—everyone had heard of him. This, of
course, was Ted.” Farmer paused briefly, taking a heavy toke from a joint just
handed him. ‟The Lourds dressed more in a stylistic hippie manner, whereas us
members of the Gang wore the Brooks black leather jackets. We believed that our
look, and most importantly, our attitude, captured the reality and vibes of the
Motor City,” he stated with a grin.
‟My friends and I were all in high school together, right here
at Southfield High, and it was my fascination with the bad boy look of the
Rolling Stones that really gave me the drive to form a band,” Farmer recalled.
‟The Beatles were just too clean cut and more of a girl’s band. But the Stones,
you see, had that image and style of the working class that we all identified
with. It was with this in mind that I began developing my first band, the Gang,
with Greg Arama, Dave O’Brien, Jim Butler, and Don Henderson. We jammed around
the Detroit area and soon came across others of the same mindset. I’m referring
here to our camaraderie with the Fugitives, who, by the way, were to evolve
into the SRC. Any show in which we shared a stage with the SRC was always a
great show!” At this point Rick Lober nodded in affirmation.
‟There were places we hung out at that really fit the image,
such as The Cellar and The Hideout, which was in all actuality Hideout
Records….” On and on Farmer went. Both the groupies and even members of the
Who sat listening attentively, taking in all the groovy background on the band
as the joints were passed.
‟It was when Ted moved back to the Detroit area with his
band, the Lourds, that the melding of our two distinctive outfits took place.
Much like the pulp novel, we united and formed the Amboy Dukes. The band was
rockin’ tight for our first three albums. And everything seemed to gel when
‛Journey to the Center of the Mind’ hit number one nationally.”
What? Wait a minute—first three albums?  If this was 1967—and I was fairly certain it
was—the Dukes had only released one full length album so far. Looking around
me, I noticed puzzled expressions on the faces of some of the listeners in the
room.
But Farmer carried on, giving detailed impressions that he
knew of what was to happen in times yet to come. Launching into a history of
the Amboy Dukes from the vantage of ‛72 to ‛86 and then on to 2001, he painted
pictures so vivid there was no question he had already lived it all. What the
hell, I thought. I knew the history of the Dukes, as I had traveled from the
future to be here, but could there be others in the room who were
time-travelers as well—in particular, Mr. Farmer himself?
It was all here: the beginnings of the Dukes, how this had
brought about the subsequent formation of the Wilson Mower Pursuit, and Ted’s
recognition of the talented ‟Wheatgerm” as the only guitarist in Detroit he
felt could hold a candle to his own expertise. Steve spoke of the legendary
Grande Ballroom with such passion that it came alive. There were details of the
Dukes’ tour with Hendrix, the recording of their first albums, and the origins
of and inspirations for both ‟Journey” albums, from ‟Journey to the Center of
the Mind” in the ‛60s to the band’s comeback sans Ted on ‟Journey to the
Darkside of the Mind” in 2000. And get this—the time Ted did LSD (did I hear
that right?)!
All the while, Ted himself had been unbelievably quiet,
tuning the strings on his guitar off to the side of the room (thank God for
small favors)!
Mesmerized by it all, I was completely absorbed with the
energy of the room. Then it hit me—I was not the only LSD time-traveler here.
This was evident by the words and expressions I was hearing from some of the
others. It seemed they had also returned for this historic event.
Damn! This was one step beyond the twilight zone! What an
incredibly freekin’ treat this was turning out to be! Farmer became more than a
storyteller; he was rendering a private viewing, in 3-D technicolor, of the
history of the Detroit music scene—and we all had front row seats. 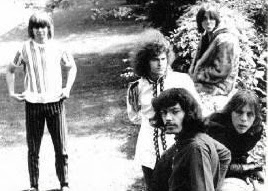 Beatle Bob (front) along with Wheatgerm, George Korinek and
newest member Bob Franco hook-up with ex-GANG spin-off members Dave O’brien and
Jim Butler to form the Detroit psychedelic rock outfit The Wilson Mower
Pursuit.
So, my fellow time-travelers, tune in for the next exciting
feuilleton chapter in this band’s most incredible journey, where you will
witness the conflict between Hendrix and Nugent, and ride with a youthful Ted
high on the gonzo waves of  LSD. Get
ready to revel in the rebellious adventures of one of Detroit’s most
galvanizing bands, and marvel at the never before talked about exciting
escapades of one of the finest outfits to ever emerge out of psychedelia. All
this and more, coming to you from one of the most creative musical eras and
grooviest locations to ever exist on this planet…the 1960’s Motor City!
Stay turned
on for part 2
1.Golden Dawn
– Starvation –  George Kinney / T. Ramsey
1967
2. Hot Smoke and Sassafras – Bubble Puppy – Fore / Prince /
Cox / Potter – 1969
3. She Lives (In A Time Of Her Own)  – 13th Floor Elevators –  Roky Erickson / Tommy Hall 1967
Column made
by Michele Dawn Saint Thomas/2014
© Copyright
http://psychedelicbaby.blogspot.com/2014
Amboy DukesColumnsMichele Dawn Saint Thomas