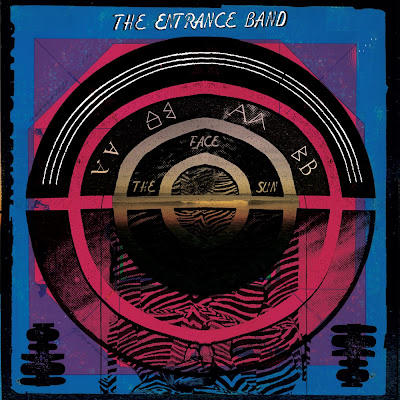 The Entrance Band “Face the Sun” (Beyond Beyond Is Beyond, 2013)
Guy Blakeslee is a man of many faces and talents. Every time
I see him perform he seems to have been cascaded by a new identity and the
music is telling of that change in identity. While Blakeslee has a history of
recording under a bluesy solo moniker of Entrance, then transitioning from that
to a full band with the epic heavy death rattle Blues masterpiece Prayer of
Death. Only after that did he change the name of the group to The Entrance
Band. And with that, they released an eponymous debut album to celebrate the
collective’s cohesion. With this release, there came a different dynamic in
sound. It was as much set in Blues and Psychedelic Rock as it was an almost
likely return to arena Rock of days old.
For this reason as well as The Entrance Band’s live
performances that are quite simply matched by none living today, I have kept
them on my radar for several years. They delight every human sense. Needless to
say, I was enthralled when I discovered Face The Sun, their sophomore album.
The Entrance Band relish in psychedelia here, swirling guitars, sumptuous
wah-wahs, lyrical witchcraft. “Fine Flow” is a fantastic album opener, setting
the stage with a bassline that will stick like a wad of gum to the back of your
mind. “The Crave” is an especially appealing track, Blakeslee’s vocals are
wanton and pained with delicious Blues harp interjections and the gentle
addition of harpsichord in the track’s culmination. “No Needs” is The Entrance
Band’s radio worthy track of the album, for it really shines with powerful
vocal delivery, outstanding and diverse instrumentation (even featuring a flute
driven climax). The real spectacle of this album is the diversity in styles
they embrace. Borrowing instrumental techniques from various country-oriented
genres such as Spain’s fingerpicking Flamenco and various earthy percussions.
With each listen, a new layer of this album unravels and reveals itself to you.
Pick it up and treat your mind to its elaborate caress, or for that matter, go
for the gusto and pick up The Entrance Band’s three EP’s Dans La Tempete, Fine
Flow EP, and Latitudes, all recently released and give them all a listen in
succession. That will really take you on a spiritual ride!
There is no telling where The Entrance Band will take us
next. If I may be so bold, they may very well prove to be the Psychedelic
equivalent of this generation’s The Doors, even if only by name. Offering us
entrances to alternate realities one album at a time.
Review made by Hunter Gatherer (The Forgotten West)/2014
© Copyright http://psychedelicbaby.blogspot.com/2014
Entrance BandHunter GathererReviews