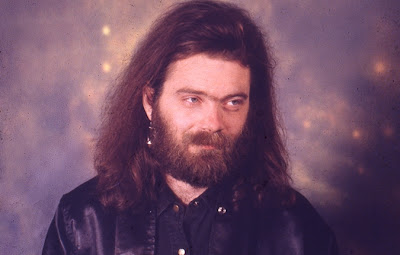 Roky Erickson
The Evil One (1981)/Don’t Slander Me (1986)/Gremlins Have
Pictures (1986)
Light in the Attic reissues
Taken together, these three albums comprise
the most worthwhile segments of Roky Erickson’s post-13th Floor Elevators
career. Thanks to Light in the Attic’s usual tender loving care, they can now
be appreciated in full. 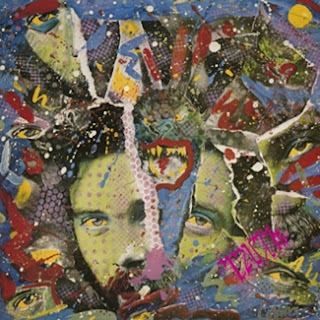 The
Evil One, easily the highlight of trio, is the best thing Roky’s ever done
outside of his work with the Elevators. It got called different things in its
various editions, but initially it came out in 1981 via CBS U.K. under this
title. CCR’s Stu Cook produced from Cosmo’s Factory, Roky was on fire
artistically, and backing band The Aliens simply kicked rear. Roky cited The
Yardbirds, Who, and Kinks as exemplars of the type of “ferocious” rock and roll
he meant this album to contain; he accomplished that and then some. Fine as the
record is, it might have confused many Elevators heads, due to its shift in
lyrical content from what could be heard on Psychedelic Sounds, Easter
Everywhere, and Bull of the Woods. Gone were the Elevators’ cosmic anthems that
tripping hippies could use as personal manifestos, replaced by songs that
name-checked some of Roky’s beloved B-grade horror movies. The titles tell half
the story: “Creature with the Atom Brain,” “I Walked With a Zombie,” “Two
Headed Dog,” etc. Roky is set free to go off on these exploitation film
tangents, while the Aliens positively rip through the scorching backing tracks.
The end result is high-octane trash rock that must’ve had the likes of The
Cramps seething with envy at the time. Sadly, Roky’s unpredictable antics would
soon drive The Aliens in search of advetnures without him as their frontman.
But for the amount of time they worked together on these sessions, Roky
Erickson and the Aliens were one of the best things going on the music scene of
the late 1970s/early 80s. The above-referenced tracks are only three of roughly
10 stone classics this brilliant album includes. 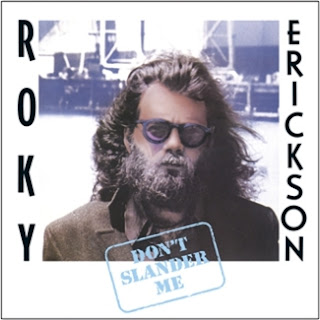 Years
in the making and finally released in ’86, Don’t Slander Me is the most, um,
subdued of this trio of albums. Subdued is not a word one generally associates
with Roky Erickson, but the fact is, if you didn’t know anything about Roky and
you heard some of the songs from this album, you’d think he was just a regular
rock and roll bloke doing some pleasantly tuneful tracks. “Starry Eyes,”
“Hasn’t Anyone Told You,”  “Realize
You’re My Sweet Angel,” “Nothin’ in Return” are all straightforward lover’s
laments with Roky sounding calm as he croons, and the band (which included
bassist Jack Casady of Jefferson Airplane) playing in a (gulp) mellow kind of
way. That’s not to say Don’t Slander Me doesn’t also contain some up the
supercharged Roky heard on The Evil One. The superb title track, “Haunt,” and
“Crazy Crazy Mama” all have that white-hot feel that gives you the sense you’ll
get electrocuted if you get too close to the turntable as they spin. To hear
Roky wail through the title track, and to hear him let out a sinister chuckle
on “Burn the Flames,” you are reminded that you’re listening to the work of a
guy with an inflamed brain. Overall, though, Don’t Slander Me is a more
straight-ahead, dare I say laid-back effort, in comparison to The Evil One.
It’s got four or five stellar tracks and about that many selections that fall
flat. 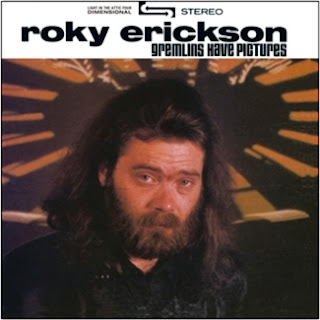 Gremlins
Have Pictures is the most difficult of these three to peg. The other two were
proper albums, albeit ones which took years to compile and get released, while
Gremlins is a hodgepodge of tunes recorded in different phases of Roky’s
career, with different support players working behind him. Backing bands The
Aliens, The Explosives, and Blieb Allen take turns backing Roky, some of the
songs are studio efforts and others catch the band live on stages in Austin, TX
and various parts of California, there’s the two-sided single that was a very
early Rhino Records issue, from ‘77. But if the content of this album is
somewhat scattershot, the quality is perfectly clear. This compilation is a
sheer treasure for Roky fans, and one that displays various facets of his
blazing talent. On the stage (the live stuff is dated over a range that spans
1976-81), Roky sounds focused (yes, I said focused and Roky in the same
sentence) and the bands are energized. The eerie “Night of the Vampire” is one
of the best songs Roky ever did, the live version of The Velvet Underground’s
“Heroin” bears Roky’s own stamp, “I Am” and “I Have Always Been Here Before”
(the latter wonderfully re-imaged by Julian Cope on the Roky tribute album
Where the Pyramid Meets the Eye) are two of the finer Roky acoustic numbers.
Gremlins Have Pictures finds Roky alternately rocking out, brooding, wild-eyed
wigging, and being plaintive. It’s a must-have.
With
all three of these reissues, Light in the Attic includes deluxe packaging
containing extensive and informative liners, eye-catching photos, and other
graphics that will dazzle Roky enthusiasts. All told, this trio of reissues
nicely captures some of the finest moments in the career of one of the most
fascinating, influential, bizarre recording artists in the history of popular
music.
Review made by Brian Greene/2013
© Copyright
http://psychedelicbaby.blogspot.com/2013
Brian GreeneReviewsRoky Erickson