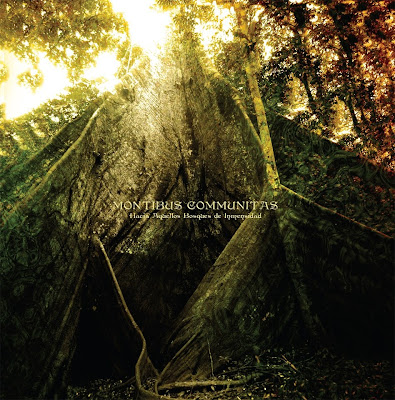 Montibus Communitas “Hacia Aquellos Bosques
de Inmensidad” (Trouble In Mind, 2013)
This third release from the Peruvian
spiritual collective (roughly translated as Mountain Community) continues to
deliver deeply personal devotional music honouring their natural surroundings
in the river valley outside Lima. As with previous releases, much of the music
was recorded and composed on the spot, making them truly unique improvisational
journeys to inner peace. Like 70s krautrockers Amon Düül, Liverpudlian cult
goths The Revolutionary Army of The Infant Jesus, and Christian musical
spiritualists The Trees Community, there is a communal vibe with religious
overtones to their soothing, meditative music. Nature itself is as much a
“composer” as an inspiration for these musical mood poems (the title translates
roughly as “Towards Those Vast Forests”), which are played mostly on acoustic
instruments like flute, bongos, violins, an acoustic guitars.
The
band feed off each other as moods rise and fall, variously peaking and gently
settling back to earth like falling leaves cascading on a warm summer breeze.
The violin is more pronounced thoughout “Inti Uku Pacha”, but fluttering flute
and gently strummed guitar wander around the melody line like a snake
slithering across the river valley winding its way near the studio where the
band recorded these tracks ostensibly in a single setting on November 4, 2011.
Brooding,
hallucinogenic, frightening, ethereal – all of these emotions run up and down
your spine as you expose your minds to the collective embrace of nature and its
beauty envelops you inside these four lengthy messages of love. For fans of
communal improvisational music, spiritual musical endeavours cited above as
well as Atman, Magic Carpathians Project, Ghost, and the meditative aspects of
Acid Mothers Temple. This is religious and spiritual music of the highest
order.
Review made by Jeff Penczak/2013
© Copyright
http://psychedelicbaby.blogspot.com/2013
Jeff PenczakMontibus CommunitasReviews