SUNFLARE
Everybody knows the sun has outbursts of
energy. Violent eruptions that can even disrupt Earth’s magnetic energies. What
most people do not know is the sound it makes. Unless you are one of the
persons who ever witnessed Sunflare live. I, for one, survived to tell the
tale…
Sunflare are a Lisbon power trio with
emphasis on power and their instrumental monster jams are delivered with ear
piercing volume, either on record or live. They already have three recordings
under their belt and if Japanese psych rock noise abuse is your thing, then
look no further.
Personally, live is the best place to catch
Sunflare and their mind melting, eardrum blowing, non-stop stampede of driving
rhythm, heavy bass and free form feedback soloing. If you ever catch them live,
you will witness a blazing eruption of sound emerging from the amps. Hell, they
were even better than Oneida when I saw both bands on the same bill! On that
particular show they were fronted by none other than Mr. Damo Suzuki. The
Japanese veteran had to return two or three times because there was no stopping
Sunflare’s solar eruptions and outbursts.

http://www.myspace.com/sunflarefuzz
http://www.youtube.com/watch?v=dkJvEzrEmIY
http://www.youtube.com/watch?v=SNjtPlSTw-Y
http://www.youtube.com/watch?v=m65O-QXHCbU
THE QUARTET OF WOAH!
More traditional in sound, The Quartet Of
Woah! hail from Lisbon as well. They just released a record filled with classic
psych prog rock without ever indulging in the sometimes silly  pomposity of prog rock.
The strongest standpoint in their sound are
the vocals. Richly flavoured harmonies that intertwine around the music, they
hand out organ driven songs like Ken Hensley’s finest hours. All four members
sing with Gonçalo Kotowicz and Rui Guerra delivering most of the main vocals. Imagine
Jimi Hendrix playing with Deep Purple and you will start to get the picture.
Though some could lump them into the QOTSA pile, The Quartet Of Woah! have a
rootsier feel to their sound that makes them stand out from the herd.
Live they are like a living breathing
monolith with a rock solid swinging groovy tight heavy lightness sound that can
make you groove and headbang like there’s no tomorrow. 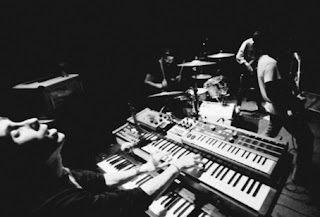 https://www.facebook.com/thequartetofwoah
http://www.youtube.com/watch?v=sBikOKiFM64
http://www.youtube.com/watch?v=P8YCbg4hoZQ
BLACK BOMBAIM
Coming from the unlikely psych stoner
garage capital of Barcelos in the North of Portugal where Earthless and Karma
To Burn are household names for all the youngsters, Black Bombaim are one of
the ‘oldest’ Portuguese acts of pure stoner rock jams. Highly influenced by the
forementioned Earthless, Black Bombaim’s sound rises slowly like the smoke of a
small dry leaf before a forest fire. The bass comes on, the drums emerge and
the guitar wails out there in the distance and before you know it, you have to
call the fire department. The trouble is, everyone’s a pyromaniac when these
guys are playing.
Also a power trio, Black Bombaim have an
EP, two LP’s under their belt (the second being a double vynil psych bonanza)
and also a split with The Notorious Hi Fi Killers. When they venture into
Lisbon, they are happily joined by an audio generator delay freak theremin
master that adds a Hawkwindesque feel to their whole sound and makes the flames
rise even higher into the sky, with it’s smoke so thick it can block the sun
like an eclipse.
Catch them before the fire brigade does and
ruins the fun for all the pyromaniacs out there. Out there in space, I might
add… 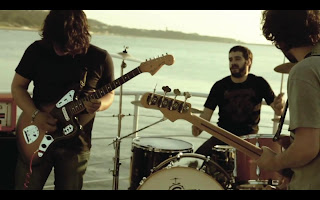