I’m not your typical concert reviewer. So,
if you’re looking for details as the setlist or length of songs, you are not
going to get those informations. What you will get is my personal recount of
what went on. With this in mind, let me describe the events of June, 21st,
2013. I had recently discovered Night Beats and I went to the show having heard
only a few songs. This way, it was going to be a full on experience of finding
out a new band.

The first act was Portuguese blues howler
Fast Eddie Nelson. Then, it was time for the true beat of the evening to bring
on the night.
Though they are based in Seattle, Night
Beats come from Texas and they ooze their origins through their sound. Starting
off with a big bang of sound, they jingle and jangle bringing to memory that
other famous Psychedelic Texan band from the sixties that I won’t say the name.
The difference is, unlike many more copycat bands out there, these guys are not
copying anybody and they reach deep into their souls to make familiar sounds we
think we heard before their own. It’s as if they have their a still uncharted
map but they know how to read every turn to take to get to their destination.
By the time they reach the fourth song, the
song’s tempo changes tell you more about their uniqueness. Lee Blackwell plays
the guitar with the finesse of a matador on the arena, bringing on a certain
south of the border Mexican feel to their sound. A little bit like if Jimi
Hendrix was from Texas and actually enjoyed surf music. Tarek Wegner grooves
and delivers himself into eye rolling oblivion, while James Traeger keeps the
night beat awake.
As they play new songs, I don’t feel that
much out of place for not knowing the band properly since noone has heard those
songs before as well. Hopefully, the new record is out in September and the new
songs have a natural evolution to their sound. Through my ears, you can hear a
little bit of krautrock and if you listen carefully, you can tell that Night
Beats go further than any garage by numbers band out there. They are garagey
but they draw influences from other sources like girl groups and hypnotic
voodoo rock, pulling you deeper into their music as they dwell into their set.
On some moments, they can even conjure up a nice sunshine feel transporting
Galveston to California and vice versa. 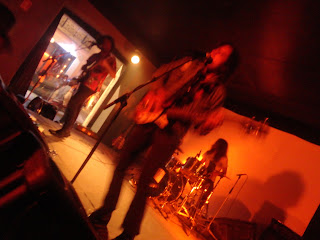 After a great set, they come back ready to
rumble and that’s exactly what they do. After a rendition of the classic Link
Wray song, they deliver a scorching final song that leaves the crowd craving
for some more. They might be based in Seattle but I think it may just bring out
the Texas in them even more and for the rest of the evening, everybody had
surrendered to the calling of this nightly beat.’
Report made by Carlos Ferreira/2013
© Copyright
http://psychedelicbaby.blogspot.com/2013
Carlos FerreiraLive ReportNight Beats