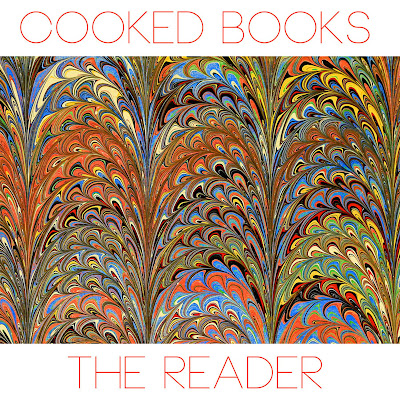 Their debut album The Reader, plagued with
continuous delays including a fire at the pressing plant, is set for release
any day now, a glittery shimmering mixture of fuzz fueled feedback with just
the right amount of pop and left-right combination jaw hooks.  Let’s Pretend Records has been unleashing
some of the most delightfully tweaked pop-punk, psych for years, but they have
something extra special in store for you this time; this time they’re
unleashing Cooked Books on the world.
Cooked Books has been around for a while and the album “a long time
coming”, you can tell.  There’s no filler
here, just tasty riffage from start to finish and sporting just enough of a
lo-fi production job serves to make The Reader one of the best albums I’ve
heard in a long time!  I don’t know how I
hadn’t heard Cooked Books’ totally madcap and insanely original take on the
pop-psych/garage tradition before but I’m glad I remedied that, and trust me
you will be too!  They might claim that
the books are cooked but these guys are the real deal.  So kick back and put on some tunes while you
peep this interview ‘cause it’s a doozy!
All four members of the band were able to shine some light on the band’s
history and what the future has in store for them not to mention everything in
between.  And while you wait for the
album to drop you can check out some streaming songs here
http://www.soundcloud.com/cookedbooks and enjoy some Cooked Books…

What’s the band’s lineup?  Is this
your original lineup?
There’s David (vocals and guitar), Joe
(guitar and backing vocals), Cathleen (bass and backing vocals) and Ben
(drums).  This is the one and only
lineup.
Are any of you in any other bands?
Have you released any material with any other bands?
Cathleen:
I’m not currently in any other bands.
I’ve been in a few over the years and I have some 7″s and CDs under
my bed that I’m not quite sure what to do with now that those bands are long
gone.
Joe:
I put out my first tape when I was fourteen, my grunge band, Angst (no
shit), recorded a dozen songs on a tape player.
Throughout high school and college I put stuff out with various bands,
including a short-run tape with a Carbondale band, North Americans.  Now, besides Cooked Books, I’m also in a
post-punk band called LEGS.  We put out a
self-titled EP on CD and cassette last year.
David:
I’m not currently in any other bands.
I had a psych project called Resting Rooster.  We produced a great deal of recorded material
but only officially released one album a long time ago.  I recently found an unopened copy of it at a
Goodwill store; that was kind of a career highlight for me.
Ben:
I was in a band called Snaarj for a while.  We put out two records.  Besides Cooked Books I’m currently playing
drums in a band called Mike Adams At His Honest Weight and in a band called
Living Well.  I just started playing
guitar in a band called Wet Blankets.
All those bands have records out too.
How and when did you all meet?
Cathleen:
We all met a couple of years ago in the basement of David’s house out in
the woods.  He probably could have easily
killed us all out there, but it worked out OK.
David:
Yeah, it would have been pretty easy.
What led to the formation of Cooked Books and when did it start?
Joe:
Well, I’m the only member who’s lived in Bloomington less than ten
years.  I moved here from New Mexico in
2011 after a couple years working as a newspaper reporter and playing in no
bands.  I came here because I wanted to
finally play some music again.  Not
really knowing anybody, I posted a Craigslist ad titled “garage/psych/loud,”
and met David through that.  He was also
in a kind of musical drought I think, and we spent several months trying to
figure out whether we could write/play together.  Eventually David convinced Cathy and Ben to
drive out to the woods and play one night.
That’s it.
David:
I was in a bit of a drought in general.
At the time I was in the habit of perusing the local craigslist musician
ads for some comic relief, i.e. Christian metal band auditions, cover bands
seeking lead singers, et cetera…  I was
kind of shocked when I found Joe’s ad.  I
never expected to find a project on craigslist that reflected what I wanted to
do musically. 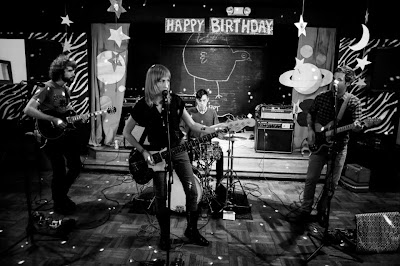 © Jeremy Hogan
Where are you originally from?
Cathleen:
All of us, or the band?  I grew up
in New Jersey, but I’ve been in Bloomington, Indiana for over a decade.
Joe:
I grew up in Teutopolis, Illinois.
It’s just past the big creepy cross on I-70.
David:
I grew up in Indianapolis, Indiana.
I was homeschooled with my three brothers.
Ben:
I’m from Bloomington.
Where is the band located?
Joe:
All of us except David live in Bloomington.
David:
I lived in Bloomington for several years, but moved out to the country
after deciding I wanted a little space.
Can you describe the local scene there?
Cathleen:
Bloomington is a really small town but there’s a lot going on.  And with it being a college town, it’s pretty
transient, so things shift pretty regularly.
Sometimes there are no basements to play, other times there are a bunch.  Sometimes there are tons of great bands,
other times there are serious dry spells.
There’s always a new crop of kids, which can be both awesome and
exhausting, and it’s always interesting to me to see who sticks around.  There are definitely some core groups of
older folks who have put down roots here and are still doing awesome stuff.
Joe:
Yeah, as far as this part of the country goes, I don’t think there are
many music scenes like Bloomington.  Most
of the musicians I know are in at least a couple different bands plus weird
side projects or whatever, and a lot of them are incredible.  Those people also make up a bulk of the
audiences at most shows and it can be a little intimidating.
Are you very involved in the local scene?  Has it played a large role in the history or
evolution of Cooked Books?
Cathleen:
I moved here because of people I knew who played music here.  I wouldn’t be here if it weren’t for the
local scene.  I’ve been attending,
booking and playing shows here for as long as I’ve been here.  Even though most of us didn’t know each other
when we started playing together, we knew of each other’s old bands.  Cooked Books is just a part of the continuing
history of Bloomington music.
Joe:
Yeah, my story is pretty similar to Cathy’s.  That’s the reason I came here.
David:
It’s kind of hard to say what kind of impact the local scene has had on
Cooked Books, but it definitely has shaped me a musician.  It’s probably safe to say that it’s had an
impact on all of us in some fashion.
Some of my favorite bands are Bloomington bands, and some of my greatest
moments of inspiration and motivation have come from attending local basement
shows and developing relationships with the individuals who comprise the local
scene.
I
don’t like to label or classify music; can you describe Cooked Books’ sound to
our readers?
Joe:
Our semi-official bio uses the words “heavy psychedelia, frenzied power
pop and raw punk rock.”  Which I think
means: just loud enough.
David:
We all kind of have the brains of pop songwriters and the fingers of
something heavier and darker, and it all kind of comes together somewhere in
the middle.
Can you talk about your music influences?  What about as a band as opposed to
individuals?
Joe:
Thee Oh Sees, The Slits, John Maus.
As a band, we’ve learned a bunch of covers by The Undertones
recently.  If we’re lucky David will
start singing in an Irish accent.
David:
In terms of overall band influences, I think you could Venn diagram this
shit out: Joe and I are both into Thee Oh Sees, Ty Segall, and the like.  Cathy and I are both into Television, The
Buzzcocks, The Undertones, and a lot of 70’s punk bands.  Ben and I have shared guilty pleasures in the
pop music realm.
You are preparing to release your album, The Reader, on Let’s Pretend Records
extremely soon.  What can our readers
expect from the album?  When is it
planned for release?  What format, or
formats is the album going to be available in?
David:
We are releasing The Reader, a ten song LP on 12” white vinyl.  Due to several unforeseen setbacks that have
already occurred, we are hesitant to announce a specific release date.  That being said, we have approved the test
pressings and expect the finished product very soon.  In addition to vinyl it will be available via
Bandcamp, iTunes and all of the other usual digital stores.
Can you tell us a little bit about the recording of The Reader?  Where was it recorded?  Who recorded it?
Cathleen:
We recorded with Mike Bridavsky at Russian Recording in
Bloomington.  We drank some coffee and
some beers.  We hung out with cats.  We ate soup.
Mike is great. 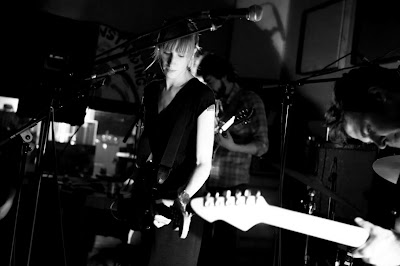 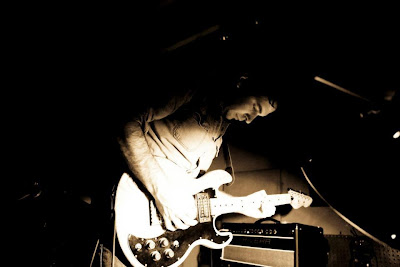 © Jeremy Hogan
I
ask everyone I talk to this question because I absolutely love hearing new
bands.  I’m always on the hunt for new
and amazing musicians.  Who should I be
listening to from your local scene or area that I might not have heard of?
Cathleen:
I really like The Purple 7.  Joe’s
other band LEGS is really great too.
Joe:
My new favorite band in Bloomington is Dracula Pills, I believe they are
self-described “tough stuff”; and Kam Kama too.
David:
Too many to list, but I’ve been really into the Purple 7, Thee Open Sex,
Apache Dropout, Dead Beach, The Sands, Kam Kama and LEGS.
Ben:
Kam Kama.  Elephant Micah.
What about nationally and internationally?
David:
I typically listen to a mixture of new and old music: I really like the
new Sic Alps record; I’ve also recently reignited my fascination with Love and
Moby Grape.  Why am I listening to all of
these California bands?  Its summertime
music I suppose.
Joe:
You ever hear of Hank Williams, Jr.?
Is there anything that I missed or that you’d just like to talk about?
Ben:
I have a great recipe for banana chocolate chip muffins if you want it.
Joe:  Yeah, you don’t want it. 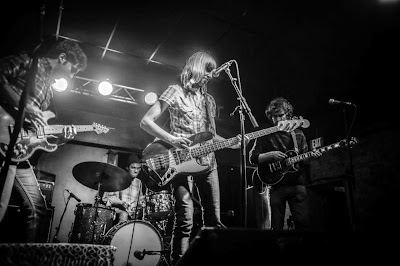