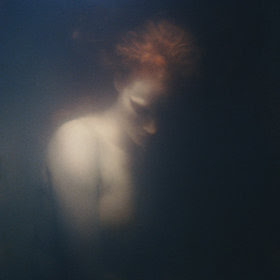 Lotte Kestner “The Bluebird of Happiness”
(Saint Marie 2013)
Lotte Kestner is the nom de rock of
Trespassers William vocalist Anna-Lynne Williams. Her sophomore solo album is a
collection of intimate bedroom recordings (literally – she recorded them in
various bedrooms across Seattle!) The hushed tones and whispered vocals sound
like she didn’t want to disturb anyone in the front room, but they add an eerie
aura to her aching tales of woe (the album title is no doubt ironic!)
“Wrestler’’ has a swaying Leonard Cohen vibe,
Damien Jurado duets on the tearful campfire headnodder “Turn The Wolves”, and
the whole experience is full of nostalgic ruminations and thousand yard stares.
Williams occasionally invites guests to fill out her sound, such as Amar
Gudjonsson (from Icelanders, Leaves) who adds a lovely piano backing to “Pairs”
and Anomie Belle’s tasteful violin flourishes on “Cliff.” There’s a haunting
echo floating through “Halo” that adds an even more otherworldly feeling to the
already eerie tune and “When It’s Time” will absolutely crush anyone going
through a difficult breakup.
These delicate tearjerkers tug at the
heartstrings like a fragile Joni Mitchell or the more wistful daydreams of Mark
Kozelek and are recommended to anyone interested in whiling away a rainy
afternoon or a cold quiet evening updating their own diary while Williams’
stripped down  confessionals provide a
suitably stark soundtrack. And as for that name? Well, Williams says it’s a
symbol of unrequited love, based on a character in Goethe’s “Die Leiden des
jungen Werthers” (1774), which led to a brace of suicides upon publication.
After listening to “The Bluebird of Happiness”, one can understand her
inspiration, as she perfectly captures the painful drudgery of never realizing
that perfect love.
Review made by Jeff Penczak/2013
© Copyright
http://psychedelicbaby.blogspot.com/2013
Jeff PenczakLotte KestnerReviews