The Spoils of War interview with Jim Cuomo

The Spoils of War interview with Jim Cuomo 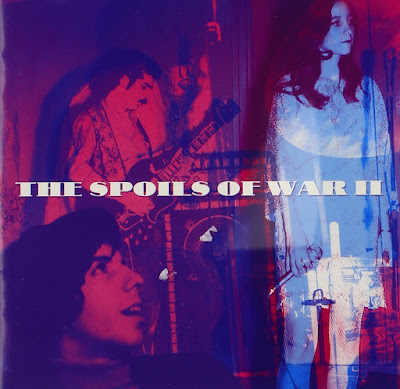 Interview about the Spoils of War and Mormos with composer Jim Cuomo.
You are a North Texas University graduate
earning a Bachelors of Arts in 1966. You then attended the University of
Illinois where you earned your Masters Degree in Music, 1970. During your tenure at University of Illinois
at Champaign Urbana, you formed The Spoils of War.
North Texas State University at that time
indeed had a fine music department but I was being led into teaching with a
major in dance band – the word jazz having not yet gained acceptance. I didn’t
want to teach nor have a college degree with that specialty forever noted, I
found a major that predated the music department and that still existed =
Bachelor of Arts with a major in music. It required and I wanted a much broader
palette = language, history, mathematics, and other more general studies. My
four-year stay at the University of Illinois was full of composing. I formed
Spoils of War in order to perform many of these.
How did you get involved with music?
The first album I remember was Schubert’s
Unfinished and Beethoven V. My mother, an immense big band fan was of course delighted when I began playing clarinet. Benny Goodman, anyone? My grandfather
insured that Verdi, Puccini, and Mascagni were not slighted. One day, 13 years
old I was looking through the record bins at the local emporium and found a
strange album. There were only four musicians yet they had a fourteen-minute
track. What could you possibly do for fourteen minutes. Thus I first heard Paul
Desmond.
Did you have any bands before The Spoils of
War?
As a teenager I was in a great rock
instrumental band – The Cool Notes. Sam Houston Andrew was the guitarist!
Matching shirts, instrumental rock repertoire (Tequila, Peter Gunn, Rebel
Rouser) two saxes, guitar, drums. – 1960. 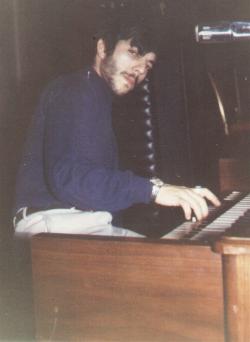 Tell us about the lessons you took in
University of Illinois where you earned your Master Degree in Music. You had
been a student of Samuel Adler, Herbert Brun, Kenneth Gaburo, Salvatore
Martirano and Ben Johnston…
After studying with Adler in Texas I moved
to Illinois to pursue my composition work. Each of those composers brought a
different sensibility to composition and to teaching it. Many of the
“lessons” were of the sort, over coffee. “Are you composing?” “Yes” “Good. Keep it up.” Because of the wonderful
reputation as precursors to using computers to compose (Illiac) this school
pulled me into programming. I’m still using skills I learned there.

How did you decide to use the name “The Spoils of War”?
The name is from a musical instrument
invented by Harry Partch using spent artillery shells. 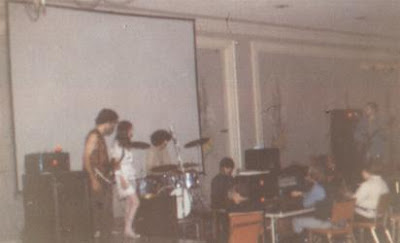 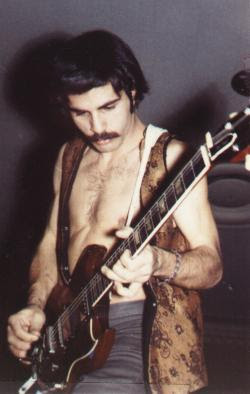 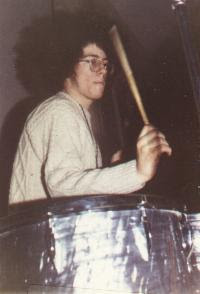 Where did you record your material?
The Spoils of War EP (7 inch vinyl 33 1/3
rpm – nine minutes per side.) was recorded at Rofran (Roger’s studio) in
Urbana, Illinois. We only had two-tracks thus necessitating pre-mixing,
bouncing down, and great care. 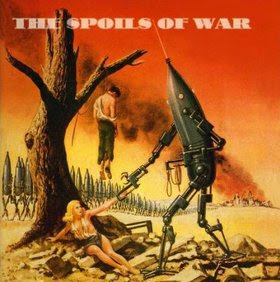 What can you tell us about the material
appeared on the LP? What are some of the strongest memories from recording and
producing it?
I wanted to incorporate my work in musique
concrete with real musicians. I found Al and Roger already playing together.
Then Frank, the son of a wonderful violist(!), completed the rhythm section. Al
was also a great guitar soloist. Annie’s arrival was wonderful. A life-long
friendship was forged. The thrill of having found such a wonderful group of
understanding musicians was enough to prove the idea a good one.
What was the concept?
The idea was to merge songs, psychedelic
anthems, and electronic textures into two nine-minute pieces. Once we began
creating improvisations together I knew we could do it. It worked.
How was the LP released?
We eventually found a small company that
agreed to press an Extended Play. This format was already on the way out having
achieved little market penetration. We pressed 1000 and sold most of them.

In 2005 Shadoks released II, which was
a collection of your work. Tell us more about it.
The Shadoks releases need some explanation. Before the EP we had produced a demo tape, reproduced and available on reel-to-reel tape, to get gigs. That didn’t work. Shadoks had obtained this tape and used it to open the CD.
The EP was then included. Then Cuomo’s
Record (also an EP) from 1969 was included. Having had some success with
SOW I (soldout quickly), I was asked to find more material –
especially performances. I indeed did find both studio tracks and live
recordings. As there was not enough
found, we decided to expand the meaning of “Spoils of War” in order
to include music I’d written into the mid-70’s. 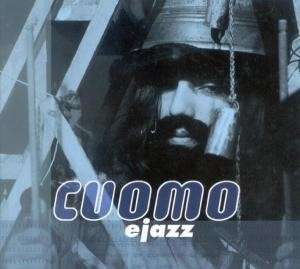 Do you consider yourself to be more of a
musician, a composer or equally both? As we know your music was complex and touched upon various
styles from Folk to Jazz, Psychedelia, to Electronica. In fact, you are a
progenitor of Electronic music. Your
current work reflects some of that…
I am a composer. My favorite recent piece
is Phya’s Testimony. Some have said my career suffers from lack of
focus although my results I hope belie that. At first classical. I was never
disciplined enough to become a classical clarinetist. I tried Weber, Mozart, Bernstein,
even Berg with scant success. Once I discovered my ability to improvise my life
changed – this was at 14. My heroes switched to Paul Desmond, Bill Evans, and
Clifford, Cannonball, Miles … Coltrane. Along the way I was picking up Webern
(!!!) Stockhausen, Boulez, Berio. When confronted with the real world I was
called upon to play with guitar playing singer-songwriters whose art was
simpler, often more poetic but whose music certainly did not rival Ellington.
So I was a snob. But only briefly. Once in France, I was meeting truly
extraordinary musicians who couldn’t read music !! This was new to me after my
university training. I quickly snapped out of it and began playing with a wide
variety of melodies and rhythms and in an astounding variety of styles. (The
proof of the variety of my experiences is evident by citing three artists –
John Cage, Marianne Faithfull, and Yves Montand. No wonder my career seems to
lack focus.) Electronic music, as defined simply as the use of electrically
generated sounds, fascinated me from the start. Musique Concrete (composition
using manipulation of existing sounds.) although taking an enormous amount of
time also entranced me and many of my first pieces used these methods. Now with
digital manipulation, sounds that formerly took weeks to sculpt can now be done
in minutes (and undone in seconds !) I don’t miss the hours of razor-blade tape
editing, but there was a certain romance, a certain sense of accomplishment
when two or three seconds of sound finally took shape after two or three days.
Did you experiment with any hallucinogens
while creating your music?
Anyone who claims to compose or improvise
while on acid, either is lying, has mediocre results, or at least really weak
acid.
What influenced your the most?
The only real influence was the wonderment
of hearing Stravinsky and imagining the process, of hearing Basie swing and
finding out how to do it, of being entranced by Debussy and seeking to do it
too. Thus the emotional and the mathematical were wed – I was always good with
numbers. 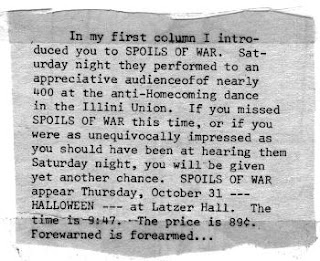 Did you play any shows with the
band?
The Spoils of War never toured. Our gigs were centered around Champaign, Illinois and were always extravaganzas of volume and visuals. As a soloist I have immense experience touring throughout the world. Lucky lad. 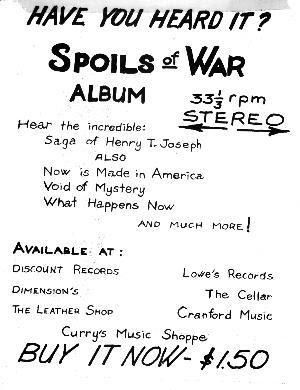 You had another very interesting project called Mormos.
After SOW I became musical director of the La Mama Experimental Theatre Club – La Mama E.T.C. – in New York. I had already put on the musical director/arranger hat and had almost stopped playing saxophone. One of our first tours was to Europe. After one of our performances, my dressing room was visited by Eugene Ionesco, the playright himself. He was looking for the musical director in order to congratulate him – me! After that it was a cinch. I had to stay in Paris. I stayed for all told thirty years. Another dressing room visitor was a journalist who was wandering about backstage. He heard us rehearsing a side project – the as yet unnamed band Mormos. He gave us an address where we could play a short showcase set and even make a few francs. From that first gig at Chez Georges out wonderful band developed. We needed a name – Sandy Spencer had just read some allegory about the misty mountains. I had just been reading about flying demigods depicted in Australian aboriginal art – Mormos. So we were to be (for one night) the Misty Mountain Mormos. 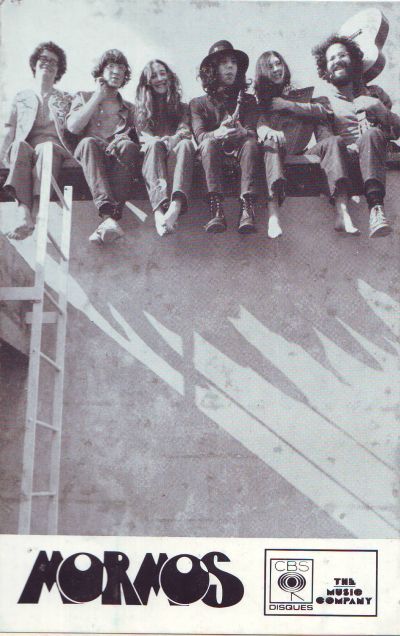 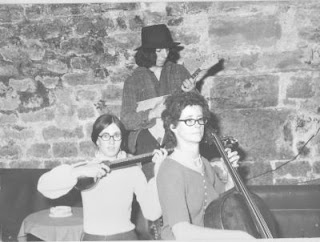 That was too long for the marquee so it was reduced to Mormos.
So little thought went into a name that has been with me ever since! Sandy,
Dianne Taylor, and I were Mormos and recorded a first album as such. We then
went back to the states to finish things off for what we thought would be a few
month stay in Europe. While there I jammed with old friends, Annie Hat, Elliott
Delman (guitar), and Rick Mansfield (flute), and rekindled a musical
collaboration that continues today. When we returned to Paris as a six-piece we
recorded a few more songs and craftily interspersed them with the trio
recordings. Thus “The Great Wall of China” was released to some
acclaim. Above all it generated gigs of all kinds – concerts, television,
radio, tours, we even played at half-time for a soccer match. By then I had
started playing saxophone again. I did sessions for dozens of French artists
and still do. Mormos did two albums for CBS. Live we had developed into
something like an acoustic Grateful Dead. As most still thought and still think
that acoustic music means folk music, we were called a folk band despite the
total lack of any folk music influence or reference. The complications of
relocating to Great Britain finally ended the band but not before Annie and I
were able to perform in Romania, Algeria, Liberia, and the Ivory Coast. 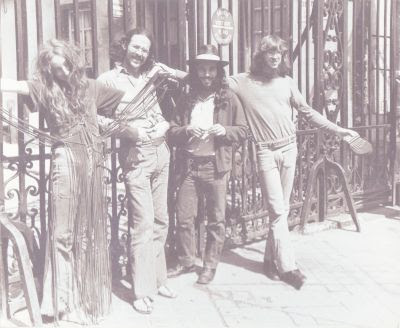 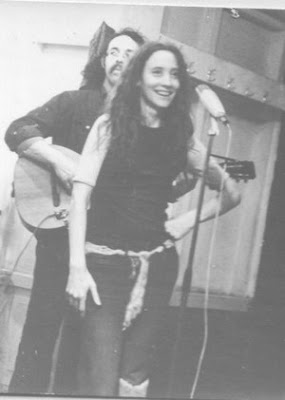 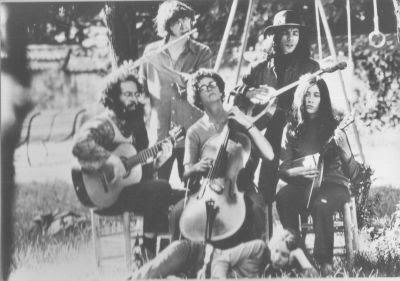 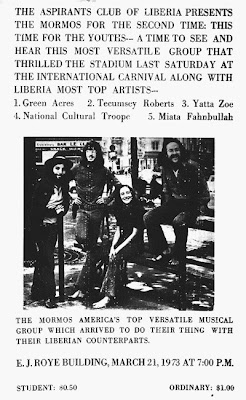 Spoils of War and Mormos – essentially that
is my contribution to psychedelic music. This was only discovered much later. I
don’t think any of us even imagined a category. 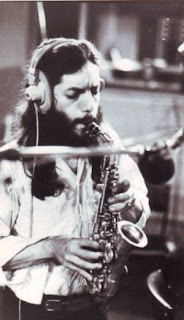 What are you currently up to?
I currently live in Melbourne and am
writing songs and music for a huge brass ensemble – the Moreland City Brass.
This group has existed since 1882 !!!
Any future plans you would like to share
with us?
The Canticle of the Sun by Jim Cuomo and
Jean-Pierre Arnoux (sung by Victoria Rummler) and my new collection – “Lately” consisting of
Flutterby for two Ukuleles and slide guitar, and Prairial, Due Day, and Gold
Fix (this is featured music for the film – “Late For My Mother’s Funeral” by Penny Allen)
These ten works are thus added to the cloud joining the two collections
“Significant Bits” and “Sim City” Finally – the eBook
“Why I Don’t Read Fiction”. All for $8. This is my plan for 2013. Please support living composers. www.jimcuomo.com 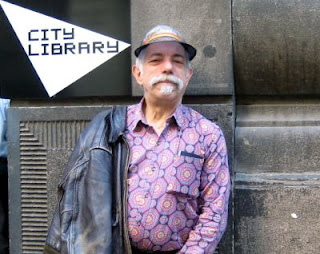 Thank you.
Any music can be psychedelic, no stimulants
needed. Just use your brain to drift through the melodies, harmonies, and
rhythms. Dream aloud.
Gigalert – Chicago “The Hideout”
Thursday, March 28 !!!