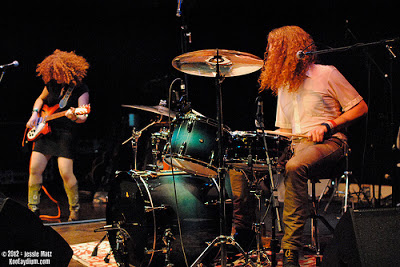 You mentioned seeing several duos live (The White Stripes being probably the most notable along with The Kills, who’s lead singer Allison Mosshart, would go on to join Jack White in one of his later projects The Dead Weather). Had you already experimented with the two piece band format at the time or did that open the door for White Mystery?
I started my first duo The Red Lights at age 15, because it was originally supposed to be a three piece, but the third member dropped out. So it was just us two girls left standing, and that became an efficient rock’n’roll package that extended into my subsequent two piece Miss Alex White & Chris Playboy. Additional influential two pieces to throw in the mix are Mr. Airplane Man, a female two piece that played Chicago during my teens, and Flat Duo Jets with Dex Romwebber.
Since White Mystery evolved from the recording project Forestbride can you give us a little background on that project and it’s evolution into White Mystery?
Forestbride started as basement recording project made possible by the introduction of a little program called Garageband and a website called MySpace. We witnessed the streaming music revolution! Francis and I started layering tracks and making songs that would become White Mystery tunes, like “Ye Olde Stone.”
http://www.myspace.com/forestbrideforever
What was your house hold like growing up? It seems like your parents must have been pretty musical since you and your brother ended up in a rock band and they don’t seem to have a problem with it!
It was fun and crazy, like Pee Wee’s Playhouse, with curly-headed people.
Besides the bands we’ve already talked about who influenced your musical approach as a kid? Not necessarily the sound or musical angle. White Mystery seems to have a “philosophy” behind it. Is that something you took away from your studies in school or from paying attention to other artists?
Besides all the oldies, the Who were the first band to blow my mind. Then the MC5. Kick out the jams, brothers and sisters.
You have been involved with the Chicago scene for a long while now and you keep tabs on what is going on with the music scene. Is there anyone that you would recommend “It’s Psychedelic Baby” readers check out in in the Chicago scene? Who would you recommend people being listening to nationally and internationally?
Twin Peaks
The Orwells
Slushy
Sons of the West
Uh Bones
The Bingers
Negative Scanners
E.T. Habit
Nude Sunrise
2012 was a busy year for Miss Alex White and White Mystery and 2013 is already proving to be another big year. As of January they have already announced their first European tour and a third full-length, self-released, CD/LP due out on April 20th (available for pre-order NOW from WhiteMystery.com ). Make sure to keep an eye on http://www.whitemystery.com/blog for up to date details about upcoming shows, new releases and other exciting happenings in the White Mystery universe!
DISCOGRAPHY
(2003) Miss Alex White and Chris Playboy – “Young Monsters” – Missile X Records – 7″
(2005) Miss Alex White And The Red Orchestra – “S/T” – In The Red Records – CD/12″
(2005) Hot Machines – “Hole In My Heart” – Cass Records – 7″
(2006) Hot Machines – “Hot Machines 2″ – Dusty Medical Records – 7”
(2006) Candy Apple Killings – “Leather For Liquor” – Solid Sex Lovie Doll Records – 7″
(2006) Miss Alex White & Chris Playboy – “Live” – In The Red Records – 12″
(2007) Miss Alex White And The Red Orchestra – “Space & Time” – In The Red Records – CD/12″
(2009) White Mystery/Black Apple – “Split” – Swirly Vinyl Records – 7”
(2009) White Mystery – “Powerglove” – Hozac Records Hookup Club – 7″
(2009) White Mystery – “Take A Walk” – Whistler Records – 7″
(2010) Various Artists – “Hookup Club Vol. 1″ – Hozac Records – CD/12”
(2010) Schiller Killers/ I.V. Club – “Split” – Rubber Vomit Records – 7″
(2010) White Mystery – “Self-Titled” – White Mystery Band Records – CD/12″
(2011) White Mystery – “Blood & Venom” – White Mystery Band Records – CD/12″
(2012) White Mystery – “People Power” – Perpetrator Records – 7″
(2013) White Mystery – “Telepathic” – White Mystery Band Records – CD/12″
– Roman Rathert
InterviewRoman RathertWhite Mystery